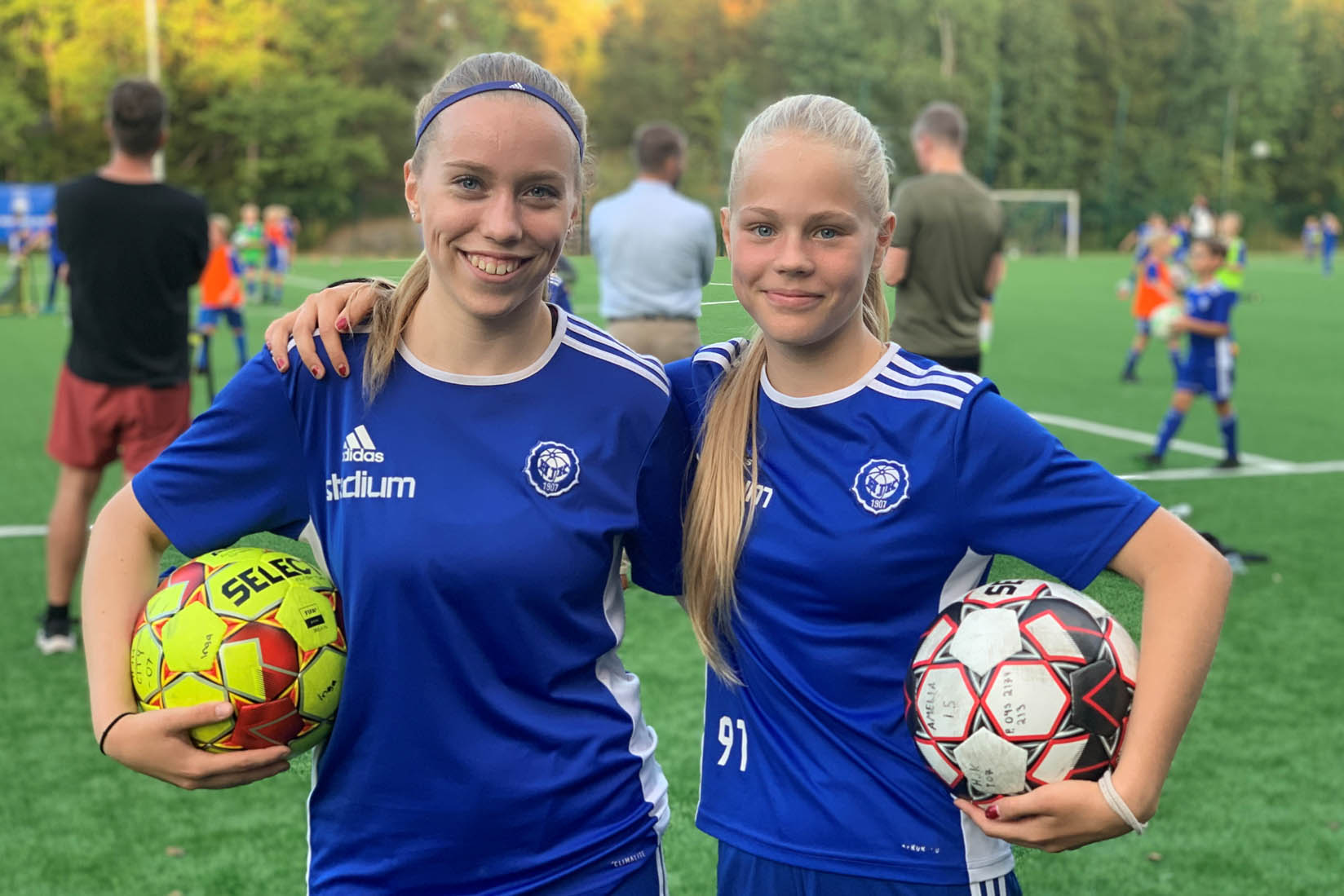 The European Union is casting a critical eye on the rubber crumbs used as filler on football pitches, because of the problem with microplastics. In Helsinki, a new pitch with artificial turf and pine-based filler was opened.

The HJK Helsinki football club has installed an artificial turf surface with a new type of filler made of pine, at the same time as the European Union is expected to start paying critical attention to rubber crumbs.

The pitch with the environmentally friendly filler material was opened adjacent to the Central Park in Helsinki in August 2022.

Before the day’s training session, Inga Widbom, 15, and  Elena Naava, 14, of HJK’s junior team, said they were pleased with the new wood-based pitch.

The new turf feels soft and may be a bit more slippery, but that has no impact on the play.  I’ve got no complaints.

’The new turf feels soft and may be a bit more slippery, but that has no impact on the play.  I’ve got no complaints,’ says Widbom.

Naava says the new pitch is even better than a traditional artificial turf.

’The pitch smells fresh. The black crumbs we had before got stuck in your cleats and other kit. They got everywhere. It makes life easier when you don’t have to vacuum at home because of them. I think it’s really neat that people develop these new ecological things,’ Naava says.

Microplastics end up in the environment

There are over 400 football pitches in Finland. The spiky green artificial turf is made of synthetic material that is more resistant to wear and weather than natural turf.

The filler on most pitches is rubber crumbs from used car tyres.

The same material is in general use elsewhere in Europe. In Germany, for example, about half of the pitches use rubber crumbs under the artificial turf.

The European Chemicals Agency (ECHA) began to study the health and environmental impacts of the rubber crumbs about five years ago. There was actually talk of a possible carcinogenic effect, but no significant problems related to airborne particles have been detected on indoor football pitches.

According to the Finnish Environment Institute, rubber crumbs are transferred to the vicinity of pitches with maintenance equipment and players’ kit, for example. Some also end up in stormwater inlets and outside the pitch area.

The wood-based pitch is the third of its kind in Helsinki. HJK’s Venue Manager Antti-Jussi Väinölä stresses that this is still a trial. The club administration takes careful note of what the players feel about the new material.

’We place a lot of weight on the feedback from children, young players and coaches. We’re in the vanguard here, in terms of the whole country,’ says Väinölä.

No one has complained about splinters. A goalie tested the material by taking leaps and lunges, and they could hardly find words for how good they thought it was.

Väinölä, too, notes that the first comments have been encouraging.

’No one has complained about splinters. A goalie tested the material by taking leaps and lunges, and they could hardly find words for how good they thought it was.’ Väinölä says.

The location of this particular pitch adjacent to the Central Park made it even more important to pay attention to the environment. HJK considered a more ecological artificial turf, and the options available included materials made of olive pits and cork.

’Ecology is an important value for us. After serving its purpose on the pitch, the wood can be recycled, and it causes less destruction to nature than rubber crumbs do,’ Väinölä says.

’Great interest in the international market’

’Therefore, whoever can develop a bio-filer that is ecological, meets the players’ needs and is resistant to weather, will be of great interest in the international market,’ Arhinmäki tweeted on Friday.

The wood material used by HJK was imported by the Finnish company Lappset Oy. In addition to artificial turf, the company is known for its playground equipment made of pine.

Pasi Riikonen, Concept Manager at Lappset, says the company became aware five years ago that the EU had started paying attention to the ecology of football pitches.

The production process includes 11 to 15 stages, arriving at a material suitable for playing fields. It must meet the standards of the International Federation of Association Football (FIFA) and be hard-wearing.

Lappset Oy began to study several more natural options, and decided to start collaboration with a U.S. company, since they do not have the capacity for long-term product development for the moment. The wood material is made of American ponderosa pine, which is harder than the Scots pine growing in Finland.

’The production process includes 11 to 15 stages, arriving at a material suitable for playing fields. It must meet the standards of the International Federation of Association Football (FIFA) and be hard-wearing. Among other things, the wood is treated in drums and heat-treated to produce a particular shape. For this, a dedicated production line was developed, so this is not an industrial sidestream,’ Riikonen says.

Similar product from pines in the north?

Speaking of product development, Riikonen stresses that Lappset wants to award a ten-year guarantee, and this means they do not want to enter the market with a product that is not thoroughly tested. It might be possible to use  the hard-grained Scots pine growing in the north of Finland.

’What we want is to use Finnish raw materials and make products in Finland for the European market. However, for that to make sense, the volume must be big enough,’ Riikonen says.

It’s a great triumph for wood if this product really works on football pitches.

According to Riikonen, a wood-based pitch costs about one fifth more than a pitch made with rubber crumbs.

Using wood for the filler for sports facilities is not an innovation as such.

’Finns have long used sawdust as the base for jogging trails,’ Riikonen points out.

As regards the advantages of wood-based football pitches, Riikonen mentions that children’s allergies can be reduced by using wood and other organic materials.

’It’s a great triumph for wood if this product really works on football pitches,’ Riikonen says.

Thanks for highlighting this widespread problem with 3G pitches