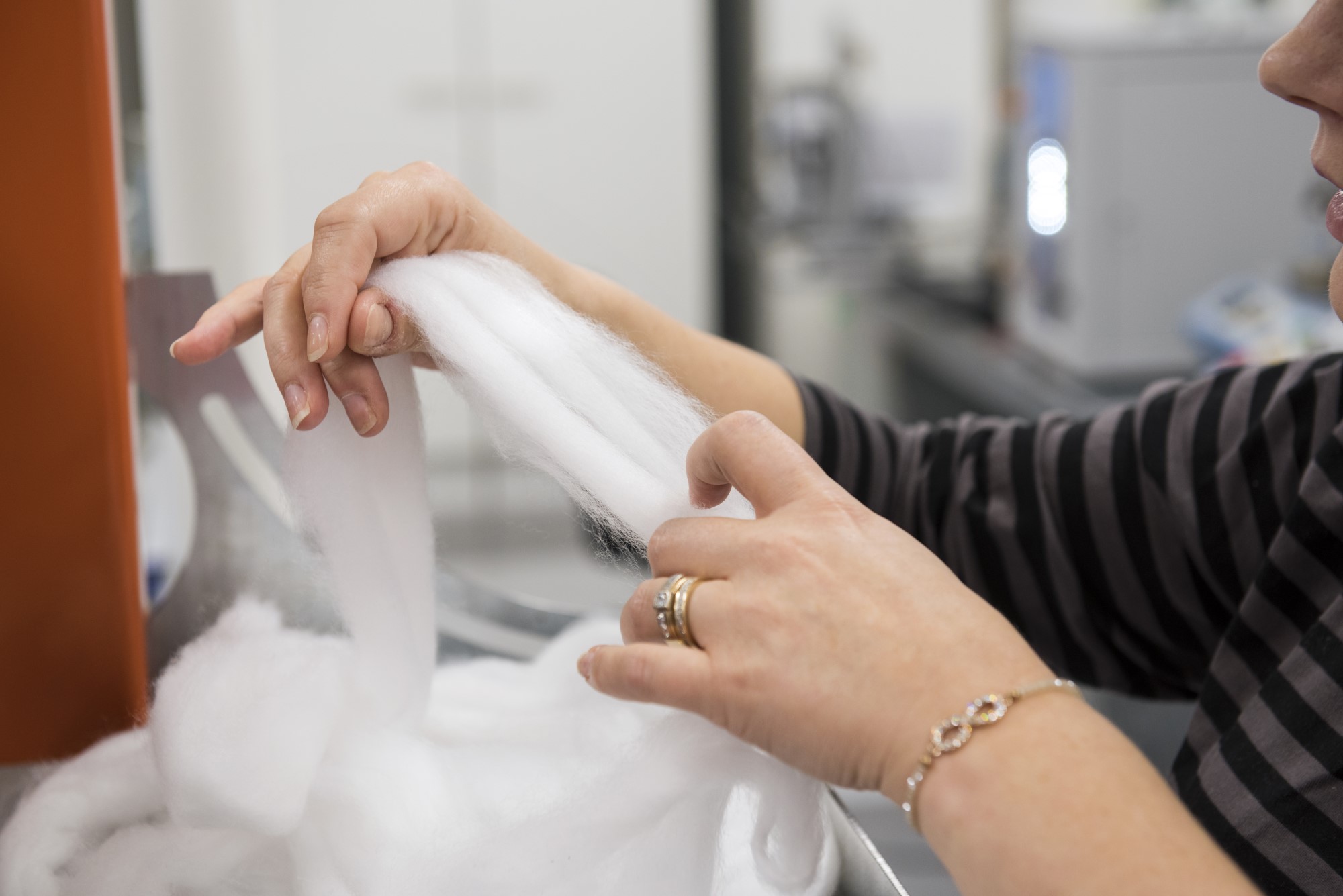 Spinnova fiber is fluffy and as warm as lamb wool. Its stretch and strength qualities are very similar to those of cotton. Photo: Spinnova

In Jyväskylä, Central Finland, a new wave of textiles for the clothing industry are being boldly developed. The Finnish startup Spinnova is known to be the only company in the world that manufactures wood-based textile fibers completely free of chemicals.

There are big challenges facing the textile industry. Not only does it have to source sufficient volume of quality material, but it must do this with minimal environmental impact. Current fibre sources are problematic: the cultivation of cotton takes up a lot of arable land and needs huge amounts of water in its production process; oil-based fibres pollute the environment with, among other things, micro-plastics; and many chemicals are needed to produce synthetic fibres.

Spinnova’s innovative solution is to produce textile fibres from wood-based materials mechanically. In its process, softwood pulp is transformed into a material like sheep’s wool without using a single chemical.

“In practice, it would even be safe to eat the fibre we produce,” says Janne Poranen, CEO of Spinnova.

According to the company, 99% less water is utilised in its process than in the production of cotton fibres.

Spinnova started production at its pilot plant a year ago and is showing such promising results that it has doubled its staff in a year and now employs 25 people full time.

The pilot plant in Jyväskylä is currently producing textile fibre that is being trialed and tested in partnership with fabric and clothing manufacturers. These include the Finnish design house Marimekko and the Norwegian outdoor manufacturer Bergans.

“Our goal for this year and next is to finalise the optimisation of our first industrial concept,” says Poranen.

There is room in the market

The size of the world textile market, measured in terms of fibre, is over 100 million tonnes per year. Polyester and other oil-based fibres comprise over half of this quantity while cotton accounts for about a further quarter. Other fibres, including viscose and wool, have a much smaller share of the market.

Initially, Spinnova’s fibre production would cover only a tiny fraction of the global textile market. Poranen estimates that the Spinnova plant could produce between 50 and 100 thousand tonnes of textile fibres each year.

However, the significance of the product lies beyond any projected production capacity. The current fibre market is unable to grow in line with the demand created by global population growth. Therefore, the world needs new sources of textile materials and these need to be sustainable and environmentally friendly.

“This is quite simply a winning concept: producing textile raw material while allowing arable land to be used for food production,” Poranen says.

Spinnova is not the only company currently developing textile fiber from wood-based material. Stora Enso, for example, is transforming dissolved cellulose into fabrics using the Ioncell method. This fabric made headlines when the Finland’s First Lady Jenni Haukio celebrated independence in wood-fibre gown at the Independence Day Reception 2018.

In the Ioncell method, the chemicals burdening the textile industry are replaced by a safer, ionised liquid that dissolves wood cellulose. Spinnova, on the other hand, distinguishes itself by having a completely mechanical manufacturing process. According to its website, it is known to be the only manufacturer in the world to produce fibre completely chemical-free.

The factory will come, only the schedule is open

In the future, Spinnova plans to construct a textile mill that is connected to an existing pulp mill. This would make it possible to integrate the pulp mill’s processes with the manufacturing of Spinnova’s material, thus avoiding unnecessary waste streams.

Spinnova’s fibre can be manufactured out of practically any kind of wood. The company’s main procurement partner is the Brazilian pulp giant Suzano Papel e Celulose, which makes pulp from eucalyptus but Spinnova can also utilise the long-fibre pulp derived from local softwoods.

Spinnova began developing within the VTT Technical Research Centre of Finland Ltd, before becoming it’s own company in 2014. Since then the company has announced that it plans to build a facility for producing textile fibre – Spinnova fibre.

Poranen says he has complete faith that the product will reach the industrial and commercial stages. The only thing he is uncertain about is the time frame. The work may take two years, or it could be more.

“Of course, we want to be able to make an investment decision about the mill as soon as possible,” Poranen says.

The mill may be constructed in Finland, but other locations are also possible. Poranen says there is no decision on that as yet, and all options are still open.

5 comments on “The Finnish startup Spinnova is transforming the textile industry without burdening the environment: “You can even eat our fibres””

Hey, it’s Huub from Karhu. We like your project, and we love Jyvaskyla, it’s where Karhu was born and raised in a way. If you have the time please reach out to me so we can discuss a possible collaboration. Huub

Thanks, you dear Huub. What kind of collaboration?

I am very happy to know a new fibre is developed.
I am a garment manufacturer in Nairobi. Kenya.
Specialised in shirts.

I developed the first disposable products in 2010 with Norafin/Lenzing… I think we can work together about my new composable range 2011: babies/adults diapers, panties, wippings… Kind regards, Arnaud Gouverneur, President of Ecodeep – Deeply Eco Friendly

In Morocco we produce 120.000 metric tons of fibrs from dattes palmeras in south of morocco.
We are verry interested for technological transfert of Spinova process.