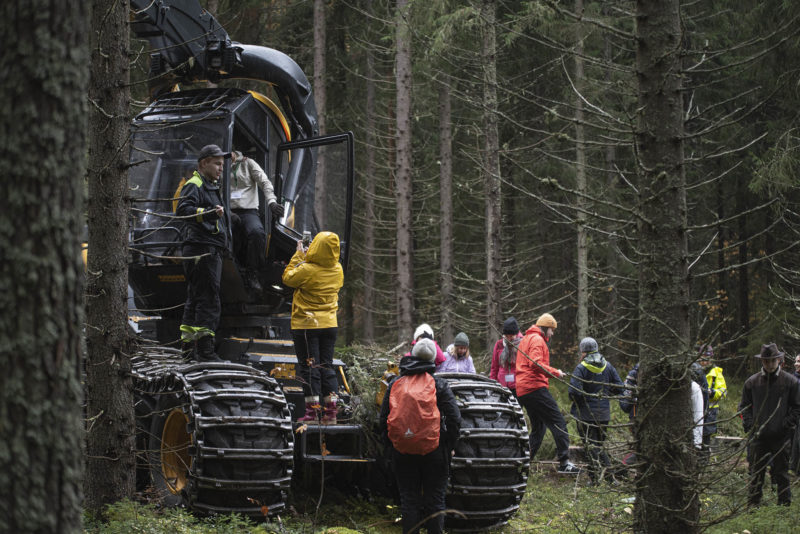 Finnish young people view the utilization of forests more favourably than before, while also placing more value than before on looking after the environment, as is shown by the brand-new Young People’s Forest Barometer survey.

Jussi Westinen, head of research at the market research company Taloustutkimus, says forests have become important for young people in quite a lot of ways.

’During the pandemic, young people spent more time in the forest, just like other age groups. Because of increasing concerns about the economy, young people are likely to place more value on the forest sector as an employer, and concern over climate change is seen in the general appreciation of forests”, Westinen lists.

The new Young People’s Forest Barometer was published in Helsinki on Friday in connection with the National Forest Days event organized by the Finnish Forest Association.

The previous Young People’s Forest Barometer was published in 2019. This time, the majority of the young consider that the main task of forests is to maintain biodiversity. The survey shows that 85 percent of the respondents agree either fully or somewhat with this statement.

The respondents value the environment alongside other forest-related values.

About three quarters (73 percent) considered that Finnish forests are managed well. 68 percent felt that forests should be managed so as to safeguard the wood supply to the forest industry and the products it makes.

’Young people consider that the employment and income provided by forests is important, but at the same time, it is necessary to prevent the loss of biodiversity and combat climate change. The young see this as a ’both and’ issue, Westinen says.

’How to reconcile different interests?’

’The burden imposed on forests keeps growing. The forest sector must pay careful attention to reconciling the differing interests in a way that satisfies everyone, including the young generation,’ Kärkkäinen says.

The share of those holding this opinion has increased by 15 percentage points in three years. More than half (61 percent) consider that jobs in the forest sector provide an opportunity to slow down climate change.

’The young would like to see wood used for products with a high processing value. The responses show the impact of active communication about the new potential of using wood,’ Sirpa Kärkkäinen adds.

The Young People’s Forest Barometer survey was implemented by Taloustutkimus, commissioned by the Finish Forest Association. The survey interviewed 506 young people between the ages of 15 and 25 years. The error margin is about 4.5 percent.

There is an on-going activity to educate young people about the importance of forests. One of the networks engaged in this is Leaf (Learning about Forests), established in 1999 in Finland, Sweden and Norway and now active in 27 countries.

The Leaf network received an important recognition for its innovative work this autumn, in that it was selected to the Global Collection of the HundrED network, which promotes the education of children in 108 countries.

According to Sirpa Kärkkäinen, the essential thing in the activity of Leaf is learning to understand the important role of forests for humans and other living things. This is achieved by taking the children out into nature to learn.

’The forest is a classroom where you learn by doing. We want to maintain the contact between humans and the forest,’ says Kärkkäinen, who has been active in the Leaf network almost from the start.

Activities in line with the principles of the Leaf programme include, among others, the annual Forest Days for Schools, the Forest Quiz for lower secondary school pupils and educational events for teachers, all of which are part of the forest education organized by the Finnish Forest Association.

For some, a forest can help prevent erosion, while to others it represents financial value. In some parts of the world forest is a source of food, shelter and medicine. Yet all of these are dependent on the ecological foundation of forests.

Kärkkäinen points out that with the continuous spread of urbanization, people have less contact with nature.

’Among other Leaf activities, we have planted trees. In towns and cities we plant tiny forests to provide recreation and learning for schools and the people in their vicinity,’ Kärkkäinen says.

Kärkkäinen stresses that from a global perspective, the significance of forests varies depending on the location.

’For some, a forest can help prevent erosion, while to others it represents financial value. In some parts of the world forest is a source of food, shelter and medicine. Yet all of these are dependent on the ecological foundation of forests,’ Kärkkäinen comments.