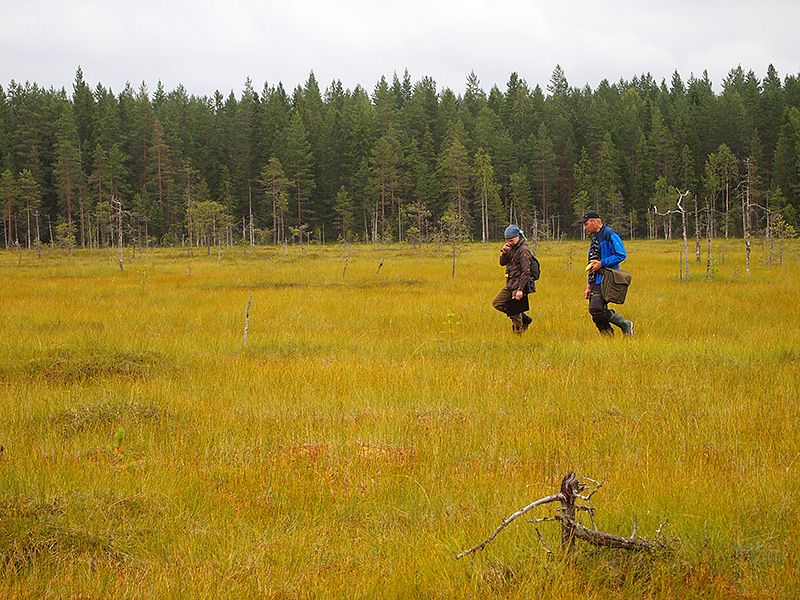 This past summer, terrain inventorying has been carried out to complement mire protection programmes. The draft programme will be finalised by the end of 2014.

The Eskonneva mire in late August smells good. We splash through the varying mire landscape in our rubber boots. The day is overcast but warm, and we are soon drenched with sweat.

We are inventorying nature values in Eskonneva, situated near Pylkönmäki in Saarijärvi, Central Finland. This is necessary for determining whether Eskonneva should be included in the complementary programme for mire protection. The fieldwork for the programme will largely be carried out this summer in most parts of Finland.

The inventorying team at Eskonneva consists of Ms. Kristiina Nyholm, biologist, and Mr. Timo Kypärä, nature surveyor, both working at the Centre for Economic Development, Transport and the Environment (ELY Centre) of Central Finland. They have both been inventorying the mires of Central Finland throughout the summer, excluding their summer holidays, at a rate of 2–3 mires a week.

What does inventorying a mire involve? You have to go through every corner of the mire, normally excluding ditched areas, and to make notes of mire types and their characteristics and other nature values found in the area.

During the past winter they have made a list of possibly valuable mires in the area covered by the ELY centre. The sources of information used in making the list were maps, local knowledge of those working at the centre and contacts from the public.

To be sure, the number of citizens concerned over mires is much lower than of those worried about forests, for example, and their information is less reliable. It is not as easy to evaluate the nature values of a mire as in the case of forests, and even that can often be difficult.

One hundred sites for one summer

All in all, a list of one hundred sites was prepared for Central Finland. Nowadays the results of an inventory are recorded on an observation form in a GPS device. However, pen and paper are also taken along just in case. The device automatically records the coordinates of places where observations are made.

Considering its modest size, in Eskonneva the team must take a long walk; this is because of its shape. Yet it only takes four hours, which is less than on most days and leaves time for other tasks, too.

Traversing a soggy mire is no easy job for someone not accustomed to it, although the conditions are not really bad. Still, this is a far cry from biking in city streets, for example.

Looking at a mire, it is difficult to believe the diversity of life it contains. We find plenty of traces of Common Crane [Grus grus], for example, and manage to frighten one to scuttle away.

We also find the trail of an unidentified animal, but the flattened grass tells us that it has gone towards a nearby lake.

There are only the three of us making the observation round. A letter has been sent beforehand to each of the nine who own a part of this mire. Yet none of them is present.

This no longer astonishes Nyholm. ”In spring we thought that there would be a great interest towards this work among the landowners, but it has turned out otherwise,” she says.

The reason might be that the landowners do not fully understand what biologists mean when they talk about mires. A mire can also be an area of productive forestry – especially if it is ditched.

Despite lack of interest on the local level, at the Central Union of Agricultural Producers and Forest Owners, the MTK, the programme is taken seriously. ”The landowners should take an active interest. If the mire has enough nature values to be protected, we accept the protection. But if it does not, the landowner’s interests must be defended,” says Mr. Tommi Siivonen, a member of the working group preparing the programme and a lawyer at the MTK.

The fieldwork is included in a programme to complement the previous mire protection programmes from 1979 and 1981. It has been found that they did not safeguard mire biodiversity adequately.

”These programmes protect 1.2 million hectares of mires, but these hectares mostly consist of large open mires important for birdlife. On the other hand, the protection rate of eutrophic mires with forest cover is clearly lower,” says Ms. Aulikki Alanen, Senior Environmental Adviser at the Ministry for the Environment.

Nevertheless, the protection rate of mires is not that low. In the whole of Finland, 13 percent of different types of mires are under protection, but the rate is higher in the north and east of Finland. Still, in other parts of the country the average rate is all of six percent.

”But it varies much between different regions, from something under two to nearly ten percent,” says Alanen.

The criteria for protection are relatively strict. Protection should only concern mires of national importance. In addition to this, the links of each site to previous nature protection areas are taken into consideration.

Also, sites important for endangered species are taken into consideration, but the emphasis is on safeguarding a sufficient variety of nature types.

Compensation based on timber or peat

The programme is based on the Nature Conservation Act. It says that the programme must indicate the boundaries of all areas to be protected, and all activities in these areas will be banned immediately after the Government has adopted the programme.

The landowner’s losses will be compensated for, but at a later stage. As to when this takes place, depends on the Government decision, state finances and ultimately on forest owner, whether the owner wants or does not want to sell the area to the state.

The most expensive option is for the state to purchase the area. The other option is that the state only pays compensation for the protection, while the ownership does not change.

Despite its name the programme may protect commercially valuable forests, too. For example, spruce mires are normally in forestry use and, as a matter of fact, it is precisely spruce mires that are sought for protection in the programme.

”Many forest owners have actively tended their spruce mires for timber production purposes. In these cases, it is not difficult to determine the compensation, but this possibility may have come as a surprise to some of those taking part in preparation of the programme,” says Siivonen.

When the Government decided to prepare the programme, the initial estimate of the total area to be protected was around 100,000 hectares.

At last, we sight the crane

We are approaching the northern corner of Eskonneva. Halfway there, we cross a drainage divide. In the middle of the mire runs a winter road, used only when the ground is frozen.

The road consists of two ditches at a distance of ten metres from each other. It has been built by the landowner to transport timber across the mire. The area across from the road has been ditched.

”You can clearly see that the ditching has dried the mire. You can hardly find any nature values to be protected in here,” says Kypärä.

We return along the other side of the mire, and at long last, come across a crane, too. Finally we check a herb-rich area at a corner of the mire and also find many traces of human activity there.

”I can’t say definitely at this stage, but it seems that, in view of the criteria in the programme, this mire is not the most interesting one among those proposed,” Kypärä sums up the day’s work.