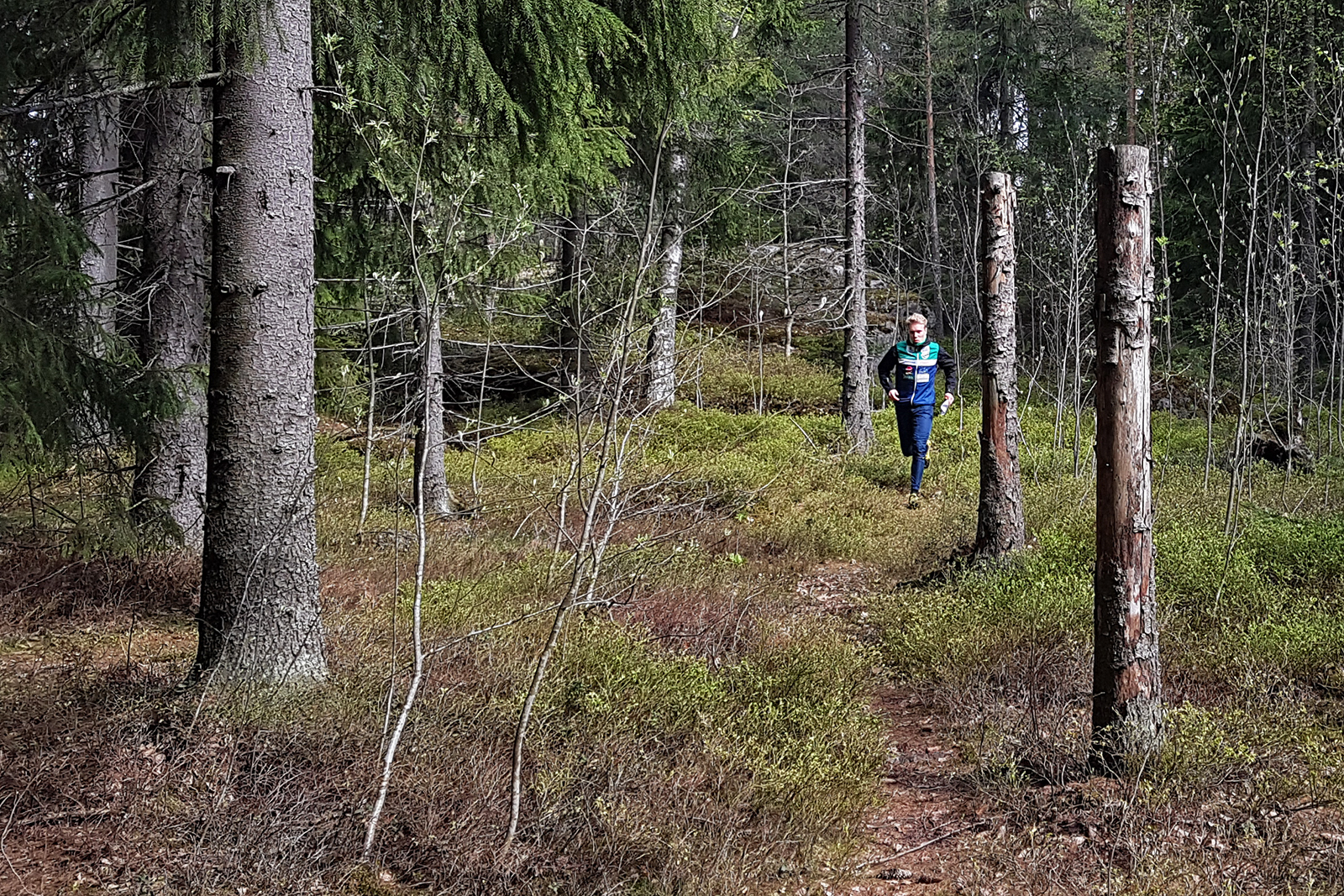 A high stump is a tree cut at the height of 3–4 metres. Photo: Keijo Kallunki

As many as four out of five forest owners want to leave high stumps on their felling sites if they are made aware of this opportunity. High stumps are extremely important for biodiversity and have a long-term effect.

A high stump, also called artificial snag, is created by cutting the stem of a tree at a height of 2–4 metres and leaving the stump standing where it is. The stumps are left to provide deadwood for species dependent on it.

“For many species, high stumps are like lifebuoys. They enable species to survive after fellings until the forest is more or less restored,” says researcher Juha Siitonen from Natural Resources Institute Finland.

To determine the significance of high stumps you need to compare their effect with fellings where none are left. Many such studies have been made, particularly in Sweden, and the findings may come as a surprise.

A biodiversity study made in the early 2000s showed that the population sizes of many least-concern, as well as of threatened, beetle species practically explode on deadwood spared on clear-cutting sites. According to the Monta (Diversity in regenerating commercial forest) project, the increase is clearly more than, say, after a selection cutting.

The effect of leaving the stumps is also fairly sustained. As an example, the number of species increased immediately after the felling by as much as 50 percent and even after three years, it was 25–35 percent greater than before the clear-cutting. It is, however, true that some species living in old forests disappeared.

Polypore fungi benefit less from high stumps than beetles do, as the stumps are too dry for the fungi.

“However, if the top part of the tree is also left on the ground beside the stump, polypores are happy to colonise it,” says Siitonen.

Woodpeckers like to hollow out their nests in high stumps and feed on larvae of longhorn beetles living in the stumps.

“Species which use the woodpecker’s nest cavity later will also benefit,” Siitonen continues.

The forestry company Metsä Group began to offer forest owners the opportunity of leaving high stumps in 2016. This is offered in connection with both intermediate and regeneration fellings.

“Our main purpose is to create a deadwood continuum in the forest. We particularly want to create deadwood in young forests, as they need it most critically,” says Janne Soimasuo, Environmental Manager at Metsä Group.

The purpose of a deadwood continuum is to ensure that there is a sufficient and continuous amount of deadwood at every stage of decay in the forest. In this way, species dependent on different stages of decay can easily transfer to a new tree when the previous one becomes too decayed for their survival.

At first, Metsä Group left two high stumps per hectare. At the start of this year the number was increased to four. Hundreds of high stumps are created every daily on the company’s felling sites.

Leaving high stumps is voluntary for the forest owner, but Metsä Group always offers to do it. Soimasuo says that four out of five forest owners take up the offer.

The cost of leaving high stumps is the price of timber not sold because of them. Since trees sold as logs are not used for this and the aim is to use less valuable trees, such as broadleaves or poor-quality specimens, the maximum cost is one euro per hectare.

Soimasuo says that Metsä Group is planning a survey on the effect of high stumps on forest biodiversity in a couple of years, as soon as the first stumps reach a good stage of decay.

At the start of 2017 Metsähallitus, the company that manages Finland’s state-owned forests, announced the goal of making 100,000 high stumps a year. Since then, the procedure has been included in Metsähallitus’ environmental guide, and leaving high stumps has become part of normal activity.

Metsähallitus leaves high stumps in connection with both regeneration and intermediate fellings.

“If you look at the total number of hectares on our felling sites you’ll see that the annual 100,00 high stumps can be easily achieved,” says Maarit Kaukonen, Environmental Specialist at Metsähallitus.

Metsähallitus has not followed up on the effect of high stumps on biodiversity.

“It may not be all that huge as yet, as trees don’t necessarily decay very much in three years. On the other hand, we focus on birch and aspen, which decay more rapidly,” Kaukonen says.

Siitonen mentions an on-going disturbance dynamics project ,which has gathered extensive data on the beetle species living on deadwood on different types of felling sites, but the data has not yet been analysed.

Similar research is much more common in Sweden. According to Siitonen, the findings from Swedish studies can easily be applied in Finland, too.

I think standing deadwood is important. Here in the UK i dont think we leave enough. We are told that forest harvesters cannot safely cut high stumps. Why can they in Scandinavia- they are the same machines?

Thanks for the comment. All deadwood is important. Ecologists say that we need a continuum of decayed wood, meaning continuum of wood decayed to different stages.

This post was sent to me by a colleague as the practice of leaving 2m to 3m high snags was common in the UK until a few year ago. It was stopped due to health and safety concerns.
I am not an engineer but if I remember correctly, the reason was that harvesting machines are designed to cut the tree at the base and do not lift the tree as they need to do if cut at height. Secondly, if a tree is cut at the base the turning moment in newton metres is only the height of the tree and there is no, or very little, turning force on the base machine. If cut at height the length of the lever, and so the turning moment, becomes the height of the tree plus the length of the boom, add in the wind and this can be significant. The machine may not be able to control the fall of the tree. This could lead to the tree falling dangerously or the base machine overturning.