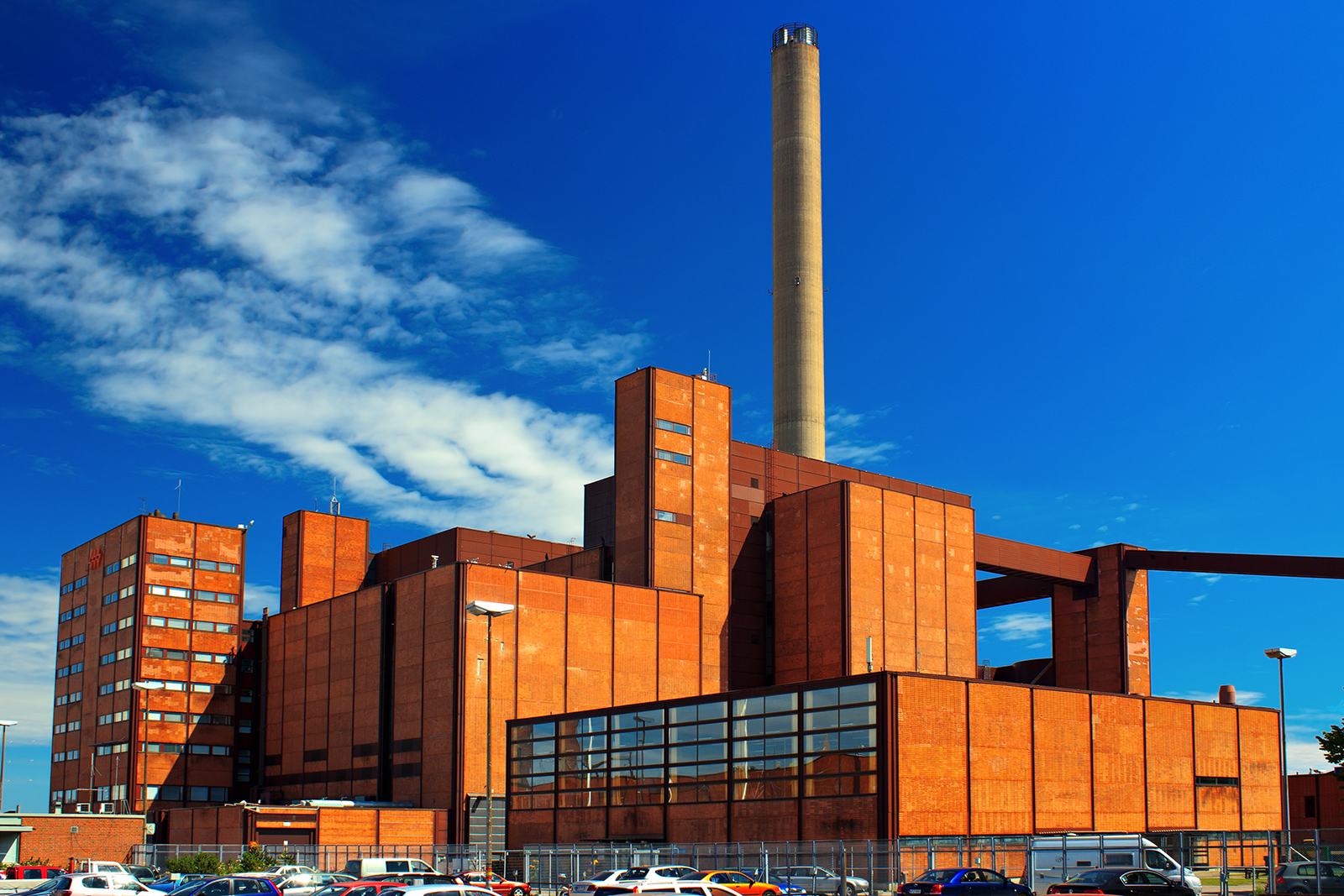 At the Salmisaari combined heat and power (CHP) plant in Helsinki, the share of renewable energy is increased by burning wood pellets together with coal. Increasing the volumes of new wood-based products with high added value would cause serious problems to the generation of wood-based energy in Finland. Photo: Shutterstock

The hoped-for increase in the volumes of new wood products with high added value would significantly decrease the availability of forest energy by 2040. The decrease would correspond to 3–5 times the capacity of Finland’s new power plant Olkiluoto 3, as was estimated in the FutureForest2040 project run by the European Forest Institute and ETLA Economic Research.

Increasing the volumes of new wood-based products with high added value would cause serious problems to the generation of wood-based energy in Finland. This is the conclusion, based on three scenarios on the situation in 2040, calculated by the European Forest Institute and ETLA Economic Research.

The scenarios assumed the share of combined electricity and heat generation and energy generated in industrial processes to be only 5–13 percent in 2040.

At the moment, if the use of industry sidestreams and waste wood are included, about one half of Finland’s wood streams end up as energy. According to advance information by Statistics Finland for 2021, the share of wood-based fuel of the total fuel consumption was 29.7 percent.

If the supply of wood-based fuel drops, the resulting deficit would be 3–5 times as much as the capacity of the Olkiluoto 3 nuclear power plant (1,600 MW).

’With a change that radical, the new production causes a direct reduction in energy availability,’ says researcher Janni Kunttu.

With a change that radical, the new production causes a direct reduction in energy availability.

In a workshop in 2019, a group of experts, researchers, decision-makers, students and other stakeholder representatives of different ages drafted three scenarios for the Finnish forest industry. Some of the group worked in the forest sector, others in the plastics or energy industries, for example.

The three forest sector scenarios created by stakeholders in the workshop were named Biodiversity and Regulated Economy; Circular Economy: A way to sustain abundant life-style? and Era of Social Connection. What the three had in common was a global scarcity of resources and a strive to move away from fossil fuels.

The scenarios expected Finnish forest industry to continue to flourish in 2040. A more diverse range of products was expected, preventing the use of wood for energy. The workshop participants felt that wood was too valuable a raw material to be used as a source of energy.

This development would lead to a sharp decline in wood based energy, and Janni Kunttu explains that this would happen in two ways. Manufacturing products with high added value also requires energy, and the raw materials used for them would not be available for energy production.

How would this energy deficit be replaced? At the moment, no one can tell. Nothing is available on that large a scale.

The new solutions are based on forest industry sidestreams, and to a great extent these are currently used by the industry itself to generate energy in excess of its own needs. In the 2040 scenario, forest industry would have become dependent on external energy sources.

’How would this energy deficit be replaced? At the moment, no one can tell. Nothing is available on that large a scale,’ says Kunttu.

The cost increase for the forest industry would be thousands of millions, though some of that can be offset by the margins of more valuable products. At the same time, however, global competitivity might weaken, with cutbacks on production volumes and jobs in Finland.

One scenario is unfolding in reality

Janni Kunttu is seeing signs that one of the scenarios drafted three years ago is becoming real: Biodiversity and Regulated Economy. This anticipated a threat of war and a stricter regulation of wood products in the EU. On 24 February Russia mounted an attack against Ukraine, and in May the Committee on the Environment, Public Health and Food Safety of the European Parliament voted that forest energy will not be included in the national quota of renewable energy.

’We really didn’t expect that elements of the scenario would become a reality within a couple of years,’ Kunttu says.

In the scenario, the threat of war was assumed to increase because of a rise in consumption and renewable production, weakening the position of countries that produce fossil raw materials.

’We considered that this would increase the risk of conflict globally. Competition over resources and the division into rich and poor countries also has an indirect effect on forest industry,’ Kunttu says.

The scenario anticipates a political debate on wood products.

’We’re beginning to see signs that some wood-based products might not automatically be considered carbon-neutral. I do think that is possible if things continue in the present direction,’ Kunttu says.

Kunttu finds it a good thing that the added value of wood increases. In future, this may also be reflected in stumpage prices.

’It could also be used to finance more support to biodiversity and energy procurement,’ Kunttu explains.

Kunttu is not without hope. In the course of twenty years new energy-saving solutions may be developed and taken into use in new production facilities. There is progress, but there is also time pressure.

’We should start developing new energy solutions without delay, hand in hand with other sectors. We need the kind of technologies that don’t force us to think about the energy issue which came up in all three scenarios,’ Kunttu says.

The FutureForest2040 – Finnish forest industry’s structural changes and market and employment visions for 2040 project has been sponsored by the Metsämiesten Säätiö foundation.

Read more: “Security of supply is at stake unless timber begins to move” – Russia’s attack on Ukraine made tending of young forests key factor in energy supply

FutureForest2040, a joint project by the European Forest Institute and ETLA Economic Research, models some future scenarios on the forest sector up to 2025 and 2040.

The project aims at identifying new forest-based services and products and assessing the impact of the scenarios on employment and the Finnish national economy.

One of the main observations, in addition to the energy issue, is that the need for labour in the forest sector will increase. New types of production will require new facilities, logistics, information technology and BtoB solutions, and existing educational provision is not designed to respond to these. To a great extent, businesses themselves would have to assume the responsibility for education and training.