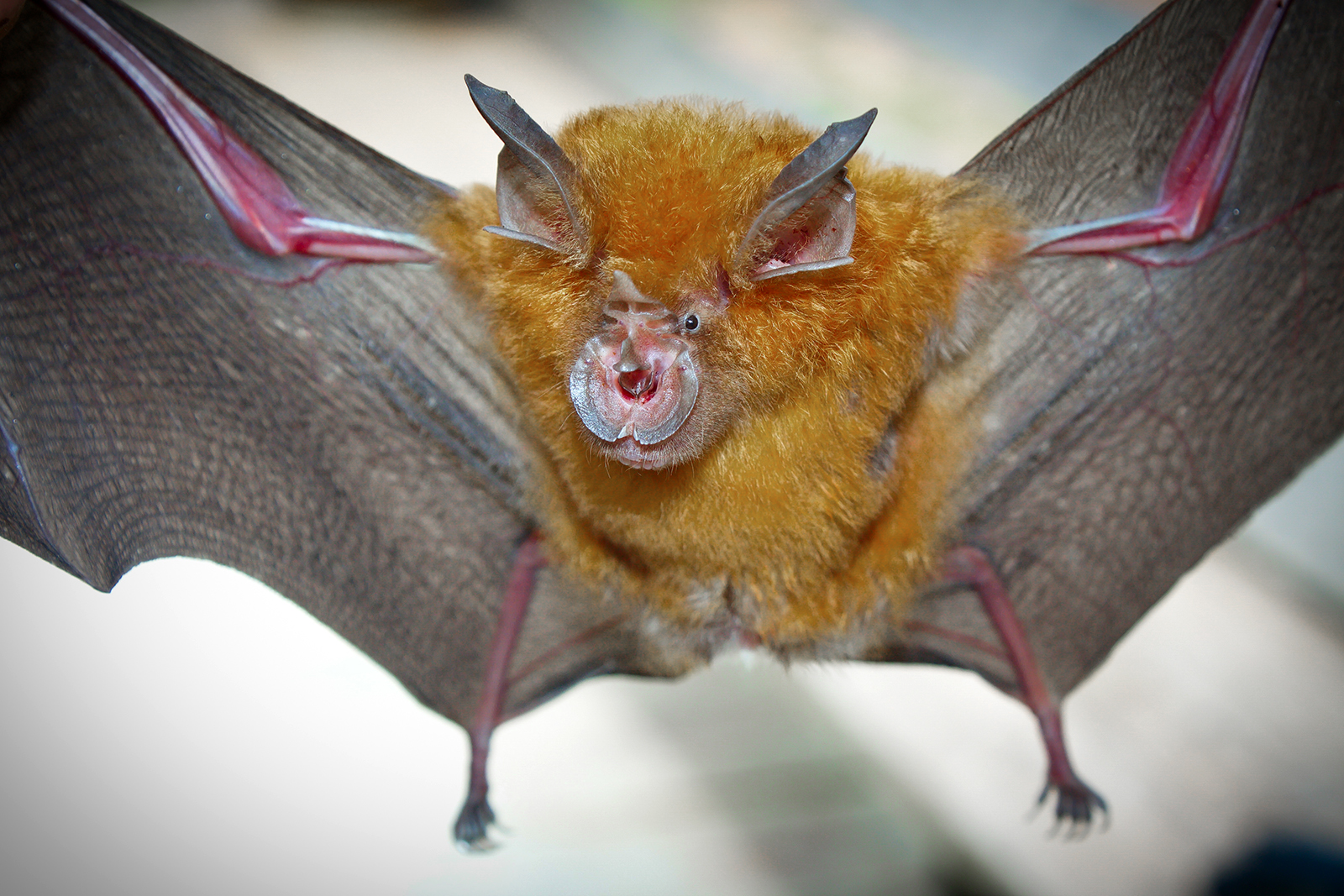 The natural host species of the virus causing the COVID-19 pandemic is still not known. The nearest relative of the SARS-CoV-2 virus has been isolated in the intermediate horseshoe bat (Rhinolophus affinis). Image: Shutterstock

Deforestation may be linked with several diseases that have spread to humans via animals. However, relatives of the SARS-CoV-2 virus are found particularly in bat species living in limestone caves, which does not support the claim that deforestation has contributed to the start of the COVID-19 pandemic.

The theory that deforestation would have caused the COVID-19 pandemic was first brought up by the US journalist David Quammen in an opinion piece in the New York Times. Even before that there had been claims in the social media that disturbance of ecosystems, such as using forests and, in the worst case, deforestation lead to a decline of the host organisms of viruses.

There are plenty of unknown factors in the genesis of the current pandemic. For example, we still have not identified the host species of the virus causing it.

‘Although, just recently coronaviruses have been discovered in Laos that have significant common features with the SARS-CoV-2 virus which caused the pandemic,’ says Professor Emeritus of Forest Zoology, Heikki Henttonen.

Henttonen thinks it is possible that the actual host species will never be found in nature.

‘SARS-CoV-2 may be a cross between different virus species carried by several bat species, with characteristics required for adaptation to humans. It’s possible that a species involved in the trade in wild animals has acted as intermediary,’ says Henttonen.

According to theories in the social media, the number of organisms acting as hosts to viruses is declining due to the loss of biodiversity, and viruses are looking for new hosts because of this. One of these new hosts would be humans, as is said by the French web publication 20 minutes, among others.

The theory is, however, not very tenable, which is also pointed out by 20 minutes. In actual fact, viruses do not ‘look for’ anything.

‘Viruses are continuously attacking humans and all other organisms. Sometimes the result is that the virus adapts to a new organism,’ says Henttonen.

‘Bats in general and bats in Southeast Asia in particular host a wide range of viruses. In the course of evolution these must have leapt into humans several times,’ Henttonen continues.

Human DNA contains plenty of traces of ancient viruses which have attached themselves to the human genome across millennia.

‘In Southeast Asia, 2–3 percent of people living in rural areas are known to have antibodies against current bat viruses,’ says Henttonen.

Host leap is not a piece of cake

For a virus to manage a successful host leap, many things have to be just right. The virus has to undergo precisely the right mutations, but the process is always completely random.

And even if a host individual was to fall ill, it may take really long before the virus begins to spread from one individual to the next. Each new host, too, must be in the right place at the right time.

Transmission occurs more easily if the new host is susceptible to contagion because of weakened immunity, for example.

‘Also, in natural environments we’re normally not faced with just one pathogen. A successful leap may also be due to the combined effect of several pathogens,’ Henttonen says.

Studying pathogen adaptation is not risk-free. An adapted virus may be transmitted to humans in the course of research.

‘There was a Dutch team, for example, who used ferrets to study the adaptation of the influenza virus that caused the Spanish flu. The project had to be stopped because the risk of transmission became too great,’ says Henttonen.

In the USA, President Barack Obama’s government prohibited studies of this type precisely because of this risk.

Information on links between biodiversity and diseases is conflicting

A successful host leap means that the virus is able to exist in the new host species. Still, it may not be capable of much more, such as reproducing itself.

We know that the SARS-CoV-2 virus is capable of leaping from humans to animals and back. If the animal in question is a wild one, the situation is much more dangerous than if it is domesticated.

‘The virus can spread from humans to minks or dogs, among others. It can return to humans from minks, but not from dogs, because it can’t beat dog immunology,’ says Henttonen.

Last summer there was plenty of discussion about the finding that white-tailed deer in the US had a high level of SARS-CoV-2 antibodies. The deer had been infected by humans, yet they were not sick and did not infect humans in return.

‘But this does illustrate the risk that SARS-CoV-2 may begin to spread to new animal species, to mutate in them and then be re-transmitted to humans as a new variant. So even if we manage to control the virus in humans, there might still exist virus incubators out in the wild which could theoretically cause problems down the line,’ says Henttonen.

Biodiversity means plenty of species, but few individuals of one

According to Henttonen, some studies in disease ecology have claimed that the loss of biodiversity leads to pandemics and the spread of diseases from animals to humans. However, there is little evidence that the weakening of forest and other biodiversity is linked to the risk caused specifically by SARS-CoV-2.

In fact, it is suggested by some research articles in publications such as Nature that the link works the opposite way. Science Daily also reported ‘a very weak support, at best’ for the theory.

One of the elements of biodiversity is a large number of species.

‘In the tropics, for example, if the number of species within an area is high, the number of individuals of any given species is often low,’ says Henttonen.

Some among these species may carry viruses dangerous to humans, while others do not. What is essential for the virus is that the number of individuals of a host species is sufficiently high.

‘In this way, a wide range of species may paradoxically hamper the survival of a virus. The viruses carried by bats are very particular about their host,’ says Henttonen.

No statistical proof of cause and effect

Henttonen says that an important cause of the emergence of new diseases is the evident growth of human populations and the resulting poverty. These force people to start moving in search of food, for example.

The same reasons force people to fell forests for more farmland and firewood. In conditions of poverty, wood fires are the only means of cooking food. Over one half of the trees felled globally are used directly as firewood.

‘People also go to the forests to get food, and one source of food are bats. Humans may catch a virus in connection with hunting or cooking,’ says Henttonen. It has been suspected that this is a background factor in the emergence of the ebolavirus.

Another virus incubator is the widespread trade in wild animals in Southeast Asia, where just about any species of animal is sold live on marketplaces. The 2001 SARS-1 epidemic is one that began in just such conditions.

Trade on market places was further increased by the need to kill half of the pigs in China because of the African swine fever. This created a shortage of pork, and that in turn caused a marked increase in the trade in wild animals.

Another telling example is the epidemic in Malaysia in 1999, caused by the Nipah virus. The habitats of fruit bats were deteriorated by forest fellings, and the bats moved closer to humans, to drink the sap of sugar palms.

‘The Nipah virus carried by the bats was transmitted to pigs, and from pigs and their excrement to humans. Huge numbers of pigs had to be killed,’ says Henttonen.

Henttonen says that deforestation may be linked to the emergence of several diseases transmitted from animals to humans. However, relatives of the SARS-CoV-2 virus are found particularly in bat species that live in large communities in limestone caves.

‘This, too, calls into question the claim that deforestation would have contributed to the emergence of the COVID-19 pandemic,’ says Henttonen.

Heikki Henttonen, 71, is Professor Emeritus of Forest Zoology at Natural Resources Institute Finland. His research focuses on mammals and mites and the diseases transmitted by them.

Henttonen has authored or co-authored over 300 articles in English and over 400 in Finnish. For 15 years, he was in charge of EU projects studying the ecology and biology of diseases spread by rodents. He has also participated in related research in Asia.

Above all, Henttonen considers himself a vole researcher, though two thirds of his research concerns the epidemiology of diseases and parasites. He is not a virologist, but primarily an ecologist who studies diseases from the perspective of population ecology.

A friend of classical music, Henttonen is a also keen elk hunter, and he loves dressing meat because ‘it gives you a break from your mundane worries’.