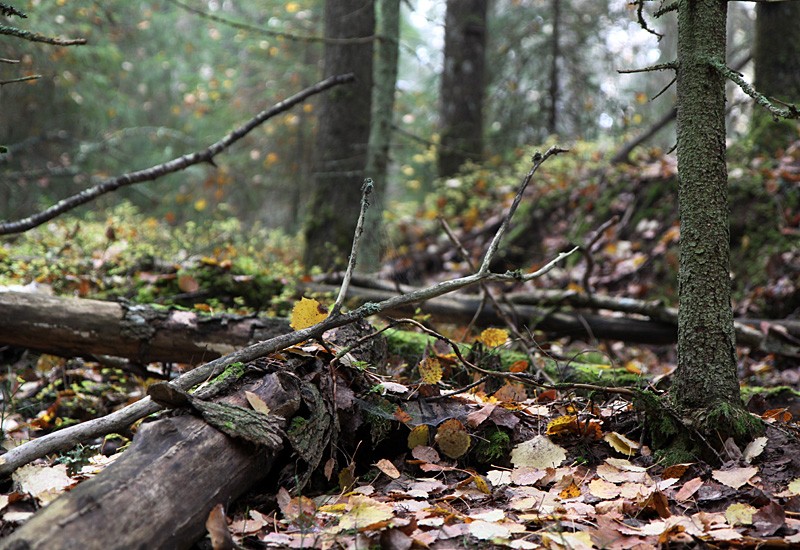 Deadwood was found to be important also as to endangeredness of habitat types.

Three quarters of the forest habitat types in Finland have been classified as endangered. The main cause of this is the use and management of forests. According to researchers, the situation would be even worse without nature management efforts, and they recommend that the efforts are intensified.

The assessment of endangered habitat types in Finland, published in December, contained no great surprises as regards forests. The main causes of threats are the absence of deadwood and large-size legacy trees in forests.

The threats were assessed on the basis of guidelines developed by the International Union for Conservation of Nature, IUCN. Three time-frames were used: from the 1750s to the present, as well as the past and next 50 years.

A great number of changes leading to the endangeredness of forest habitat types have taken place since the 1750s. Changes during the past 50 years have caused the weakening of 41 percent of habitat types.

48 percent of all Finnish habitat types were assessed as being endangered. The greatest threat is faced by traditional agricultural habitat types, and all of them were classified as critically endangered. As regards forests, the only habitats assessed as being critically endangered were relatively dry mineral soil forests as well as both young and old dry mineral soil forests in southern Finland.

Human activity is likely to have changed natural environments even before 1750, as only one third of the forests in southern Finland were in natural state at that point. The researchers consider that the protection of habitat types should focus on types that have recently become endangered or continue to weaken.

The ecological quality of mineral soil forests, for example, was assessed on three parameters: the amount of deadwood and the number of both large legacy trees and deciduous trees. However, as to what would be a sufficient figure for each parameter for a habitat to be considered as causing least concern, no simple or unambiguous answer was available.

The essential factor here is change. ‘Assessments are only based on the change in the quality or area of a habitat type. No actual targets have been defined for the parameters,’ says Jari Kouki, Professor of Forest Ecology at the University of Eastern Finland, who was in charge of the assessment of forest habitat types.

Luckily, no forest habitat types had completely disappeared from Finland. This is not the case in Britain, for example, where it is not even really known what the forests were like when they still existed.

The percentages of endangered habitat types have been calculated out of the number of all habitat types. The figure is not a direct indication of the size of the land area of each habitat type that is endangered. Nor can you use the percentage to conclude practically anything about how endangered an individual forest stand might be.

‘We were not able to calculate the share of the land area of endangered habitat types, because we don’t know the total land area of all individual habitat types,’ says Tytti Kontula, Senior Research Scientist at the Finnish Environment Institute. Kontula was in charge of coordinating the whole assessment project.

What share of this is taken up by forest habitat types is not known.

One’s loss is someone else’s gain

‘If the weakening of a habitat type is due to changes in its ecological quality rather than its land area, the prospects of restoring it may be good,’ says Kouki.

An increased endangeredness may be due to a decrease of the area of the habitat type, or to a decrease of its quality. However, ‘collapse’ does not invariably mean that nature itself disappears, but that the type of habitat will change.

‘If, for example, an inland water habitat type collapses, this won’t mean that the lake or river in question disappears, but that its quality drops below a certain level. And when some habitat types regress, some others may benefit. When, for example, coastal meadows become overgrown, it means that they are invaded by bushes and shrubs,’ says Kontula.

According to Kontula, the weakening of nutrient-poor forest habitat types is linked to an increase in nutrients, which may be due to several reasons, such as nitrogen fallout, fertilization or infrequent forest fires.

Nature management efforts have to be intensified

What should be done when a forest habitat type weakens? ‘It is a fact of life that Finland will continue to use her forests even in the future, and that is not going to stop because of this assessment,’ says Kontula.

The researchers present a long list of recommendations, among which those related to forests are mostly already in use or being considered. According to Kouki, any example of a forest habitat in good condition should be preserved.

Some examples of forest habitats in good condition are located inside protection areas. ‘On the basis of the National Forest Inventories we can estimate that in commercial forests, the total area of such habitats is some 90,000 hectares. If you compare this with, say, the goals of the Metso biodiversity programme, the figure doesn’t seem too far out,’ says Kouki.

In addition to this, all examples of rare habitat types, such as herb-rich forests on the most nutritious soils and those with hardwood trees, should be preserved even if their ecological quality is not very high.

Kouki also recommends preserving those structural features of forests that are ecologically most important, such as old or dead trees, in connection with regeneration fellings. In addition, forest management methods should be diversified.

‘Continuous-cover silviculture may be included as one of the methods, but it is likely that even in even-aged forestry, the mechanisms could be improved to better imitate natural processes,’ Kouki says.

Many forest habitat types, including eskers and herb-rich forests, also require management in order to be preserved, and this is already an active forestry method. According to Kouki, restoring habitats by the controlled use of fires should also be intensified.