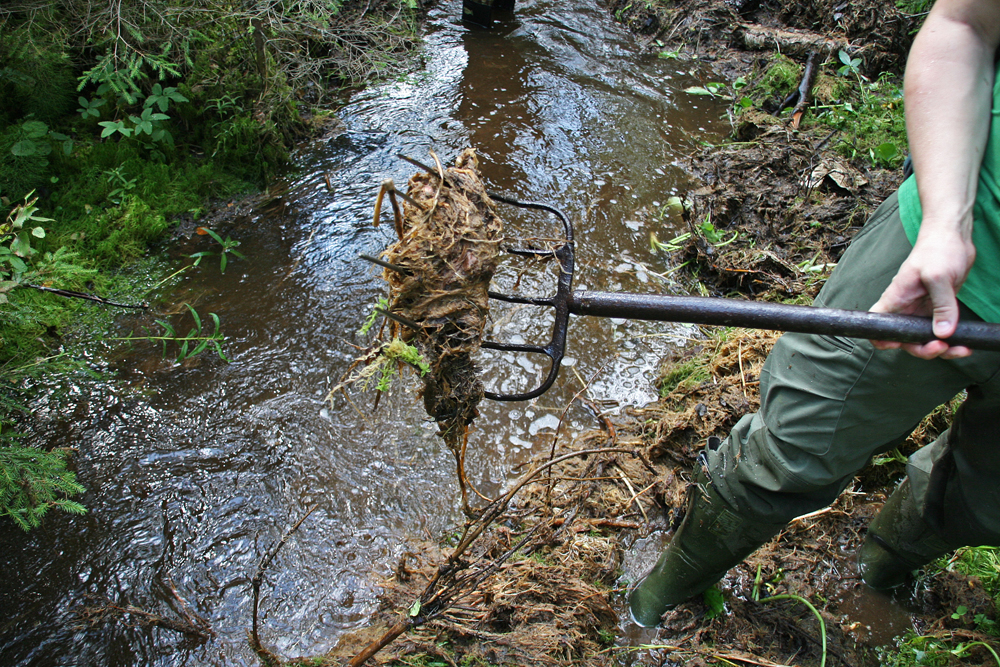 Finland is called the land of a thousand lakes and it definitely also has thousands of small water bodies such as brooks. Still, only a few percent of brooks are in their natural state. Rastipuro is one of the brooks being returned to its original channel, thanks to nature management projects of the state-funded Finnish Forest Centre.

For two weeks, lumberjacks Mikko and Matti Markkanen have swapped their chainsaws for steel shovels and pitchforks. But their most powerful tool is the flowing water.

The brothers are from the Forestry Management Association of Northern Savo. Their task is to guide a forest brook back to its original channel. A few decades ago, the brook was straightened to run along the boundary of three forest holdings. Where the old riverbed is not worth reclaiming, the men bring stones and tree trunks into the brook to change the direction of the flow.

“Flowing water generates a counter current behind the tree trunk, which collects solid matter not found on the bottom of a natural forest brook. At the same time the flow eats at the banks, and little by little the brook begins to meander again along this straight section, too,” says Mr. Lasse Varis, manager of the Rastipuro restoration project, standing up to his calves in the clear water of the brook.

The brook Varis is restoring is called Rastipuro. It is located in the Suonenjoki municipality. The Rastipuro restoration is one of the nature management projects of the state-funded Finnish Forest Centre. The projects always involve the area of several forest estates as joint projects. It is usually the Forest Centre that finds suitable targets, but forest owners can also suggest a project.

The Forest Centre also prepares these nature management projects, but the implementer is sought through a public tendering process. Most projects are carried out by Clean Waters and Otso, a company owned by the Forest Centre offering diverse forestry services.

The project developer applies for financial support envisaged in Kemera – the Act on the Financing of Sustainable Forestry that provides support to forest management in family-owned forests. Since the subsidies granted by virtue of the Act have decreased, also as regards the nature management projects, the applications have to be ranked in order of importance.

According to Laitinen, operations such as prescribed burning, the elimination of harmful species, or the improvement of the multiple use of forests cannot be carried out at all at the moment, even though they are listed in the Act on the Financing of Sustainable Forestry as nature management projects.

In 2016, nature management projects in Finland are funded with EUR 2.4 million, part of which is carried over from last year. Some of the projects, too, are from last year, which will slow down the start of new projects even further.

Like ponds, streams and natural wells, brooks are small water bodies, and according to the Finnish Environment Institute, only a few percent of them are in their natural state. Brooks have served as landmarks and often formed property boundaries. Many have been drained or ditched, and they have suffered in many harvesting operations.

“The greatest sins against brooks were committed in the 1960s and 1970s,” says Varis.

For example, the effect of ditching the Rastipuro brook is also clearly visible in its vicinity. The high banks mainly grow small spruces.

“If the banks were lower, floods would spread a bit wider and would promote the growth of more broadleaved species along the brook. The litterfall from broadleaves would provide better nutrition to microbes than spruce and pine do.”

The restoration of a brook promotes the biodiversity of its entire habitat, and this is given special weight when assessing nature management projects. When Rastipuro is guided back to its original channel and the flow slows down, it will increase forest biodiversity and reduce the solid and nutrient load in lake Iso-Rastijärvi downstream.

“You can create a widespread impact on the environment by restoring a brook. That’s why the conservation of small water bodies has become so important,” says Varis. He compares the restoration with a hill-start: nature is given a push in the right direction.

For example, the restoration of Rastipuro could bring back the brook lamprey (Lampetra planer). The roach (Rutilus rutilus) has already been observed by the workers.