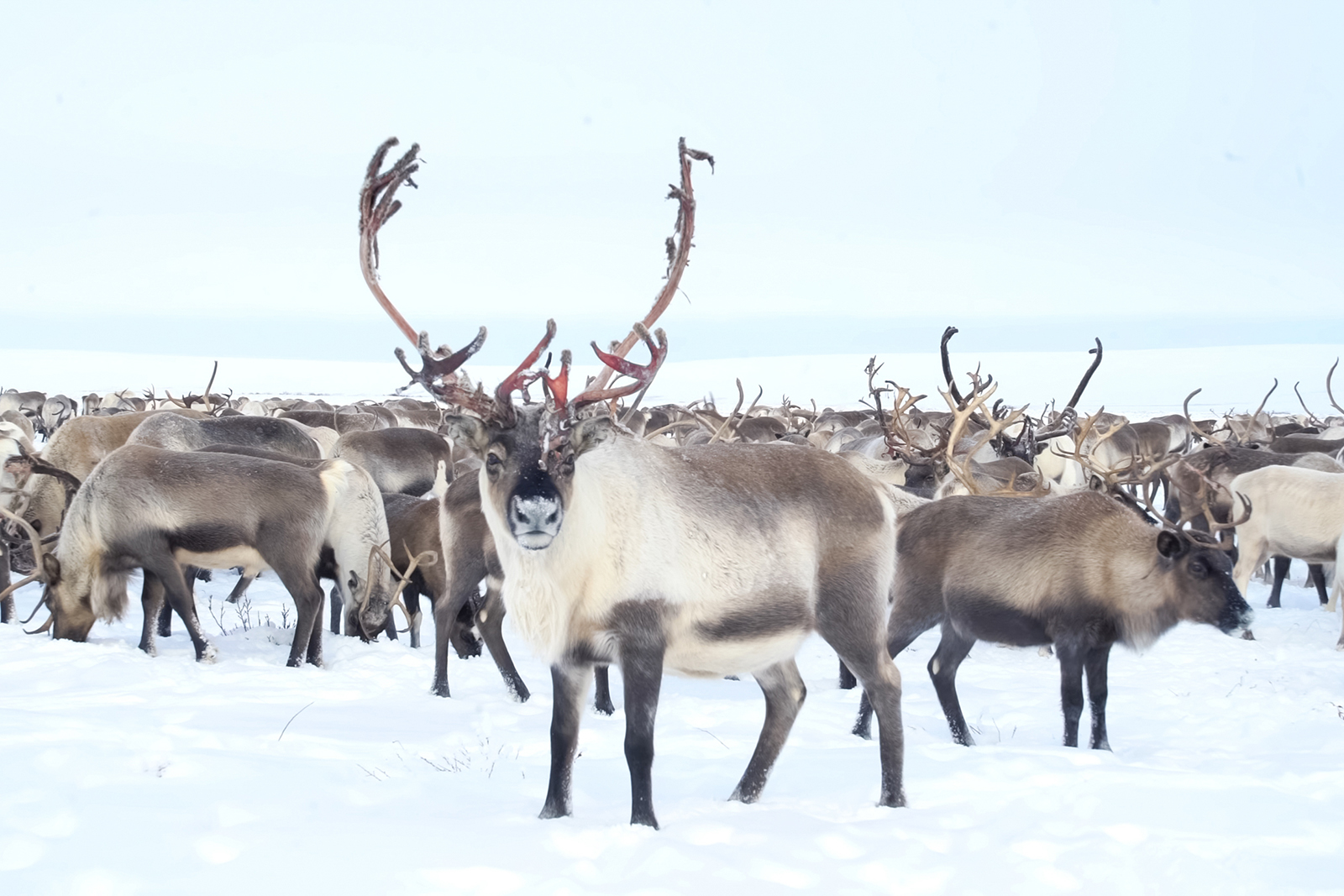 In Finland, reindeer are herded not only in the tundra, but also in forested areas, even far south of the Polar Circle. Photo: Shutterstock

A balance between forest felling, reindeer herding, tourism and other land uses is being sought in the natural resource planning of state-owned lands in the Sámi homeland in Finland. A representative of the Sámi thinks the Natural Resources Plan is a good tool for the work. ‘We’ve found a good spirit of cooperation,’ says Leo Aikio, Vice President of the Sámi Parliament of Finland.

The Sámi homeland in Finland is facing increased pressure related to land use, and this affects the plans of how the area is to be used. Increased independent travel, ore prospecting, construction and production of wind energy all look to get a share, as was said by Tiina Lovisa Solbär, Environmental Secretary (pro tem) of the Finnish Sámi Parliament in an interview with the Finnish News Agency STT in November.

The Sámi homeland in Finland includes the municipalities of Inari, Utsjoki and Enontekiö, as well as the northern parts of Sodankylä. Its size is about 300,000 square kilometres, practically the same as Belgium.

Most of the land owned by the state is under multiple use, being used by tourism, hunters, gatherers and reindeer herding. Eight percent of the state-owned land is under forestry.

The Sámi are the only indigenous people within the European Union. Originally, as well as nowadays also live in Norway, Sweden and Russia, their total number being 75,000–100,000.

The use of state-owned lands in Finland is based on Natural Resource Plans. The plan cooperation group prepares a proposal for the plan. The work involves all important users of state lands in the area covered by the plan and is led by Metsähallitus as the body that manages the state lands. The plan is adopted by the board of Metsähallitus.

The Natural Resource Plan also includes the timber fellings in the plan area. One reason why fellings are problematic for reindeer herding is that trees support species of lichen which reindeer feed on. In Finland, reindeer are herded not only in the tundra, but also in forested areas, even far south of the Polar Circle.

As regards fellings in Sámi homeland, the decisive factor is the reindeer herding cooperative’s opinion on them in its area. Metsähallitus has decided that unless it can agree on fellings with the cooperative, they will be dropped.

Leo Aikio, Vice President of the Sámi Parliament of Finland, says the level of fellings in itself is not necessarily a problem. ‘There will always be fellings, and the most sensible thing would be to plan them so as to cause as few problems as possible. Natural resource planning helps us agree on what to do,’ Aikio says.

The Natural Resources Plan will cover the years 2022–2027. Aikio is confident about the success of the drafting started in the course of this autumn. The Sámi Parliament is the official elected democratic representation of the Sámi in Finland.

Aikio points out that the conditions for carrying on traditional Sámi livelihoods – reindeer herding, fishing, hunting, gathering and Sámi handicraft – must be safeguarded. ‘We’re hoping for a solution that respects Sámi rights. At the same time, we must make sure that nature is conserved as well as possible,’ Aikio continues.

The planning work makes use of the Akwé: Kon method developed to safeguard the rights of indigenous peoples and adopted by the Sámi Parliament in December 2019. The method was agreed in the UN biodiversity convention, and as far as is known, it has not yet been applied anywhere else in the world.

Following the Akwé: Kon guidelines, the Sámi will form an independent opinion on the land use in their homeland. Jyrki Tolonen, chair of the steering group and Regional Director at Metsähallitus, considers this method important, because due to the process, all opinions are known before the actual reconciliation is started. Even if the Sámi might not reach unanimity in their own process, all views presented during it will be known.

Planning covers all types of land use

In addition to fellings by Metsähallitus and reindeer herding, the Natural Resource Plan includes all other uses across the whole area, such as tourism, fishing and gold panning. All important stakeholders participate in the planning, from the reindeer herding cooperatives to tourism operators and local authorities.

The Natural Resource Plan is formulated in collaboration by local businesses, communities and public bodies, but it is based on the principles of the use of state lands, which include the reconciliation of different interests. ‘That’s something we do strive for at Metsähallitus, because it is the only way of achieving a good result,’ says Tolonen.

The co-existence of Finns and Sámi brings special ingredients to the planning in the Sámi homeland. Both ethnic groups have a stake in most uses of the land here, including reindeer herding, and the future of no livelihood can be planned on the terms of one ethnic group alone.

The directions adopted by Metsähallitus for the use of state lands apply equally to everyone. ‘So if we make decisions that affect reindeer herding, for example, those decisions always apply to everyone,’ says Tolonen.

Reconciliation cannot eliminate conflicts of interests. In rural areas even individual families often derive their income from many different sources and may have to find a balance between, for example, reindeer herding and forest management in their own forest holding as well.

‘For many Sámi, the special features of the Sámi culture may be just one aspect of their lives. Still, even if a Sámi person works for the local authority, their right to the Sámi culture must be safeguarded in their everyday life,’ says Tolonen. ‘It may turn out that no one fully approves the final Natural Resource Plan, but it will still be the best compromise achievable.’

But if the felling revenue from the Sámi homeland is negligible and the fellings are detrimental to reindeer herding or other livelihoods, could they not be given up altogether? Tolonen says there are several perspectives to this issue.

Metsähallitus has a statutory obligation to carry on forestry, which provides income for local people as salaries and raw material for the wood processing industry and its employment. State forestry also procures transport and forestry services from local forest management businesses.

‘If state forestry in the region were to stop, there probably would not be these services for family forestry either, or it should relocate,’ Tolonen says.

Fellings are also advantageous to other livelihoods. ‘If young forests weren’t thinned, it would be more difficult for the tourists, for example, to move about in the terrain,’ says Tolonen. Aikio agrees: ‘Sometimes even reindeer herding benefit from fellings,’

Fellings were not the chief topic at the first planning meetings of the Natural Resources Plan; it was tourism. Because of the Covid-19 pandemic, foreign tourists did not come to Lapland in as large quantities as before, but instead, an influx of Finnish tourists came to Lapland, moving deeper and deeper into the national parks. Certain spots and trails sections became congested.

‘There were more encounters between locals and inexperienced hikers,’ says project manager Olli Lipponen in the article by the Finnish News Agency STT. It remains to be seen whether this will be a permanent change.

When tourism expands to areas where reindeer graze, they become useless for herding. ‘In particular, independent travellers often go where they like and do what they like,’ says Aikio.

Tolonen considers that the problems with independent travel are due to lack of communication, above all, and that is also something that must be addressed during the natural resource planning. ‘Independent travel is based on everyman’s rights, and we can’t restrict it. Still, quite often there is a tour operator involved, and that’s who we should try to communicate with,’ Tolonen says.

Dog is wolf to reindeer

Snowmobiles rented by tourists can only be used on marked trails. Some do not observe the rules, and may actually drive straight into a herd of reindeer.

A new and unexpected problem are skiers. ‘These days, reindeer are much more used to snowmobiles than skiers, who make next to no sound on the snow,’ says Aikio.

However, the biggest problem for reindeer are sled dogs. In Inari municipality alone, there are dozens of sledding operators. Using sled dogs is not a traditional way of travelling in forest in Finland, but the Ministry for the Environment has approved dog sledding as part of everyman’s rights.

Aikio says that reindeer think the dogs are wolves. ‘For a reindeer, a team of dogs is like a pack of wolves. It shies away from the tracks left by a team. It’s happened that we’ve gathered together a herd of 500-600 reindeer, and then a team of dogs has run across them, and we’ve only had three reindeer left,’ says Aikio.

Tolonen knows this is a difficult problem. ‘During the natural resource planning we can try to find ways to reach more of the ‘wild’ operators and people using sled dogs,’ Tolonen says.

Homepage of the Sámi Parliament