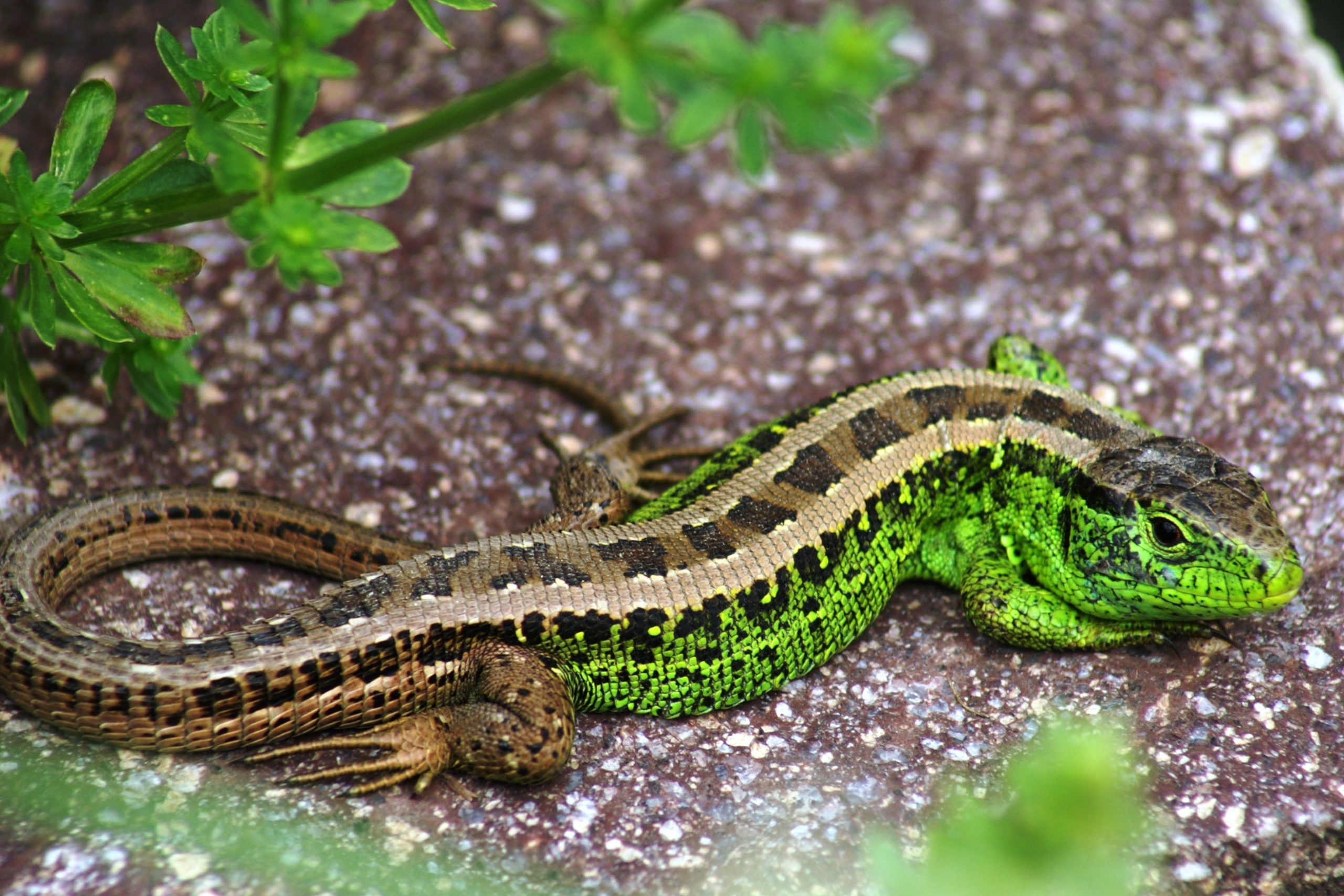 The sand lizard is classified as endangered in Europe. Photo: Wikipedia Commons

1. Habitats of sand lizard are safeguarded

In September 2021, Stora Enso announced that the population of the sand lizard (Lacerta agilis) has successfully been increased in Värmland, Central Sweden. The sand lizard is classified as endangered in Europe.

Adult sand lizards are about 20 centimetres in length and mostly feed on insects. In order to reproduce they need sandy areas that can absorb the heat of the sun.

We expect that these measures will increase the number of sand lizards in the area by 100–200%.

On one of its regeneration felling sites, Stora Enso prepared 30 new sandy patches and cleared existing habitats within an area of 30 hectares. Lizard eggs were also moved to new locations, and completely new sand lizard populations have thus sprung up in the area.

“The results have been great,” said Sven-Åke Berglund of the Värmland County Administrative Board in a media release by Stora Enso.

“We expect that these measures will increase the number of sand lizards in the area by 100–200%.”

The protection project was implemented by Stora Enso together with the County Administrative Board, the Swedish Forest Agency and the Diocese of Karlstad.

2. Volume of mixed conifer cultivation doubled within one year

Metsä Group announced in September that the cultivation of mixed Scots pine and spruce stands had doubled within one year. The number of mixed-stand sites reached one tenth of the sites cultivated by the company.

In mixed cultivation, spruce is planted and Scots pine is sown or planted at the same time on a site. The method is expected to reduce risks due to climate conditions in comparison to homogeneous spruce stands and also to reduce damage by elk. Thanks to spruce, the stands will be sufficiently dense even if elk should destroy some of the pine seedlings.

“Many forest owners only use this method in regeneration on moist heathland sites which are suited to growing both spruce and pine. I do that myself,” said forestry manager Teppo Ojala in a media release by Metsä Group.

The company first offered forest owners the possibility for mixed cultivation in the autumn of 2019. The decision was supported by a study conducted by Natural Resources Institute Finland. The two species grow at an equal rate when using European spruce and Scots pine of cultivated origin.

“In well-tended young stands of spruce and pine, spruce is also capable of developing rapidly in the early stages and won’t be overshadowed by pine in the sapling stage,” said Senior Scientist Saija Huuskonen in a media release by Natural Resources Institute Finland.

In the autumn of 2021, UPM announced that it will adopt continuous-cover forestry in drained and fertile hardwood-spruce swamps. At the same time, it will increase the share of broadleaves by reducing the density at which spruce are planted.

“In future, fellings in such forests on the company holdings will be selection or strip fellings or leave only small openings. In this way, we’ll be able to take better account of species living in such areas,” said Heli Viiri, Development Manager, in a media release by UPM Forest.

UPM revised its guidelines for the tending and thinning of young stands in its own forests a couple of years ago. The goal was to increase the share of broadleaves to a fifth of the timber volume, by decreasing the share of spruce.

“We are preparing for the climate change by increasing broadleaves, because this reduces the risk of forest damage and improves biodiversity,” said Viiri.

We are preparing for the climate change by increasing broadleaves, because this reduces the risk of forest damage and improves biodiversity.

She also pointed out that increasing the share of broadleaves is financially profitable.

“A suitable mix of broadleaves will also improve the growth of conifers,” she said.

UPM believes that it will be able to reconcile species protection, carbon binding and timber procurement. Examples of this are the habitat requirements of the Schistostega pennata moss and the Siberian jay.

The moss is endangered and the Siberian jay is rare in southern Finland. Other methods of nature management in commercial forests include the leaving of retention trees.

Increasing the amount of deadwood, leaving buffer zones along water bodies and providing thickets for game, applying uneven-aged silviculture and favouring forests with a mix of tree species.

“We do need protection as well, and UPM also participates in the METSO Forest Biodiversity Programme for Southern Finland and the HELMI habitats programme in its forests.” said Viiri.

In June, Stora Enso announced it would join the World Wildlife Fund’s new Forests Forward platform. The platform aims at promoting the protection of biodiversity and the restoration of forests.

The WWF programme aims to improve the management of a targeted 150 million hectares of forest globally within this decade.

Stora Enso has collaborated with WWF, including WWF-Russia, for over 20 years. According to a media release by the company, a year ago the area of forests in Russia certified by Stora Enso was over 1.3 million hectares.

UPM harmonizes the protection of habitats of the Siberian jay with timber procurement in Heinävesi, eastern Finland. In June, the company announced that together with biologist Risto Sulkava, it has planned the forest management operations for two forest holdings owned by the company.

The combined area of the holdings is a scant 800 hectares; in other words, nearly eight square kilometres. There are several known habitats of the Siberian jay in the area

The holdings are managed according to certification criteria, and nature management measures are done. According to Juha-Matti Valonen, Environmental Specialist at UPM Forest, the forest cover has been preserved in Heinävesi and old hardwood-spruce swamps have been restored.

“Among other things, this means that spruce in the undergrowth has been spared and the ecotone between mires and heathland forests has been given special treatment,” Valonen said in a media release.

One of the crow family, the Siberian jay is rare in southern Finland. UPM reports having protected almost 300 hectares of the bird’s core habitats According to Sulkava, the aim is to preserve the presence of the Siberian jay.

We’re able to maintain the characteristics important for the Siberian jay and the species of grouse by adopting new forest management methods.

“We’re able to maintain the characteristics important for the Siberian jay and the species of grouse by adopting new forest management methods. At the same time, hardwood-spruce swamps are being restored to their natural condition,” said Sulkava, well known as the former chair of the Finnish Association of Nature Conservation.

Sulkava expressed the hope that through this project it would be possible to show that financial aspects do not prevent the protection of the Siberian jay.

In October, Metsä Group announced it would begin to pay special attention to herb-rich forests located in the forests owned by its owner members.

“As regards the herb-rich forests within the commercial forests of our owner members, we primarily recommend nature management and, for the best sites, voluntary protection,” said Juha Mäntylä, EVP, Wood Supply of Metsäliitto Cooperative in a media release.

The recommendation for nature protection by Metsä Group means that instead of silviculture, management methods favouring biodiversity will be recommended for herb-rich forests.

Mäntylä also stressed that the decision to protect will always be taken by the forest owner.
The mother company of Metsä Group is Metsäliitto Cooperative, with a membership of over 100,000 Finnish forest owners. Together, they own about one half of the private forests in Finland.

The management of herb-rich forests is part of Metsä Group’s programme to promote the ecological sustainability of commercial forests, started in 2020. Its goals are to increase the carbon sinks of forests, safeguard biodiversity and protect water bodies.