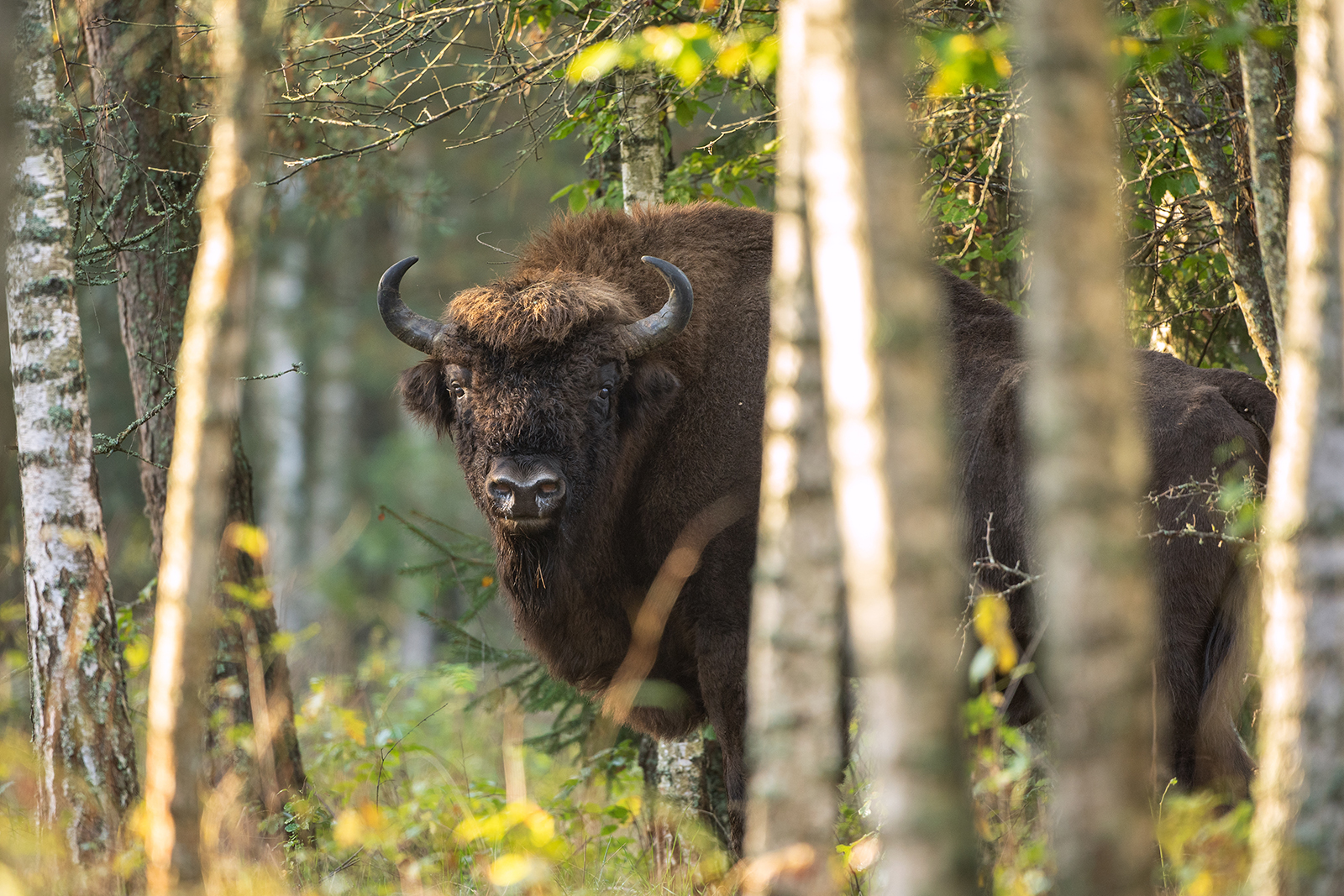 The Białowieża forest is the only habitat of the European bison, also known as wisent. The forest is a UNESCO World Heritage site. Photo: Shutterstock

Poland has announced that it will continue fellings in the Białowieża forest despite the express prohibition by the European Court of Justice in April 2018. The conflict is a good example on the state of Europe’s primary forests, but also about the absence of commensurate data on Europe’s primary forests or their size and future.

According to Poland’s Deputy Climate Minister Edward Siarka, the fellings planned in Białowieża are not contrary to the ECJ ruling, since they do not take place in the area specified in the court ruling or in forests over a hundred years of age. Environmental activists view this as blatant disregard.

This is not a trifling matter, for Poland is threatened by an EUR 100,000 fine for each day of felling.

Originally, the Polish forestry authorities started fellings in the unprotected section of Białowieża in 2016. The argument used was that the forest was threatened by damage by the spruce bark beetle, plus the fact that trees falling down were a danger to visiting tourists.

The EU Commission took Poland to the European Court of Justice, which suspended the fellings in the summer of 2017, until such a time that the Court could issue a decision. Poland stopped the fellings in November that year.

In April 2018, the ECJ decided to prohibit the fellings.

Data on primary forests is fragmented

The Białowieża forest conflict has made the news throughout Europe. It is a good illustration of the conflicting expectations on Europe’s primary forests. In the debate on them there is no agreement on what constitutes a primary forest, as well as on whether they should be protected, how strictly and where.

The most thorough study on Europe’s primary forest is most likely the one by researchers in the German Humboldt University: Where are Europe’s last primary forests?, published by the Diversity and Distributions in 2018.

The article notes that data on primary forests is difficult to access and extremely fragmented. Several countries were very reluctant to inform the researchers about their primary forests, and some provided no data.

The same complaint is made in other studies on the state of primary forests, such as the statistical reports State of Europe’s Forests 2020 (by the EU) and Global Forest Resources Assessment 2020 (by the UN Food and Agriculture Organization).

The Humboldt University team attempted to solve the problem by gathering data from several sources, including the EU and FAO reports mentioned above, and conducting various surveys. The data gathered covered a lengthy period, in some cases back to 2001.

With a broad range of sources and data from different levels, the problem becomes that the data is not necessarily commensurate. The definitions of both forest, primary forest and protection will also inevitably vary.

Study: 2/3 of Europe’s known primary forests are found in Finland

The Humboldt University team found a total of 1.475 million hectares of primary forest in Europe, which corresponds to about half of the area of Belgium and is less than one percent of the forest area of Europe.

According to the researchers, comparisons between countries show that the overwhelming majority, or two thirds, of all primary forests in Europe are found in Finland. Primary forests in Finland cover 986,000 hectares or 2.92 percent of its area. 98.9 percent of these forests are protected.

The second largest total area of primary forests found in the study was in Norway: 106,000 hectares, or 0.3 percent of its area. The share of protected primary forests in Norway is extremely small: 5.6 percent, which is less than anywhere else in Europe.

The researchers note that the area of primary forests is much larger than was thought before, but they are fragmented across all of Europe. Still, their ecological value is significant, as is said by the researchers in the Sustainability Times.

In Eastern Europe and particularly in Ukraine, Bulgaria and Romania there are also many primary forests, a total of 200,000 hectares according to the study. On the other hand, countries such as Latvia, Belarus, Moldova and Ireland provided no data on their primary forests for the study, though it is very likely that such forests exist.

Sweden, Austria, the United Kingdom, Belgium, the Netherlands, Montenegro and Serbia only provided fragmented data for the study, consisting mostly of references to research literature. Even in these countries, and particularly in Sweden, there may be more primary forests.

The definition of primary forest used in the study was a forest that is either completely untouched or untouched by human operations in the last 60 to 80 years.

Statistical report: Half of the untouched forests in Europe are in Sweden

The picture presented in other studies is similar, though only to some extent. The State of Europe’s Forests 2020 published by the EU uses the concept of untouched forests. Statistics show that the highest area of such forests is found in Sweden, 2,240 million hectares, which is half of the total area of these forests in Europe. Bulgaria has reported 704,000 hectares and Georgia 500,000 hectares.

There is, however, variation between countries as to how long a forest should be untouched by forestry or other operations to be defined as untouched. Sweden, for example, reported all forests not operated on within the past 25 years.

The area reported by Sweden is extensive for at least two reasons. The figure includes not only forests, but also other areas with trees, as well as forests within alpine areas dominated by the alpine birch. The latter are more or less completely under protection in Sweden.

Fourteen European countries reported the share of untouched forests to be over one percent of their forest area. They are mostly situated in peripheral and inaccessible areas with extreme climatic conditions and difficult terrains.

The figure reported by Finland to both the EU and the FAO reports was 203,000 hectares of untouched forests, or primary forests. The criterion was that the forest had to be ’sufficiently old’ and no visible traces of forestry operations were allowed.

Highest variation in data on increase of area

The Global Forest Resources Assessment 2020 by FAO comes up to almost the same figure as the EU: 4.2 million hectares and 3 percent of the forest area of the countries included.

According to EU statistics, the area of untouched forests has increased by over 40 percent in the last 30 years. The figure reported by FAO is very much lower, only one percent.

The EU explains the increase in the area of primary forests by several factors, including the general increase in forest area, forest protection measures and the development of protected sites into forest resembling primary forest. Another contributing factor may be that definitions and their interpretations have changed over time.

Nevertheless, the area of primary forests is small. This is due to many things, one of which is the 7,000-year history of agriculture, as well as the use of wood and building in general.

The idea of sustainable forestry only won ground in Europe in the 19th century, and by that time a great deal of European forests had been lost. Moreover, sustainability at that time was only taken to mean sustainable timber production.

The requirement for ecological and social sustainability only began to be observed at the end of the 20th century. The protection of European primary forests started during that same century.

’Near-primary forests must also be conserved’

The remaining primary forests are ones that people have not needed for building or agriculture or which are too complicated to harvest. They are generally found in peripheral and inaccessible areas, such as mountains. One characteristic of primary forests is a high volume of deadwood at different stages.

Primary forests are in danger of being felled. ’Large areas of primary forest are being felled in many mountainous areas, in Romania, Slovakia and some Balkan countries, for example,’ says Miroslav Svoboda from the research team to the Sustainability Times.

Primary forests are important because they are the habitat of many threatened species. They are also needed because they provide the only chance for people to understand the functioning of an untouched forest ecosystem.

This information is needed when restoring forests to their natural state. In some parts of Europe, primary forests have disappeared so completely that we do not even know what they were like.

Restoring commercial forest back to primary forest may take decades. The process may be speeded up to some extent by such means as killing off trees and allowing them to decay in the forest.

The Humboldt University team do say that changes in agriculture and forestry are taking a direction that may make it easier to restore commercial forests to primary forests. One favourable factor is the structural ageing of forests, which is frequent in Europe.

The researchers therefore suggest that, in addition to primary forests, European countries should also protect forests approaching the state of primary forests, in order to ensure that they do reach that state.

Researchers at FAO and Natural Resources Institute Finland were interviewed for this article.

Where are Europe’s last primary forests? Diversity and Distributions, 2018

Sustainability Times: There are more primary forests in Europe than we thought

The Białowieża forest comprises 1,500 square kilometres, 900 of which are situated in Poland, the rest in Belarus. The forest is a UNESCO World Heritage site and among other things, is the only habitat of the European bison, also known as wisent.

One of the reasons given by the Polish government for starting fellings in the area was the threat of damage by the spruce bark beetle, which is a well-known phenomenon in Central Europe. Rampaging in the Czech Republic, Germany and Austria, the beetle has destroyed so many trees that the market of sawn timber, for example, will be badly upset in large parts of Europe for several years.

If the beetle damage reaches sufficient severity, it may also destroy living spruces over large areas. The only means of stopping this is to remove from the affected area all infested trees and enough healthy ones to stop the beetle from spreading.

Those who oppose the fellings say that the forest will survive this natural disaster. Forestry authorities, however, say that this would be true if Białowieża was surrounded by sufficiently large areas of untouched forest – and this is not the case.

Some researchers believe that the bark beetle may destroy the Białowieża spruce stands completely. Others say that this will not be a problem, since the forest will regenerate and has survived several earlier bark beetle infestations.

Absurd idea to include “NEAR primary forests” or “NEAR old forests” in preservation attempts, the more so as there is no agreed-upon definition for either of these concepts. Absurdity added to absurdity.