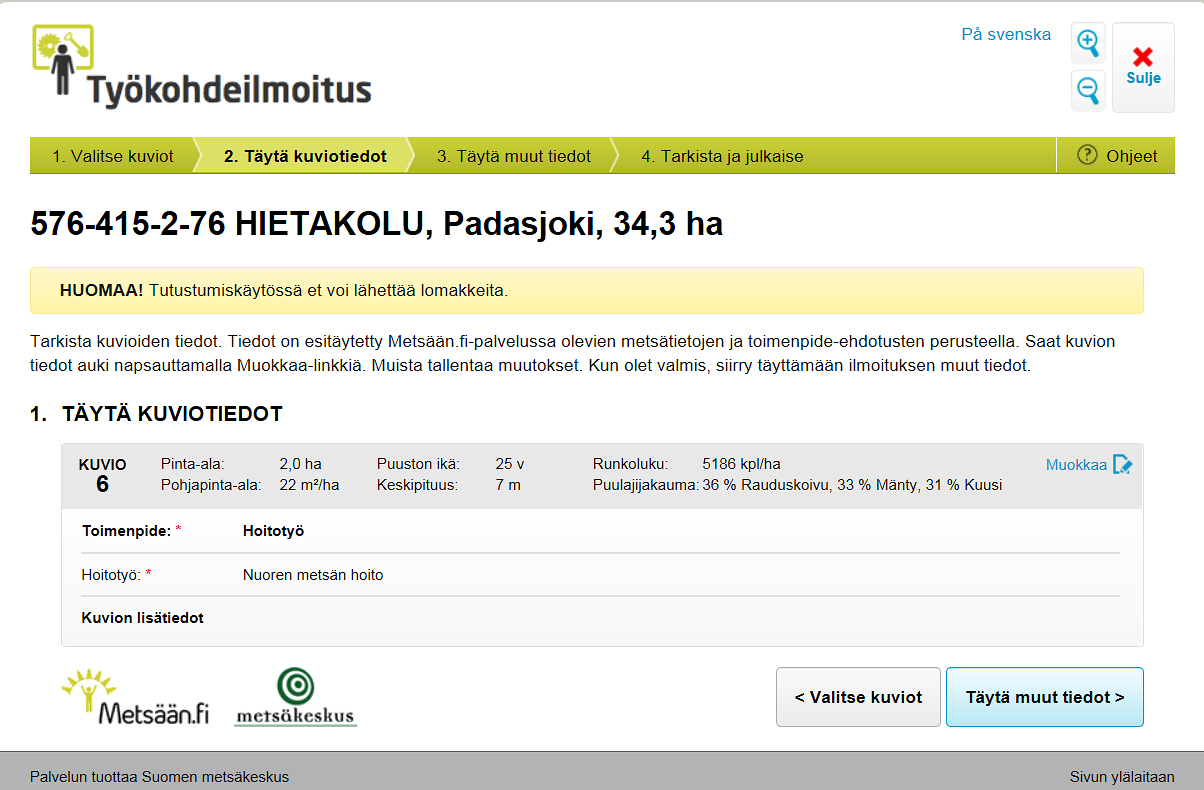 Example of a view in Metsaan.fi.

Owners of 127,000 forest holdings have given forest organisations and actors access to data about their forest holdings. The number exceeds the goals.

”With the Metsään.fi web service, we have so far achieved two goals, while the third one needs to be worked on,” says Mr. Veikko Iittainen, Customer Relations Manager at the Finnish Forest Centre.

One of the goals met is that the owners of 127,000 forest holdings have agreed to give forest operatives – companies, forest managements associations, private companies offering forestry services – access to data related to their forest properties.

There are about 375,000 separate forest holdings owned by private individuals in Finland. The number of forest owners, however, is about 632,000, as many holdings have several owners.

Making forest holding data available to forest operators means that they can look it up or even download it to their own IT systems. Iittainen says that about 85 percent have given permission for the downloading of data and 15 percent only allow it to be viewed.

Another success is that 230 forest operatives have joined the service. ”I’d estimate it’s about 90 percent of the total volume. A few fairly large sawmills and companies offering forestry services are missing,” Iittainen says.

By now, the number of forest professionals using the Metsään.fi service in their work is about 1,000.

When the forest owners give forest operatives access to the forest holding data, they will all see the same information about it. “This is a unique service even in terms of the whole world,” Iittainen says.

The fact that forest holding data is shared and so many forest operatives have joined the service means that the exchange of contact requests regarding forestry work and fellings within the system is already working well.

If a forest owner does not want to give forest operators access to all data on the holding, he or she can just request contacts concerning a single job, such as a first thinning.

Easy to keep the data current

Making forest holding data available to forest operatives does not cost anything. However, using the Metsään.fi service costs 60 euros per year. As you can currently get three years of use for the price of two, most have chosen a three-year deal. The sum is tax deductible for forest owners.

For the 60 euros a year, the forest owner gets a web-based plan for his forest holding, which is easy to keep updated. The cost is small compared to the value of an average forest holding of 30 hectares. You pay the same amount each year for your banking services.

So far, only 5,500 forest owners have bought the service. “This is fewer than the goal set,” Iittainen says.

”We have made efforts to identify the problem. Maybe people have an up-to-date printed forest plan and Metsään.fi does not give them enough extra on top of what they already have. Also, to log on, you need to confirm your identity in the same way as with web banking, and this can feel cumbersome,” Iittainen ponders.

The Metsään.fi service was launched one section at a time. It now covers up-to-date forest information over two thirds of the forest areas in private ownership, or some 9.4 million hectares. Iittainen believes that the forest operatives’ presence in the service will encourage forest owners to join in and increases the benefits that forest owners feel they may derive from it.

Feedback has been positive. Both forest owners and forest professionals feel the Metsään.fi service is easy to use.

The service will be developed further on the basis of feedback, as far as resources allow. To begin with, the maps provided in the service were felt to be too small, and they have been enlarged.

New features will next be launched in November. More environmental information will be included, for example.

In November, the Metsään.fi service will be ”complete” according to what was originally planned. However, the development will continue.