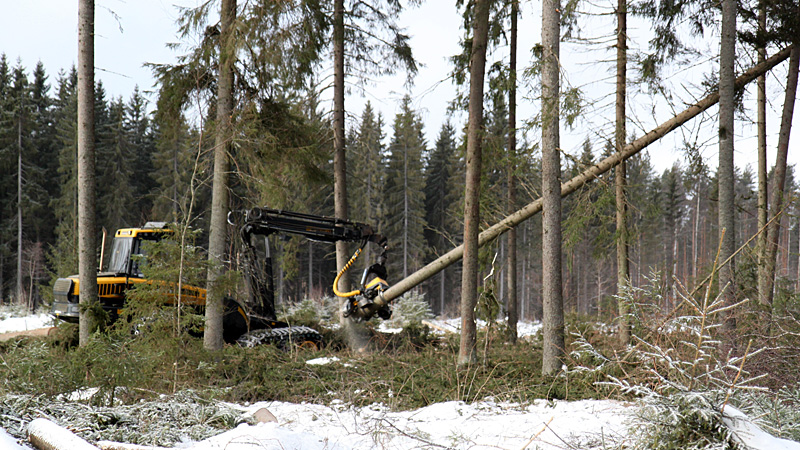 According to Mr. Nils Torvalds, Europeans do not generally understand the benefits of forests in bioenergy production.

In Finland all restrictions to forestry are not included in statistics. In particular, land use planning may increase areas of restricted forestry by several percentage points.

As an example, in certain areas in southern Finland the percentage of strictly protected forest and scrub land is around two. Including the effects of land use planning causes only a slight increase to this figure, whereas there is a clear increase of areas where forestry is restricted.

On the basis of figures from 2012, actual forest protection sets restrictions on 0.7 percent of forest and scrub land in southern Finland, but including the effect of land use planning increases the figure to 5.5 percent.

In addition to this, the restrictions are targeted at the forestry operation that is financially the most valuable: regeneration fellings producing stout timber. Sales of stout timber bring in 70 percent of the forest owners’ timber sales revenue in Finland.

Taking the town of Hyvinkää as an example shows that the restrictions due to land use planning increase the share of strict protection by one percentage point, to 6.4 percent. Their effect on the restricted use of forest and scrub land is an increase of 17 percentage points.

Due to these restrictions, the largest sustainable logging volumes, as well as the timber sales revenues, decrease by seven percent in Hyvinkää.

“It seems that the pressure caused by land use planning on forestry has increased during the last few years, especially in southern Finland,” says Ms. Tuula Packalen, Professor from the Finnish Forest Research Institute. She has led the preparation of a report exploring the effects of land use planning on forestry in certain areas in southern Finland.

There is also variation in how the land use plans are interpreted. “The restriction may mean a ban on clearcuttings or a demand to keep the area forested, for example. Such restrictions may decrease the timber sales revenue by two percent,” says Packalen.

Effects on forestry are seldom evaluated

Although the use of forests is important for both the residents and the business life of a municipality, the effects of land use planning on forestry or wood procurement are seldom evaluated. Planning most often affects forestry near more densely populated areas, or in the vicinity of areas important for recreation or forest ecology. The effects are difficult to evaluate, because the interpretations of what the land use plan actually demands vary so much from one municipality to the next.

As a rule, loggings in areas where forestry use is restricted require a special permit. The conditions set in such permits may decrease the logging amounts allowable by as much as six percent.

The permits are also subject to a fee. “The price of a permit also varies between municipalities. It may equal the sales revenue from the thinning of two hectares, for example. In addition to this, the forest owner usually needs assistance in applying for the permit, which increases the costs further,” says Mr. Esko Laitinen, Director at the Union of Forest Owners in Southern Finland.

“Getting the permit takes time, which makes the planning of timber deals more difficult. It also transfers some of the forest owner’s decision-making power to the local authority, as well as to his neighbours, who must be heard regarding the applications,” says Laitinen.

All this often means that the forest owner abandons the plan to thin, which decreases the economic and recreational value of the forest. If the plan requirements are interpreted more strictly or if thinnings are abandoned due to the complexities of getting a permit, the timber sales revenue may decrease by as much as a quarter in our sample locality Hyvinkää.

There have been efforts to unify the way in which requirements are presented in the land use plans during the last few years. The interpretations may, however, differ even within the same municipality. “This means that forest owners are not treated equally before the law,” says Packalen.

Forest owners are not always allowed to participate in the preparation of land use plans. There are cases in northern Finland, for example, where forest owners have been disqualified from the planning process – despite the fact, or perhaps because, it is their own property that is concerned.

In principle, landowners should receive compensation for the losses caused by land use planning, but in practice the plans usually include no evaluation of these losses. The prevalent interpretation is that compensations are not obligatory because the lands still stay in forestry use, although the losses may be significant.

The areas protected through land use planning are not included in official forest protection figures. Packalen considers this to be a problem. When information is not available on all restrictions, the logging potential may be overestimated, and the information would also be important for the planning of other forestry activities.

The report was prepared following an initiative of the Forest Owners’ Union in Southern Finland, and it was financed by the Finnish Forest Foundation.