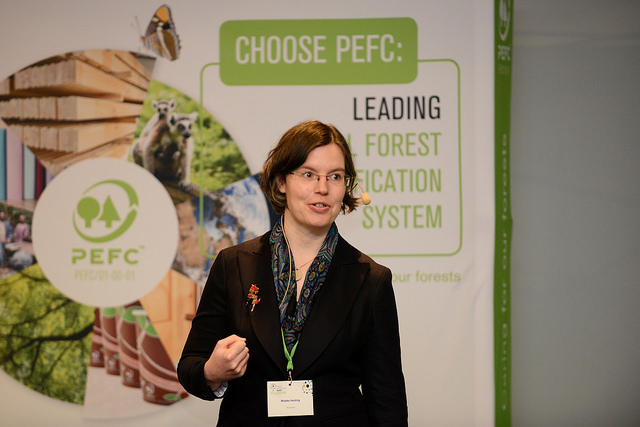 Wiebke Herding, Managing Director aof the Dutch ON:Subject company asked PEFC, whether it would be the first one to modernize certification system, or would it just stand by and watch others do the job. Photo: Tero Pajukallio / Diaidea

New technologies and big data will revolutionize forest certification – if we so decide. In the future, the openness of data is not just an extra, but a necessity and a condition for gaining general acceptance for forestry activities.

Johann Gutenberg had no idea what the art of printing would lead to, and neither did James Watt know he had invented something essential for global commerce. Those who invented the Internet were equally unable to predict the significance of their innovation.

But the Internet is not the only technology changing the world. Others include mobile technology, big data, satellite technology and photonics. All of these can be advantageous to forestry, too.

They will bring great changes in forest certification, at least if we believe Wiebke Herding, Managing Director of the Dutch company ON:Subject. Herding has been involved with different certification standards since 2007.

”By chance, the use of the Internet started to spread at about the same time as new certification standards, designed to help the consumers, were adopted. The Internet was not discussed that much, while the standards certainly were,” said Herding, speaking during the PEFC Week in Helsinki last week.

In itself, a label is not that informative

The aim of forest certification is to inform the consumer reliably that the wood material used in a product originates in sustainably managed forests. The reliability is based on three things: a public standard that includes the requirement for sustainable forestry, the verification of the chain of custody from wood material to finished product, and finally, the label on the product or its package, telling the consumer that the product is certified.

The activity is monitored by auditing companies, which are independent from the production chain. In the case of PEFC certification, the independency of the auditor is controlled by public authorities.

According to Herding, new technology enables all this to be done in another way, with significantly lower expenses. The key to this is data, which is much more abundant and better available than up to now.

A forest owner, for example, can even now gather many kinds of data from the forest: energy flows, movement of water, type of soil, amount and quality of production, satellite data. ”Another essential thing is that the forest owner has control over the data and can decide how and where it is used,” said Herding.

On the other hand, trust in certification is most of all based on information. But is it possible for the consumer to access information connected to the product? ”No,” said Herding, ”all they get to see is the label.”

But why could we not replace the label by an RFID tag, for example, which would contain the information, or by a QR code that would allow you to access the information? This would be fully possible even today.

This would be an open and inherently reliable system, because it would be monitored by the consumers, by the community that views and uses the information at all stages of the production chain and, ultimately, by the body that will verify the quality of the information whenever needed – in other words, what is now called the auditor.

Herding considers that in practice, this system would be more reliable than what we have now, but also decisively cheaper and easy to report on and verify. She also reports that on being inquired about this, the certification community has supported the idea.

A great problem in certification are the many and partly overlapping standards and certificates. Herding’s proposal would also solve this, at least as regards the forest owner. For the forest owner, it would be easy to compile a data set to meet the requirements of any standard from just one data system.

At best, this could lead to a better world for the consumer as well, if the standards began to converge. Everyone could search for precisely the information they needed through the channel provided by the product.

The strength of Finns lies in collecting data. According to Herding, big data could be collected by several technologies, of which she mentioned mobile phones, remote sensing and satellites as examples.

In Finland, data is already being collected by laser scanning. An emerging method is making use of the harvesters.
The volume of data to be gathered is enormous. There are even plans to gather data on microclimates.

Heikki Pajuoja, Managing Director of the Finnish R&D company Metsäteho, stressed the openness of information. ”Data and information should be available as widely as possible to all business operators. This is the only way for us to ensure general acceptance for our operations,” said Pajuoja.

Pajuoja pointed out that we already have access to real-time data from our forests. ”We have the tools and the scientific base. The question is, do we want to use them,” he asked.

”We would be better aware of what the forest would look like if we did this or that. The strategy would coincide with the result in advance of actual fact,” said Pajuoja.

PEFC General Assembly in Finland – a first for a Nordic country