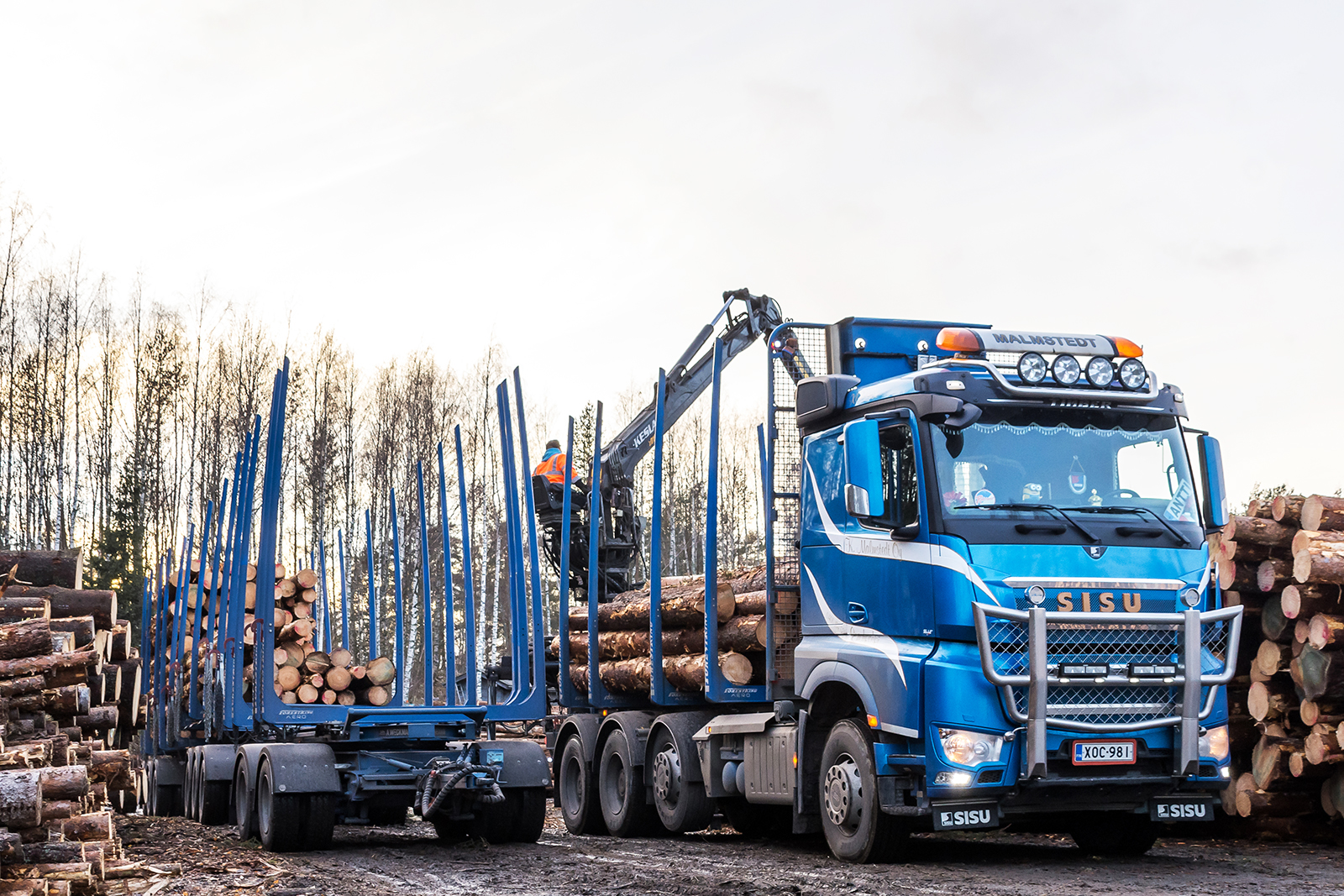 Using renewable diesel fuel may cut down on emissions by up to 90 percent. Using electricity could also improve energy efficiency in timber harvesting and reduce carbon dioxide emissions.

The greatest emissions from managing commercial forests are created during harvesting and long-distance transport, in other words, transporting timber from intermediate storages in the forest to industrial facilities. These emissions may be reduced by using more efficient technology and low-emission fuels and by resorting to transport modes that save he most energy, such as trains and log driving down waterways.

The significance of emissions into the atmosphere due to forestry may be evaluated from several perspectives. In Finland, the Finnish Sawmills Association has estimated that half of the carbon footprint of a sawmill, for example, is due to harvesting; that is, felling the trees, cutting them to lengths, de-branching and transport to an intermediate storage next to a logging road. 16 percent is due to the long-distance transport and only 34 percent to activities at the sawmill.

On the other hand, the products of a sawmill in themselves are extremely climate-friendly. Compared to emissions from the production, sawmill products have sequestered 20 times as much carbon.

We listed four ways used to reduce the environmental and climate burden from forestry.

In timber harvesting, the trees are most frequently felled, de-branched and cut with a harvester. In itself it is highly energy-efficient, if only because it can do the work of 20 loggers.

Still, the energy efficiency of harvesters is being improved. JM Forest, operating in Southern Ostrobothnia, is the first company in Finland to use a harvester that runs on both diesel and electricity. This gives extra power when required.

The diesel engine of the Logset hybrid harvester can run on an even load throughout, which reduces energy consumption. Some of the energy provided by the diesel engine is used to charge the harvester’s high-capacity super capacitor, and the additional power needed momentarily for the electric motor is derived by de-charging the capacitor.

According to Logset’s web pages, the diesel engine of the hybrid harvester produces a steady output of 300 horse powers. Thanks to the electric motor, a momentary extra output of up to 210 horse powers is possible.

Logset estimates that this could reduce carbon dioxide emissions by 15–30  percent and fuel consumption by 25 percent. In addition, there would be a 5-percent reduction in noise level. The operating costs of the harvester would decrease by 10–30 percent, which could result in a rise in productivity of up to 27 percent.

A study by the R&D company Metsäteho is comparing the fuel consumption of Logset’s hybrid harvester and a conventional harvester using diesel fuel. Pekka Saloranta, Manager of Product Marketing and Testing at Logset says that the company’s own estimate used a more efficient hybrid system than the one used by Metsäteho, which may have an effect on the results.

The study was started last year, but has been slowed down by the Covid 19 pandemic.

For some time, large lorries have travelled on Finnish roads, thanks to special permits from the Finnish Transport and Communications Agency Traficom. The normal maximum weight of a combination of vehicles is 76 metric tons, while permits for this experiment have included combinations of up to 104 tons.

Vehicles this heavy cannot, however, go just anywhere. When carrying a load they most follow prescribed routes.

Large lorries are desirable because they help to bring down transport costs. Fuel consumption per unit of load and each kilometre driven goes down, which also decreases harmful emissions. Another thing is that there will be fewer vehicles on the roads, since the same amount of goods can be transported by fewer lorries.

Stora Enso and the University of Eastern Finland have recently compared the fuel consumption of vehicles weighing 92 and 76 metric tons. Both combinations had the same tractor vehicle, a 625-hp Sisu Polar.

The fuel consumption was monitored for almost 18 months up to November 2020. During that period, the 92-ton vehicle delivered almost one thousand timber loads.

It also delivered the goods in another way.

‘Per ton carried and kilometre driven, the 92-ton vehicle used more than ten percent less fuel than the 76-ton one. This is significant, because fuel takes up about 30 percent of the cost of timber transport,’ says Kalle Kärhä, Operations Manager at Stora Enso.

Kärhä does point out that fuel consumption is affected by many other factors.’In particular, the driver’s personal style has a great impact. That’s why it’s quite common to train drivers to develop an appropriate driving style.’

Stora Enso works actively to determine the energy efficiency of timber transport. The next study to be completed by the University of Eastern Finland examines the energy consumption of a hybrid lorry running on electricity and diesel fuel.

Stora Enso is also testing an autonomous lorry at its Uimaharju facility. The effect of autonomous operation on fuel consumption is one of the aspects studied, but results will only be available later.

Major lorry manufacturers are all close to launching vehicles that are either fully electric or use both electricity and diesel fuel. At first, these vehicles are envisaged for light distribution operations in cities.

They will be designed so as to be re-charged during the driver’s statutory 45-minute break. Distribution vehicles already on the market can run up to 250 kilometres on a single charge.

Volvo has scheduled the launch of its first electric lorries on the European market for later this year. Heavy lorries with a total weight of up to 44 metric tons are being tested, as was reported by the Metsätrans magazine in November 2020. The vehicles brought on to the market this year can run up to 300 kilometres on a single charge.

Volvo promises that electric vehicles for heavy long-distance transport will be launched within this decade. They will run on electricity and hydrogen.

Metsähallitus, which manages the state-owned forests in Finland, has started to use renewable diesel fuel in its timber transport. Renewable diesel is produced of waste liquids from pulp production or foodstuffs leftovers, for example.

So far, renewable diesel is more expensive than the fossil-based fuel, but with growing demand the price difference is expected to decrease. QTeam Systems Oy, which manages the timber transport for Metsähallitus, believes that the use of renewable diesel will increase.

Kääriäinen thinks that the greatest obstacle for the use of renewable fuels is the slow expansion of the refuelling network. Pasi Korhonen, Managing Director of QTeam Systems, believes that the network will develop.

Metsähallitus is also planning to use gas in its transport vehicles. This, however, will not be suitable for heavier timber lorries with a maximum weight of 76 tons.

Metsähallitus will start developing a gas-driven lorry once it has found a suitable partner. The vehicle will not be in operation before winter 2022 at the earliest.

Addition, 11.6.2021: Sentence “renewable diesel is produced of waste liquids from pulp production or foodstuffs leftovers, for example” was added.