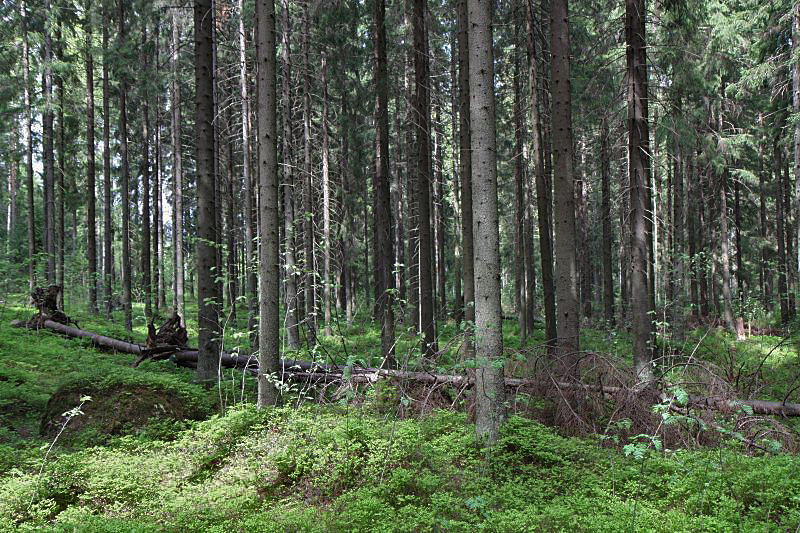 Amount of dead and decaying wood has increased in Finnish forest for a long time, partly because nowadays nobody any more uses it as fuelwood. Photo: Krista Kimmo

“Changes in the endangeredness index of forests show that the extensive measures to improve forest biodiversity in connection with forestry activities really do affect the status of species,” says a researcher.

Ms. Aino Juslén, researcher at Luomus, reported on the study at a seminar organised last week by the Metso biodiversity action programme in Helsinki, Finland. A team led by Juslén assessed the development of the endangeredness of species in several ecosystems on the basis of the red lists on Finnish species published in 2000 and 2010.

Although the latest red list was completed as long as six years ago, the assessment of individual habitats could only be carried out now, owing to a lack of basic information.

The work to prepare the next red list was started recently. The list will be completed in 2019, and the aim is to provide the information on individual habitats at the same time.

“Protection measures have had an impact”

Each species was assessed in its principal habitat. Because many species may live in several habitats, this method gives only a partial, yet indicative, picture, said Juslén.

Juslén stressed that in the debate on endangeredness, researchers and others should look not only at the numbers of endangered species, but also at their share of the number of species studied.

Looking at the share of endangered species in different habitats in Finland, it is smallest in forests, mires and waterways. On the other hand, looking at the absolute number of endangered species, it is highest in forests, because the overall number of forest species is so large. This, again, is because almost all of the country is covered by forests.

“In the debate, you should look at the share of endangered species, too.”

Endangeredness as well as its rate of increase was highest in alpine habitats. Other habitats with a higher-than-average increase were mires and littoral zones.

However, Juslén warns against over-interpretation: “While this is an important indicator, it is not the only one. To gain a correct picture, you need to look at things from different angles.”.

“Changes in the endangeredness index of forests show that the extensive measures to improve forest biodiversity in connection with forestry activities really do affect the status of species,” said Juslén.

Bugs and beetles have benefited from controlled burning and the practice of leaving large trees standing in connection with regeneration fellings. After their death, these retention trees increase the amount of decayed wood in forests.

The amount of decayed wood will continue to increase, because the methods of increasing will continue to be used, and new methods are also being introduced. For example, since October 2016 Metsä Forest company has offered forest owners the possibility to leave retention trees in connection with thinnings, too. And, since October 2016, Finnish forest owners’ unions MTK and SLC together with Finnish energy industry recommend the forest owners to create decaying wood and nesting trees for birds under the power lines on their lands.

Controlled burning, however, is decreasing in Finland. This is an issue that has been discussed at the biodiversity discussions led by Minister Kimmo Tiilikainen.

One of the tools in the Metso programme is the provisional protection of forest areas. The original idea was to protect short-lived habitats, such as wildfire sites, where the economic value of timber is practically zero.

Mr. Juha Siitonen, researcher at the Natural Resources Institute Finland, said that provisional protection may also be a good method to safeguard species living on decayed wood, such as polypores, as long as certain other conditions are met.

Research of Juslén’s group: Application of the Red List Index as an indicator of habitat change