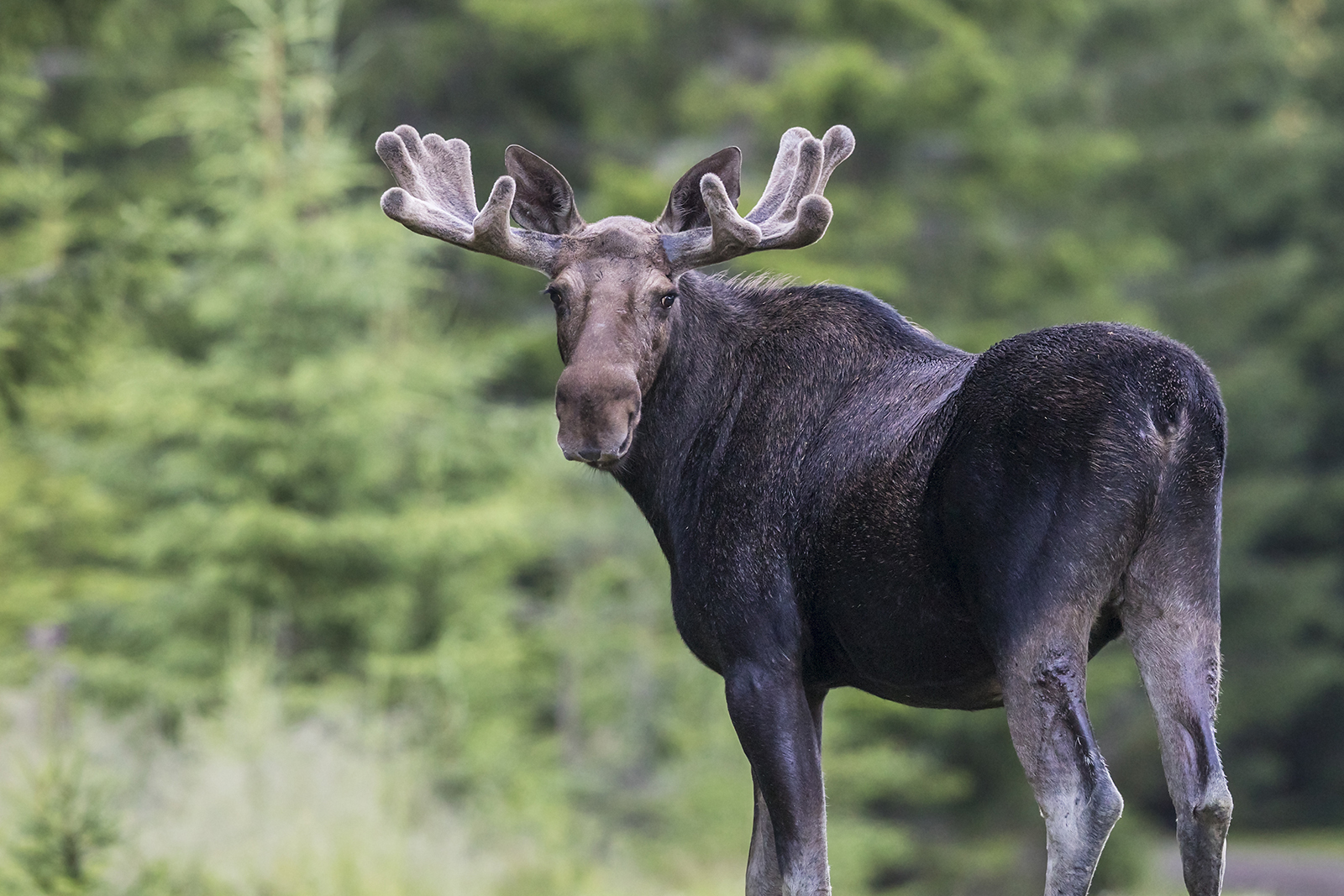 In Finland, tens of thousands of elks are hunted every autumn. It is not uncommon for a Finnish hunter to also be forest owner, forester – or environmental expert, such as Juha-Matti Valonen.

A bright and cheery twitter from the top of a spruce makes both Juha-Matti Valonen and Perttu Valonen turn their heads simultaneously towards the sound.

“A crested tit,” both note, and suddenly, a tiny bird of a species not that common in Finland brushes past Juha-Matti’s shoulder.

Father and son are surveying areas which elk are known to use. Here in Harviala, Southern Finland, the Finnish forest industry company UPM has organized an elk hunt for decades, and the long tradition will continue this year. More than twenty elks are usually felled during the weekend.

Juha-Matti Valonen manages the practical organization of the Harviala elk hunt. For over ten years, Valonen has worked as an environmental expert for UPM Forest, and before that he was active in various wood procurement and forestry tasks.

Perttu Valonen, who graduated from the upper secondary school last spring, plans to study the field of natural resources and the environment, and is one of the experienced hunters in the district who help to organize the hunt.

The decades-long hunting tradition is evident in the Harviala forest, resulting in some unusual features: in the middle of a typically Finnish spruce forest there is a broad corridor of deciduous trees, towards which the elks are driven by beaters and where the hunters wait on platforms.

“As far as we know, the area has been kept open by removing young trees since the 1950s, so hunters have a good visibility here,” Juha-Matti Valonen explains, pointing out that the deciduous trees left in the corridor, especially aspen, are important for biodiversity. In a young stand nearby some stout and tall aspen have also been left as retention trees.

The corridor is bordered by dense forest, which forms a transition area and provides shelter and food for a variety of species. Called ecotones, these areas between forests and mires or forests and waterways, for example, have a special importance. They are an integral part of nature management and game-friendly forestry, which has become a natural part of forest management in Finland in the past few years.

The shelter provided by ecotones is particularly important for different species of grouse and their chicks. Now in November, close to thirty wood grouse cocks are engaged in their autumn courting on the nearby mire, and when Perttu Valonen blows in his grouse whistle, a hazel grouse replies immediately.

“If nature management is properly presented and argued for, almost every forest owner welcomes the practices,” says Valonen, who also trains UPM’s forest experts and entrepreneurs.

Improving biodiversity does not need to be particularly laborious or costly. “The management of commercial forests actually means that you actively leave things undone. You leave deciduous trees, retention trees and decayed wood in forests and set up protection zones along the waterways.”

In addition to information for forest owners and experts, forest certification contributes strongly to the implementation of nature management. Because the width of the ecotones or the proportion of deciduous trees is precisely defined according to the FSC certification used in the UPM forests, the forest owners are better informed and the management gets easier, says Valonen.

The Harviala forest area of about 8,000 hectares consists of commercial forest, as do most Finnish forests. In Finland, commercial forests have a number of uses: it is possible to grow logwood, protect nature, hike, pick berries and hunt all in the same forest area.

Traditionally, Finns visit forests on their own or with family members, but elk hunt makes an exception. From October to December, troupes of hunters dressed in orange hi-vis gear can be seen among the trees.

Elk is the the largest and heaviest species of the deer family in the boreal forests, with a shoulder height of almost two metres and a weight of over 600 kgs. In Finland, an elk hunter must be a member of a hunting club, each club must have a designated leader of the hunt, and a whole range of permits and licences are needed.

While game-friendly forestry is needed to make commercial forests more suitable for bird species, opposite measures are needed for elk: Finland’s huge elk population must be controlled to avoid traffic accidents and damage to agriculture and forestry. Young pine trees especially suffer from elks eating their tops. Therefore, the animals are steered away from seedling stands and roads with the help of salt lick blocks and fields cultivated specifically to feed game.

Every year, tens of thousands of licenses for hunting elk are issued, 55,000 this year. In terms of monetary value, elk is the most important game animal in Finland.

In Finland, elk hunting is not trophy hunting. The bag is shared by the hunters and the forest owner, and the whole carcass is utilized, as far as possible.

The Valonen family rarely queue at the supermarket meat counter, as not only elk, but also deer and game birds from the forest are found in their own freezer. As regards berries, mushrooms and fish, too, the family is almost self-supporting.

“Hunting is a very ecological way of life and game is local food at its best. Still, only a few hunters know how to make use of the entire carcass,” Juha-Matti Valonen says, adding that Perttu will also cook the elk tongue and liver.

The co-ordination of ecology and rational use also illustrates Valonen’s relationship to forests. Forests can be managed, felled and used, as long as environmental issues are taken into account. Both father and son have spent a great deal of their lives in precisely commercial forests, observing nature and drawing on its resources.

“You don’t need a particular reason to go to the forest – it is just full of experiences. But bring your binoculars and rifle, just in case,” says Perttu Valonen.

The International Day of Biological Diversity 2022 is celebrated today with the thema Building a shared future for all life – we asked, how to take care of the well-being of pollinators in forests. #BiodiversityDay #pollinators https://forest.fi/article/vitally-important-pollinators-should-be-looked-after-in-commercial-forests-too-new-guidelines-improve-forest-biodiversity/#cbd93772