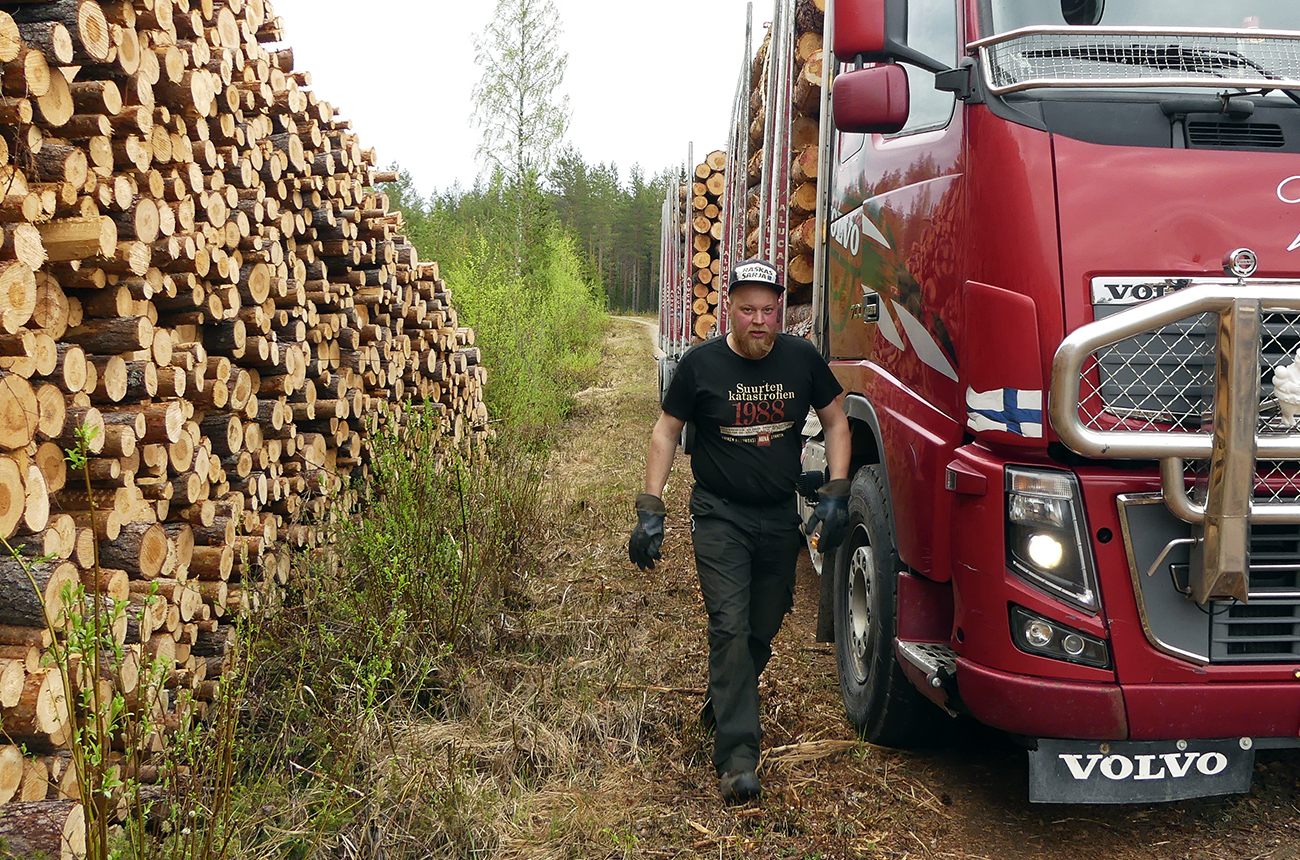 ‘It is very important to be aware of the local conditions. Then you’ll know the appropriate time to operate on each road, and can fetch the timber safely,’ explains Teemu Koistinen, who drives a timber lorry in the Upper Savo sub-region. Photo: Päivi Mäki

Finland’s extensive network of forestry roads is essential for the timber supply. The major part of private roads is in need of an overhaul, but to a large extent this is not done. The public funding is not a sufficient incentive. forest.fi took a look at activities that would keep forestry roads in good shape.

The consumption of domestic roundwood has clearly increased for the last few years. Because of several investment plans in the forest industry, the use of roundwood is expected to further increase in the near future. Therefore, it is a top priority to ensure good transport connections.

The extensive network of forestry roads was mainly built in the 1970s and 1980s. Managed properly, a road will stay in adequate shape for 20 to 30 years, and after that it will need a complete overhaul. If annual maintenance is neglected, the overhaul will become necessary sooner.

‘The annual volume of overhauls has been decreasing since 2015. One reason for that is the radical change in the operating environment some years ago. Before that, the state-funded Finnish Forest Centre was in charge of most of the overhaul work. Nowadays all the work is market-driven. Unfortunately, the number of operators is not enough,’ Nousiainen adds.

The sustainable forestry financing act requires that to qualify for a subsidy, a minimum of 30% of the the traffic on a private road must consist of forestry-related transport. The load-bearing capacity of the road must also be sufficient for modern timber lorries.

Decisions are made by road associations

‘State subsidies are at a good level. The problem is that we just don’t get enough projects in. The decision-making mechanism may also slow down the road repair projects. The main part of forestry and other private roads are managed by private road associations. In them, all decisions are made as majority decisions on the basis of voting rights, which are determined by the benefit derived of the road. Hence, quite often there is not enough willingness to repair the road,’ Nousiainen says.

It has also been noted that the road keeper may not be sufficiently knowledgeable or active. For example, regular road maintenance activities, such as grading, resurfacing with gravel, clearing of roadside vegetation and opening of ditches and drums, should be done yearly. During the mud season road signs indicating the weight restrictions must be displayed. Repairs of the foundation or road surface should be carried out as needed. If the road has received government subsidy, the road keeper is obliged to maintain the road for ten years.

There is a good tool kit, available free of charge, for determining the maintenance and improvement needs of forestry roads. The forest owner or road association member can use it to evaluate the condition of the road and then request a cost estimate from a contractor. The tool kit is available from the Tapio advisory and consulting company.

An improvement of the road network is also urgently needed because the vehicles carrying timber and wood chips have become significantly larger. The total weight of a full-trailer lorry has increased from 48 to 76 metric tons. The lorry length is now 25 metres.

For the driver of a timber lorry, roads in poor condition are part of everyday work. Before entering a forestry road, its load-bearing capacity needs to be known. Sometimes this information comes from the customer, sometimes the driver has to check the situation on the spot. Problems occur when the full trailer needs to make a turn.

‘The most difficult places for modern lorries are turning bays, junctions with sharp bends and tricky turnings. It is very important to be aware of the local conditions. Then you’ll know the appropriate time to operate on each road, and can fetch the timber safely,’ explains Teemu Koistinen, who drives a timber lorry in the Upper Savo sub-region.

‘A timber lorry is quite flexible in itself, and it can be turned in a quite narrow space (compared to its size), if needed. Even more problems occur with chip lorry trailers. For them the old turning bays are far too small,’ Nousiainen says.

Timber logistics is also challenged by the mud season every spring and autumn. The mud season lasts from a few weeks to a couple of months.

‘The mud season has been getting longer. Usually the spring mud season has been the more challenging one. However, in the last few years we have experienced very bad autumn mud seasons: as it rains, the temperature stays above zero and there is no ground frost. In that situation the roads cannot carry heavy vehicles and the timber remains in intermediate storages in the forest. Roads that have been properly overhauled are usable even in exceptionally rainy seasons,’ Nousiainen points out.

According to Koistinen, this spring the mud season was quite short in North Savo.

‘Often some minor maintenance work is enough to keep the road usable even in wet conditions. Clearing the roadside of tree shoots and other vegetation and keeping the ditches open are important for draining the road structure. Another good job is providing a good gravelresurfacing , which prevents the surface from turning into slippery mud even when it rains,’ Koistinen says.

Nousiainen estimates that the cost of measuring the load-bearing capacity is about one per cent of the total project budget. In contrast, the different layers of road structure, such as crushed stone and gravel, can easily take up more than half of the total cost. This being so, a road improvement project should always be planned and implemented carefully.

The most important task in road management is the good drainage of the road structure. Careful construction work and drainage also bring savings in the volume of crushed stone. Nousiainen knows of cases where the volumes needed for the top layers have been reduced by as much as 70 per cent, thanks to proper drainage.
More training and information is needed

Timber buyers prepare for the mud season by transporting timber to storage areas alongside main roads ahead of time. Thanks to this, mills have access to raw material throughout the year. Sometimes the timber from a logging site is attractive enough that buyers are willing to repair a forestry road with crushed stone, in order to get the timber out of the forest.

‘The forestry road is often the critical link in the timber procurement chain. In Finland we have a new tool, the Forest Harvestability map, that shows the load-bearing capacity of the soil and indicates when timber harvesting is possible in a specific area. Thanks to it, the timber can be brought next to the forestry road, but long distance transport will cause problems and delays,’ Nousiainen says.

Nousiainen points out that an electronic system with information about the load-bearing capacity of roads and about contact persons would improve the situation.

‘We are not getting in enough projects to renovate forestry roads. In order to boost road maintenance a bit we should increase training and information. We need to enhance the level of know-how and quality among the actors and provide more guidance to private road associations. If all our 50,000 road association recognized all the benefits of a good-quality road and also knew about costs and subsidies, there might be more willingness to improve roads,’ Nousiainen believes.

Nanocellulose promotes wound healing. FibDex, a wound care dressing made from nanocellulose and the winner of the New Wood 2021 Competition, speeds up wound healing and reduces pains experienced by the patients. #Uusipuu #NewWood #nanocellulose #innovation https://t.co/lWMa5z6l6R