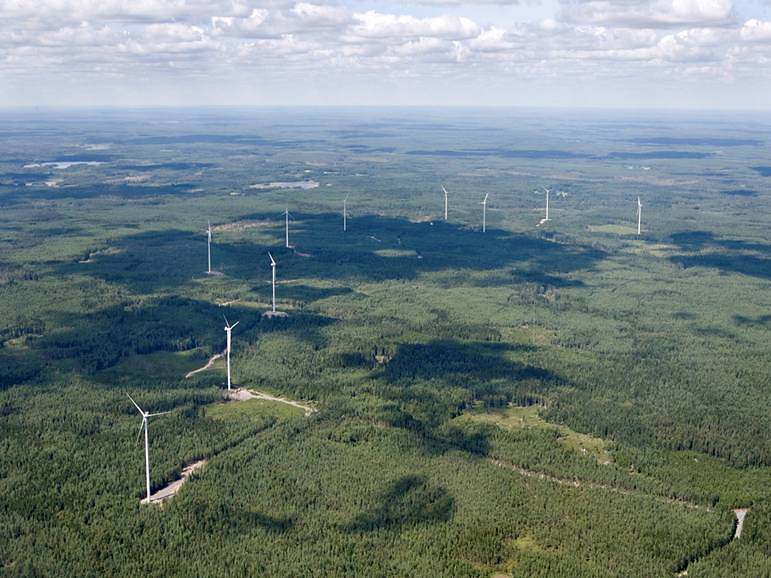 Three of the wind farms planned by Metsähallitus are under construction and the first ones will start producing electricity later this autumn.

Metsähallitus is currently planning to construct nine wind farms in the northern part of Finland. Their main purpose is to increase the profits generated on state-owned lands. As a state-owned enterprise, Metsähallitus has to invest in Finland to help achieve its targets for the use of renewable energy.

Mr. Erkki Kunnari, Metsähallitus’ Manager for wind power does not divulge the going rate for leasing out state land to wind farms, but refers to the ballpark figures published in the media. According to those, landowners are paid EUR 5,000 to 15,000 annually for leasing land for a windmill.

He agrees that for a private forest owner, the income generated by a windmill can be significant. On the scale of Metsähallitus, which administers all state lands, the profit is good, too.

The potential related to wind power has been developed in Metsähallitus for years. In 2008, the company looked into the business potential of state lands and the possible role of Metsähallitus in energy production.

SBased on that survey, Metsähallitus decided to try to get as many wind farms on to state lands as possible. No specific numbers were set, however.

Kunnari says Metsähallitus does not want to be a passive landowner, content with providing land for others to use. Thus, Metsähallitus searches sites suitable for wind farms, develops them for wind farm construction and tenders them to investors.

MDeveloping the site means that Metsähallitus has the area set aside for a wind farm in land use plans, commissions an environmental impact assessment, measures wind flow and speed and plans the required infrastructure, such as mill sites, access roads and electricity transmission.

Metsähallitus will not become a wind farm owner.

Good site is sum of many parts

Places suitable for a wind farm have to meet several requirements. There must be enough wind, accessible power lines must be capable of transmitting the electricity and the wind farm has to be compatible with the environment and other land uses in the area.

The Finnish Wind Atlas compiled by the Finnish Meteorological Institute is a help, as are local knowledge and topographic maps – the higher the spot, the windier it will be.

The state of the local network of power lines is important, as the electricity generate by the windmills has to be transmitted cost-effectively to the user. “For example, there are areas in Lapland where it would be pointless to build a wind farm, as building the requisite power lines would eat up any profit from the investment.”

SAs a big landowner, Metsähallitus can work out the optimal locations of wind farms. A wind farm cannot be built in a protected area or an area belonging to the Natura 2000 network or too close to inhabited areas. In practice, the wind farms planned by Metsähallitus will be built on forest land or other less valuable land used by forestry.

Other land uses affect windmill construction, too. If there are plans to build a skiing centre in the area, possible conflicts between different forms of land use must be reviewed and resolved.

In the reindeer herding area, the location of windmills and their access roads affect the movements and herding of reindeers. “So far, we have found acceptable solutions,” Kunnari says.

According to him, wind power and forestry complement each other exceptionally well. Each windmill requires a well-constructed access road, which can also be used by forestry. A windmill site is cleared of vegetation, but it will only require 0.5-1 hectares to be removed from forestry use. Forestry activity can be carried out right beside the windmill.

No mill in my back yard

People have divided opinions on wind power, which has not escaped Metsähallitus. “It is really a well-accepted form of energy production – as long as it’s not happening in my backyard,” Kunnari says.

The visibility of wind farms is increased by the facts that windy areas tend to be on higher ground than surrounding areas and there is no way to hide an industrial-sized windmill.

During the past five years, Metsähallitus has gathered know-how and expertise on nearly ten wind farm projects. It might not be a bad idea for them to add wind farm consulting to their list of business activities.