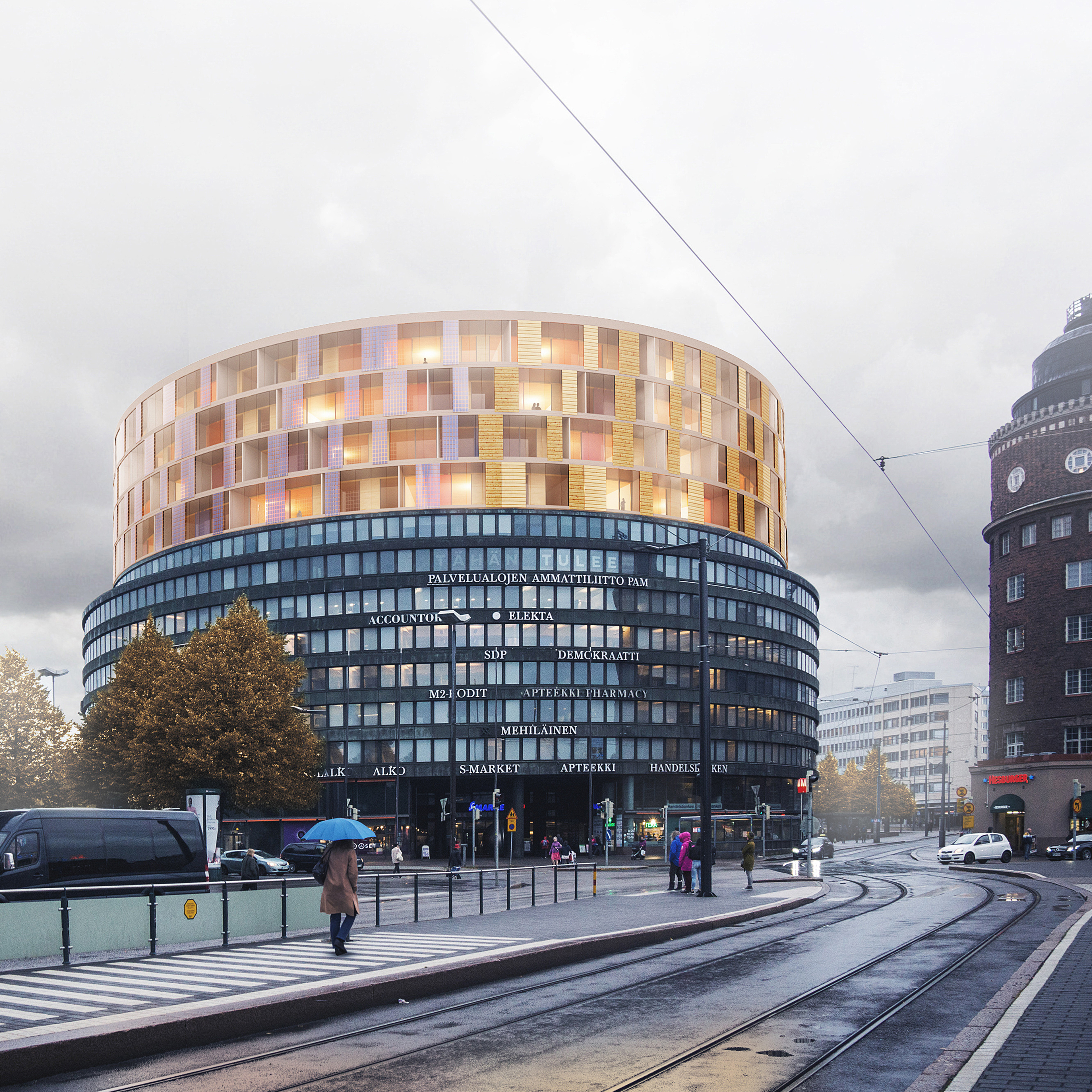 The potential of using wood for additional floors is well illustrated by this plan submitted to the Metsä Wood competition, modifying the circular Ympyrätalo building, one of the landmarks of Helsinki. The Plug-in City proposal was designed by the architects Jari Lonka, Francesco Allaix and Lilja Mustila. Photo: Metsä Wood

At least one in every four multi-storey buildings in the cities of Western countries are sturdy enough to bear additional floors made of wood. And indeed, more than just one: a shopping centre in the Netherlands was refurbished with 16 new floors on top of the existing ones.

For the property developer, the crucial parameter is the time taken by the overall construction process, which includes the construction of the elements at the factory in addition to time spent on site: the shorter the overall time is, the more rapidly there will be a return on the investment.

But how much faster is the construction? ”Significantly,” answers Saavalainen, but says he cannot be more specific as the time required varies greatly depending on the building, and especially so when putting extra floors to an existing building.

”Still, as an example, we have roofed industrial buildings at a speed of 1,500 square metres per day. That is pretty good,” says Saavalainen.

Cost of renovation is paid for by extra floors

Expanding cities throughout the world could make use of additional floors. In 1990, 40 percent of the world’s population lived in cities, but in 2050 the figure is estimated to be 70.

Residential condominiums struggling with their finances could also benefit from additional floors. In Finland, where condominiums are called housing companies, even companies in growing cities may find that their building is not valuable enough to serve as security for a bank loan to finance essential renovations.

Demolishing the building is always an option, but if the company decides to build additional floors and sell them, it may gain enough money to finance the renovation and residents can keep their homes.

Constructing more floors also mitigates the housing shortage in another way: it slows down the migration to cities. ”Forests grow in rural areas. Managing and harvesting them, transporting the timber and constructing the wooden elements in factories create jobs in the countryside. As a result, fewer people need to move to the cities,” says Saavalainen.

Interest is expressed from many quarters

According to Saavalainen, there is an enormous potential for constructing additional floors. ”In the German cities of Hannover and Bonn it was found that additional floors could be constructed on 27 percent of the buildings without any structural improvements to the lower floors,” says Saavalainen.

If the same applies to all of Germany, the construction potential comes up to more than one hundred million cubic metres. ”This is more than the estimated need for additional construction in the whole country,” says Saavalainen.

Designers and architects have also shown a keen interest in the matter, as was shown by the competition organised by Metsä Wood last year. ”We invited proposals for adding floors to existing buildings. We received 174 proposals from 40 countries,” says Saavalainen.

Already before the competition, 16 additional floors had been constructed on top of the Karel Doorman shopping centre in the Netherlands – though not entirely of wood: the floors were reinforced with steel.

”For us this is not a problem, though. The designers must have the freedom to choose the materials. We are in favour of using the optimal combination of materials in each project,” says Saavalainen.

”Our aim is to help the work of designers by, for example, providing know-how. This is the best philosophy for a multinational company like ourselves, because each country has different methods and practices of construction,” says Saavalainen.

Plan B project of Metsä Wood