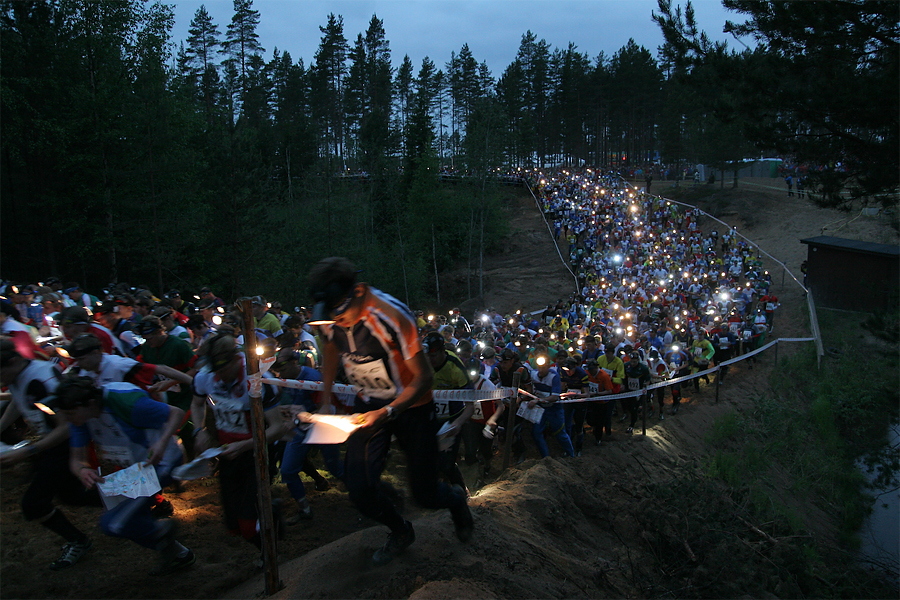 Earth is almost quaking when roughly 1,400 teams start Jukola relay in the darkness of the night. Photo: Tampere-Jukola organisation

The Jukola Relay Orienteering Competition takes place at night, and what a long night it is. But it is impossible not to follow it because it is simply just too engaging.

The Jukola Relay is the culmination of early summer for many Finns whether they attend the event on site or follow it on the radio at home or on their summer cottage. Listening to the Jukola radio broadcast is often an essential summertime ritual.

Jukola is a part of Finnish cultural landscape. Its name derives from a book called “The Seven Brothers”, published in 1870 by one of Finland’s national authors, Aleksis Kivi (1834–72).

It was one of the first novels ever written in Finnish. The book’s seven main characters, the seven brothers, live on an agricultural and forest holding called Jukola.

But the name has another meaning, too: the Jukola Relay can literally be understood also as the Jukola message in Finnish. It is a message from the Jukola brothers to present generations, as well as a concrete message that is announced on stage at Jukola and passed over to the winner of the race.

The Jukola Relay is open to both men and women. During the Jukola weekend there is also another competition, the Venlas’ Relay, and it is for women only. It is named after the maiden Venla, who was the object of dreams for all seven brothers.

The Jukola Relay is enormously popular. Last weekend there were 14,000 competitors from 2,000 teams participating in the 60th Jukola relay that was organised in Tampere. Overall 30,000 people took part in the whole event.

In fact, the massive event is now reaching its limits and bordering on whether it is humanly possible to organise a larger orienteering event.

Picking the route is the competitors’ business

The orienteers can choose their routes freely, as long as they visit each control in the given order. To prove that they have done this, the orienteers must punch in at every control with a special device.

If this is not done correctly, the performance is disqualified. The relay team decides the order of its members’ performance, and the team who visits all controls the fastest is the winner.

However, that is not all there is to it: in Jukola the entire race happens at night. The timing of the event gives a whole new angle on orienteering, and not only for the spectators, who can follow the competitors’ headlamps glow-worming their way through the terrain.

For a non-Finn this may sound a little unusual. But not for Finns: everyone knows that on the Saturday night a week before Midsummer you can listen to a whispered commentary from Jukola on the radio – whispered so as to avoid giving away the position of the control point where the commentary is given.

“But why orienteering? Aren’t there other, more intellectually challenging sports, such as soccer or basketball,” a Finnish newspaper asked the executive director of Kiilto company, Mr. Antti O. K. Nieminen, who participated the Jukola relay as a member of a team put together among the executives of his company.

Nieminen replied that in his opinion orienteering requires more maturity and experience than soccer, and feels that this is what makes it so appealing.

The Jukola Relay is one of the many Finnish sport events that combine top-ranking athletics and everyman’s exercise. On the track you can see tough sportsmen and women as well as ordinary people representing all ages, looks and styles. You could say that the entire Finnish people are competing in it, with additions from other nations as well.

In fact the participants of the event are very international. The race is very popular among Swedish and Norwegian competitors, and this year there were no less than 20 nations represented in it. The farthest participants came from Australia, where even the needle of the compass points in an opposite direction than in Finland.

Indeed, the orienteers carry two important devices: a compass and a map. Normally a compass is not often needed; it is possible to find your way in Finnish forests by following the map and the terrain.

But darkness changes everything, as you cannot see the terrain very far. The orienteers use powerful headlamps to find their way about, but even this cannot change the fact that forest is very, very dark.

That is why a compass, attached to the orienteer’s finger, proves useful. Competitors are prohibited from using satellite navigation to navigate themselves, but the organisers can follow the progress of top-ranking teams with the help this technique – and show it on the large television display located in the competition centre as well as on-line through the web for everyone to watch.

Before the information from the terrain was more or less vague, but now, thanks to latest technology, it is possible to follow on-line how the leading teams mooch around looking for the controls in the terrain. The order of the teams is determined immediately after they have punched themselves in at the control, because also punching is done electronically.

All this increases the tension and excitement of the relay enormously. It also enables the spectators to make their own absorbing analysis of what is going on.

From dusk to dawn

The Jukola Relay starts at 11 pm. Last weekend’s winner came to finish few minutes after 7 am.
There are as many legs in Jukola as there were brothers in Kivi’s novel – seven. The first legs take place in a dark forest; last Saturday the sun set only a couple of minutes after the start. The sun rose again at a quarter to 4 am, which naturally facilitated the orienteering.

Normally the shortest leg of Jukola is less than eight kilometres, while the longest one is around 15 km. This year the whole track totalled 76.6 kilometres.

The more difficult the terrain is, the shorter the leg. The length is calculated as a direct route from one control to another, but no one makes it direct. In reality the distances are much longer.

There are four legs in the Venlas’ Relay. This year the length of its track was 27.9 kilometres. This race kicked off at 2 pm on Saturday, and the winner came to finish few minutes after 5 pm.

In the end winning is not everything

Against the backdrop of all this information the fact remains that the night of Jukola is very long. Some might argue that it is boring because all legs are run within the same terrain and with similar teams.

In reality, however, the situation changes so rapidly and frequently that the relay really grabs every spectators’ attention. One moment the second one may be three minutes’ distance behind from the leader, but the distance can shrink into a couple of dozen seconds if the leading team cannot find the next control easily.

Even the latest technology cannot keep up with the competitors when they are out in the terrain, which further increases the excitement: what is happening right now? Perhaps a team without the satellite monitoring device has taken the lead, or perhaps its has dropped below 30 in the ranking.

The orienteers come to the competition centre only for the changeover between the legs. In the cold and rainy weather – the temperature was around ten degrees centigrade in the middle of the night – they stubbornly push forward, muddy clothes wet up to their armpits, some with grey hair, some only juniors, some running with great effort, some as if on springs, but all with a shared determination to reach the next changeover – because dropping out of the race would not only mean letting down yourself, it would also mean letting down the team.

At dawn you realise something that was not so important in the evening. Only after spending a night at Jukola you can understand what it means to say that an honest competition is more important than victory.