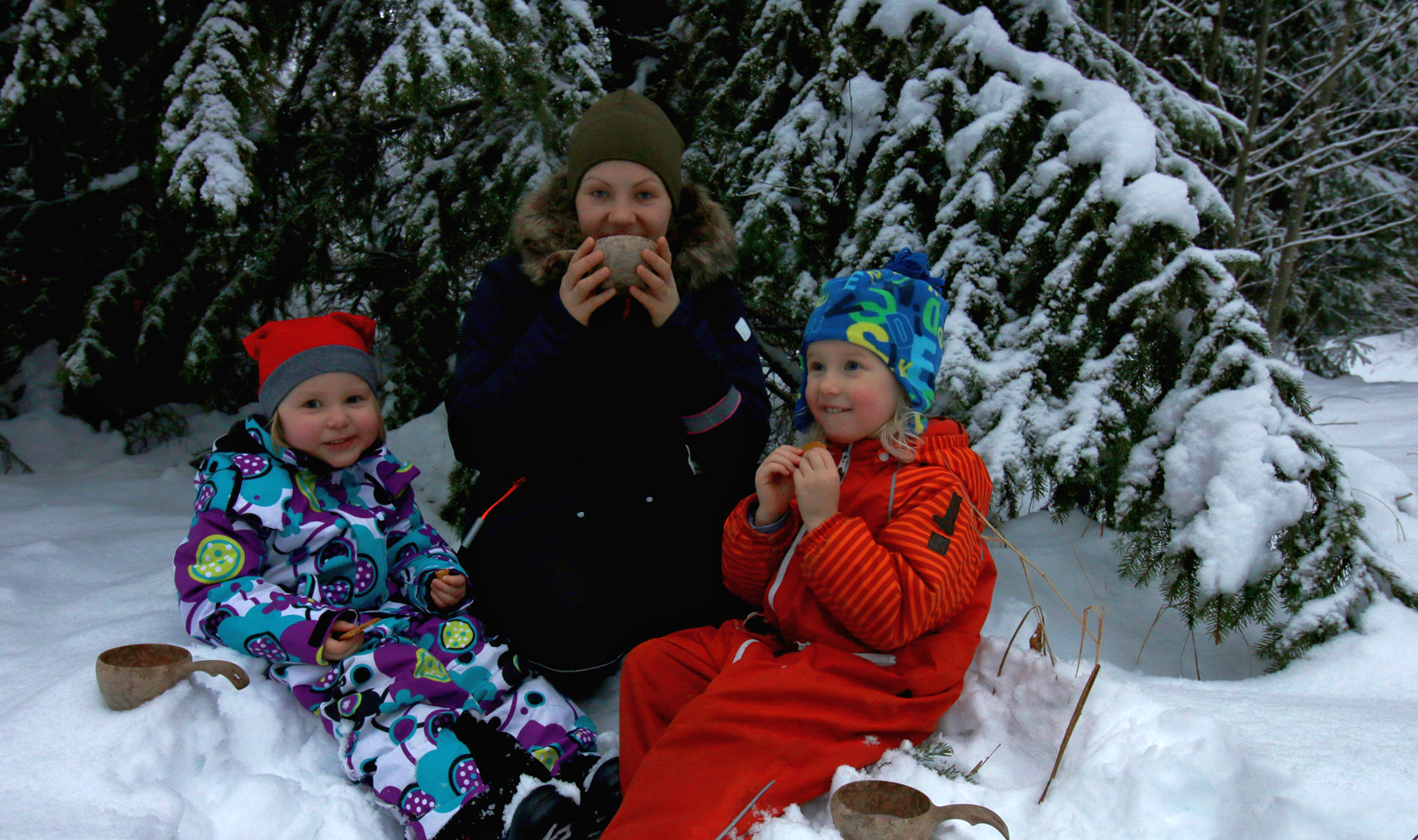 Finding a Christmas tree is important on a winter picnic, but gingerbread and hot chocolate may be even more essential, at least according to Taimi Hamunen, Rauni Korhonen and Lotta Palmio. Photo: Inkeri Palmio

forest.fi waded through a thick layer of snow in a spruce forest, locating a particular Christmas tree by GPS coordinates. Although someone else had already found the tree cached by the local Forest Management Association, the search did help us to get into the proper Christmas mood.

It’s still dark outside, but we are packing our thermoses, gingerbread and sleds in the car. We need to be out and about early enough, if we want to be the first ones to find the Christmas tree donated and cached by the local forest owners’ Forest Management Association.

Not too early, though. The association will publish the GPS coordinates of where the tree is found at eight in the morning, and only then will we know where to head our car.

At eight we see that two Christmas trees have been cached by the association in North Savo. One is somewhere near the crowded Matkus shopping centre south of Kuopio. We choose the other one, situated in the southern part of the Tervo municipality. We figure that after the recent snowfalls, the snow depth being close to half a metre, there won’t be that many other tree hunters in this sparsely populated area.

According to the Finnish Christmas Tree Growers’ Association, about half of the Finnish households purchase an evergreen tree to create a festive Christmas atmosphere.

In the countryside people have traditionally fetched the tree from the forest themselves, but nowadays this has become less frequent. In addition, you need to have permission from the forest owner to do that – unless it’s your own forest.

Small wonder, then, that looking for the trees donated by forest owners is popular.

It is quarter past nine and we are almost there. An update from Kuopio tells us that the Christmas tree next to the shopping centre has been found, only 15 minutes after the GPS coordinates of the cache were released.

But then, fresh tyre tracks on the snowy forest road make our hearts go pit-a-pat: are we too late after all, did someone else beat us to the post?

A car parked at the roadside confirms our suspicions. In a few moments, too, we see a couple pulling a spruce tree behind them along the road.

”The cache in Kuopio will have been busy today. This cache was a smarter move,” say Anne and Lassi, happily clutching their tree. They had driven 35 kilometres from the town of Suonenjoki to get to the tree first.

Nor was this the first time for this couple to find a Christmas tree cache.

He even got a tree his first time four years ago, despite arriving as late as three days after the cache had been published.

Felling trees owned by others is not done

”Judging by my experiences from last year at least, Christmas tree caching is clearly becoming more popular,” Lassi says. According to the Association, a more accurate assessment would be that the popularity varies.

”Especially if the trees are cached close to urban areas, the caches have had several visitors, even up to ten,” says Juha Huttunen, Sales Director at the North Savo Forest Management Association. The association takes part in the campaign for the fifth time.

This year the campaign was participated in by 40 Forest Management Associations all over the country. With the campaign, the associations want to wish everyone a merry Christmas and to remind people that felling Christmas trees is not allowed by law or the traditional “everyman’s rights”, under which you may roam even on private lands, pick berries and gather mushrooms.

The geocached trees marked with red ribbons by the Forest Management Associations are an exception. ”We have cached the trees in forests owned by private persons, local authorities or parishes,” Huttunen says.

Trees growing right beside a road will not be cached, so that those looking for them would have to do some walking in the forest. For those preparing the cache, however, the walk in a snowy forest will have to be longer, because they need to reach the cache in a roundabout way instead of straight from the road, in order not to leave tell-tale tracks.

“The distance from the nearest road is usually less than 100 metres. The caches are fairly easy to approach, but in a snowy forest, preparing the cache is more demanding, as you’ll have to cover your own tracks, too,” Huttunen smiles.

Throughout the history of the campaign, people have been pleased by the appearance of the cached trees. ”We’ve never had second thoughts about whether to take what we’ve found,” Anne laughs.

”We don’t look a gift horse in the mouth. I even use some of the ribbons used by the Forest Management Association to decorate the tree,” Lassi assures.

Local associations of forest owners, the Forest Management Associations, donate Christmas trees, cache them in the forest and publish their coordinates on the Internet at a time specified in advance.

Anyone is allowed to look for the tree caches in the forest, just as in geocaching. The first person on the spot may keep the tree.

The campaign was first started by the Forest Management Associations in the Tampere region in 2010. This year, the campaign has spread to 40 associations around the country.

Till next year with new interesting articles!