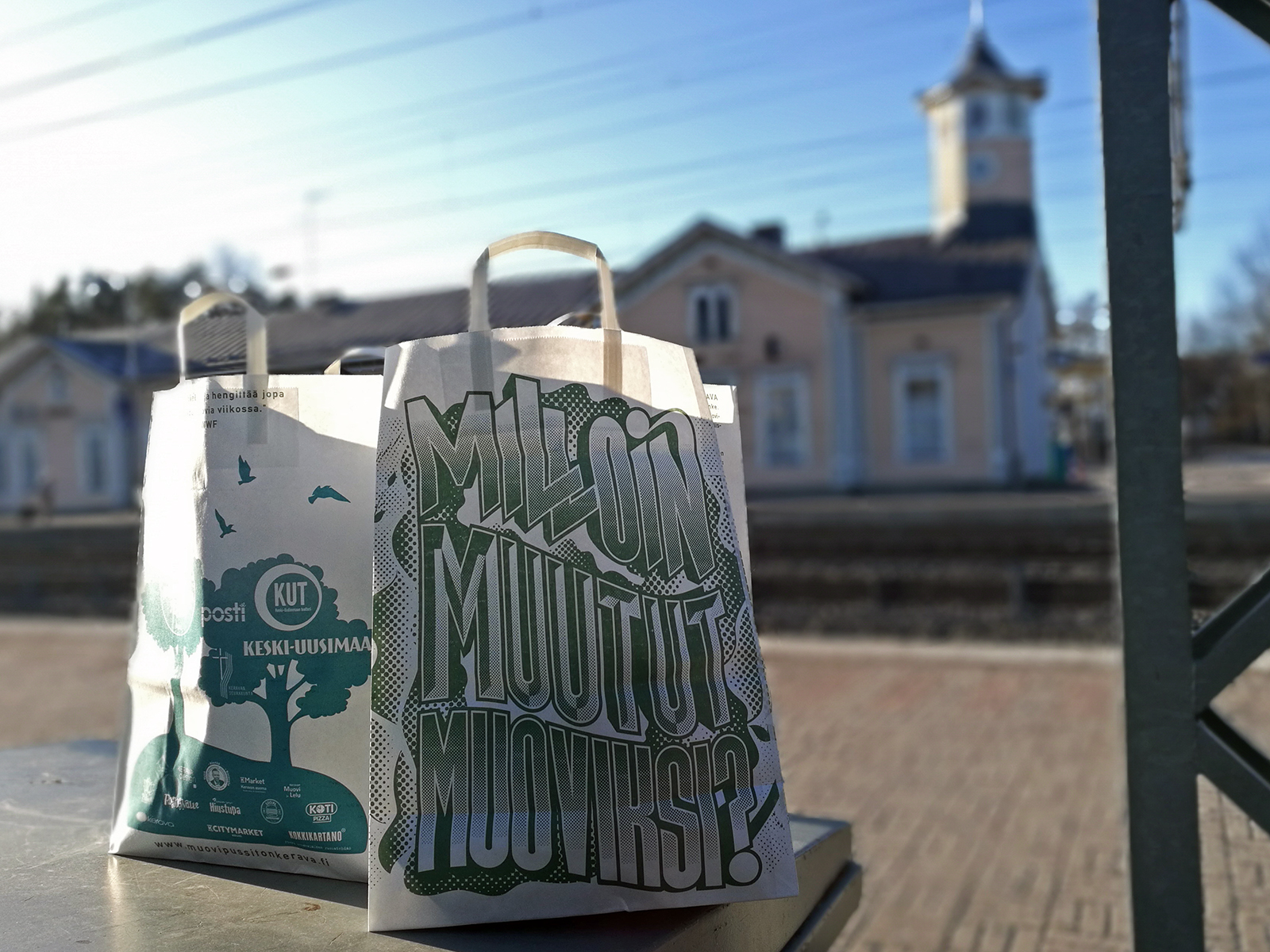 The Kerava landmark is its railway station, built of wood in 1878. The town now wants to become famous for being ecological. Photo: Anna Kauppi

The town of Kerava wants to be the first town free from plastic bags in Finland and Europe. Its partner in the project is the Finnish Paptic company, whose innovative wood-fibre material was developed to replace plastic bags and packaging plastics.

This week, residents of Kerava found in their post boxes a light-coloured bag the size and feel of a paper carrier bag. The accompanying text asked them to fold it up in their coat pocket and use it repeatedly – and thus contribute to making a better future.

Ultimately, the bag made of the Paptic material can be recycled as cardboard. It is sturdier than a paper bag, and the material is also water-resistant. The innovation was originally created in response to the increase of plastic waste in oceans, which has become a serious environmental threat.

“Consumers want to use sustainable alternatives, as long as they are made aware of them,” says Esa Torniainen, CBDO & Co-Founder of Paptic Ltd.

“The Plastic Bag Free Kerava project is a wonderful application of the idea ‘Think globally – act locally’, by informing the townspeople about the options available.”

The bag asks you when you will become plastic

The Plastic Bag Free Kerava project was started in November 2018, receiving a great deal of publicity both in Finland and abroad. Kerava, situated on the fringes of the Helsinki Metropolitan area and with a population of 37,000, wants to be known not only for its Circus Market and Garlic Festival, but also for being ecological.

Among other things, workshops for sewing reusable carrier bags have been arranged in Kerava. Many shops have completely stopped providing plastic bags at checkouts, and the residents have been encouraged to talk about eliminating plastics.

“Plastic bag free Kerava actually transcends its original idea in that it leads to broader debate on the present state and future directions of environmental and climate issues. As a result, people may think about their personal choices and start making better ones,” says graffiti artist Jouni Väänänen.

Väänänen has designed the ’When will you become plastic’ graffiti on the bag. The question refers to a calculation by the WWF, according to which we swallow and inhale up to 5 grams of micro plastic every week.

Recyclability of material is essential

According to the project, the concept created within it is easy to implement in other towns and cities or locally by shopping malls, for example. The main aim is to reduce plastic waste by doing something concrete. The project poster states that in Finland alone, 300 million plastic carrier bags and 900 million thin bags for fruit and vegetables are consumed.

“As we began implementing this project, I thought it self-evident that we would collaborate with Paptic in the course of it. It is great that we can present Kerava residents with an option that is easily recyclable and can be re-used many times,” says Mari Granström, founder and leader of the project, who has made her career with biochemicals and circular economy.

Granström has succeeded in involving quite a number of the companies in Kerava with the project. Some of the partners are WWF Finland, Posti, Alko and the major retail chains HOK-Elanto and Kesko, as well as the local theatre, a media company and the Evangelical-Lutheran parish.

The Sokos department stores have changed over to using Paptic carrier bags. They wish to pilot the replacement of plastic carrier bags with bags made of renewable materials. The world-famous Galeries Lafayette in France have also started using bags made of material manufactured by Paptic.

Esa Torniainen from Paptic truly believes that the Paptic bags will be re-used multiple times, since the material is foldable and durable and resembles textile material in its functionality.

“In terms of energy consumption per times used, a Paptic bag is absolutely superior to plastic bags,” Torniainen notes.

Still, he wants to point out that energy consumption is not the only aspect to bear in mind. Another essential thing is the recyclability of the material. Being wood-based, Paptic bags may be composted industrially.

“Even if you throw it out by the wayside, it will definitely decompose faster than a plastic bag,” Torniainen promises.