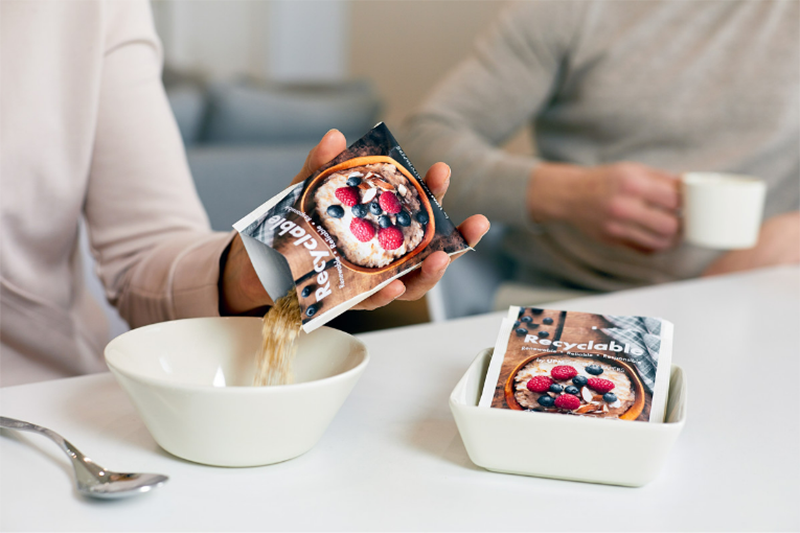 Asendo Pro paper can be used to replace conventional plastic packagings and is recyclable and compostable. Photo: UPM

We listed six recent innovations in Finnish bioeconomy that reduce the use of fossil materials in packaging and boost recycling.

According to UPM, even when made of paperboard, juice cartons and similar beverage packagings contain about one fifth of fossil plastics. However, thanks to the bio-based Bio Verno naphtha by UPM, the paperboard packaging can be completely wood-based and recyclable.

The naphtha is made of tall oil, a sidestream of pulp production, at UPM’s facilities in Lappeenranta, eastern Finland. It can be used to make plastics, adhesives and self-adhesive label stock.

Stora Enso and the Swedish salad bar chain Picadeli are replacing the plastic lids of salad containers with lids made of renewable fibre. According to Stora Enso, the lids contain no plastics and are biodegradable and recyclable.

Pick-and-mix salad bars in grocery shops are popular in the Nordic countries and use enormous numbers of salad containers. The actual containers are of paperboard, and the new solution reduces the plastic waste from Picadeli’s salad bars by about 120 tonnes per year. The companies say that the carbon footprint of the new lid is up to 75 percent less than that of other options, such as plastics or sugarcane.

Stora Enso says that the fibre can also be pressed into shapes that suit other disposable food packagings, such as non-plastic beverage cups, bowls, plates and box-type packagings.

The Viipurilainen Kotileipomo bakery wanted to redesign its cake boxes, and the solution was provided by Metsä Board. The bakery, founded in 1924, and the forest company developed a recyclable box which, according to the designers, reduces the consumption of material by one quarter and the carbon dioxide emissions by about one third.

The use of plastics was cut down and the bakery says the new boxes can be assembled more quickly than the old ones.

The packaging company Pulpex and Stora Enso will take into use an industrial-scale production line for wood-based bottles and packagings within the year.

According to Stora Enso, the new bottles are renewable, recyclable and biodegradable. The company says that their carbon footprint is significantly smaller than that of glass or plastic bottles and that their properties are on a par with conventional beverage packagings.

Read more: Wood-based bottles for liquids scheduled for production in 2022

In May 2021, UPM introduced the Asendo Pro paper for food packagings, made of renewable materials.

The paper is suitable for packaging both dry and fatty foods and baked goods, as well as for frozen foods. It can be used to replace conventional plastic packagings and is recyclable and compostable.

Metsä Board’s revolutionary golf ball box can be recycled as an insect hotel. Manufactured of folding boxboard for the Golf Coat company, the box was designed in collaboration by a design consultant, Metsä Board and a packaging company.

“In 2021, we organized 36 virtual workshops with our customers and partners. Some of the workshops focused on improving our current packagings, while others created something completely new, such as this insect hotel,” says Customer Experience Manager Gunilla Nykopp in a press release by Metsä Board.

Read more about  the newest products and services of forest bioeconomy in Forest.fi’s Future Catalogue!