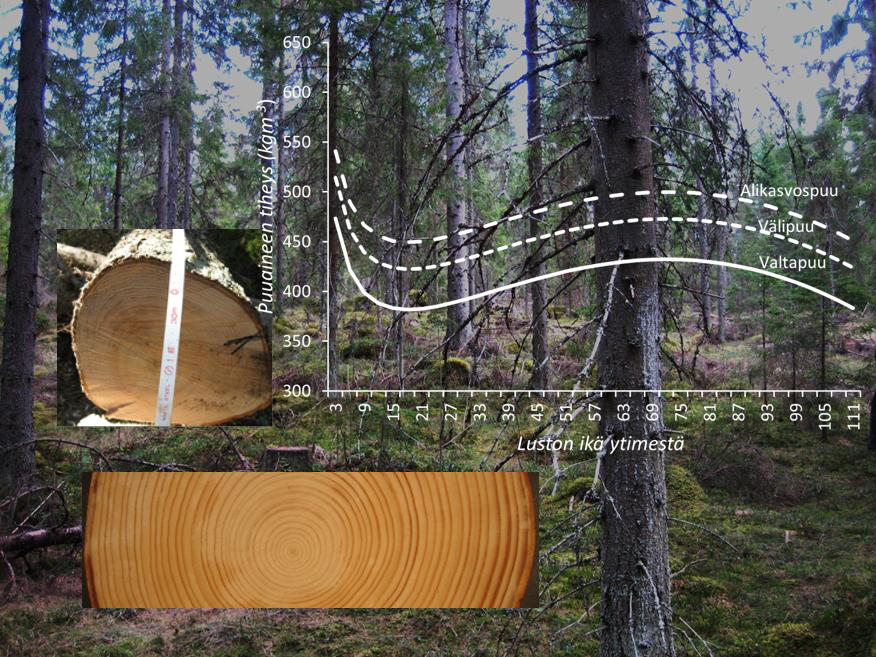 Wood density in uneven-aged spruce in different canopy layers. The x-axis represents the number of annual rings from the pith, or age of the tree. Y-axis represents the density of the corresponding annual rings in kilograms per cubic meter. The uppermost dashed line represents trees from undergrowth, the lowest from dominant trees and the dashed line in the middle, the trees from middle canopy layer. Note that the undergrowth trees can be very old in uneven-aged forests. Picture and the photos: Riikka Piispanen/Finnish Forest Research Institute

The quality of raw wood from uneven-aged spruce varies a great deal. The assumption has been that it would be denser than normal, but this seems not to be the case.

The properties of Norway spruce from uneven-aged stands (UAS) have been researched in the Erika research project by the Finnish Forest Research Institute. Another objective in the project is to determine the quality of sawn UAS spruce.

“We have researched the properties of the wood and their effect on the quality of sawn timber,” says Ms. Riikka Piispanen, Senior Scientist at the Finnish Forest Research Institute.

The properties of UAS spruce have previously been almost unresearched; still less have there been comparisons between UAS spruce and spruce grown in even-aged stands (EAS). However, the assumption has been that UAS wood is dense and of good quality.

According to Piispanen, it is impossible to summarize the results of this study in one sentence, such as “the quality of UAS spruce is better or worse than that of EAS spruce. However, the main result is that the quality varies and UAS spruce does not have the advantage of being denser.

“The density of UAS spruce varies widely in individual trees as well as between individuals. This variation can be seen in sawn timber as well,” says Piispanen.

”The result is that the sorting of both unsawn wood and sawn timber must be improved. The greatest problems are seen with the strength of the wood,” says Piispanen.

According to Piispanen, this means that spruce stands of uneven age cannot yield large volumes of strong beams and planks needed for load-bearing structures. “On the other hand they produce good material for panels and joinery,” says Piispanen.

The density of wood is one of the most important factors affecting the strength of sawn timber, but another factor is the number of knots in the wood. These result in shape distortions, such as twist or edgewise or flatwise bending, when the timber is dried.

When UAS spruce is sawn into planks and dried, the variations in density create distortions in shape. The effect is most pronounced in planks originating closest to the pith, which is where planks with the largest dimensions and strongest wood are usually derived from.

The Nordic sawn timber quality classification consists of four classes, in which Class A represents the densest and strongest wood. The most prevalent class of the most valuable butt logs from uneven-aged spruce forests is C, though the combined share of Classes A and B is close to 50 percent.

As regards the juvenile wood close the pith, the properties of UAS spruce were closer to those of spruce from naturally regenerated but even-aged forests.

Reason for density variation is simple

UAS spruce also contained more reaction wood than EAS spruce. Reaction wood is anomalous wood produced when, for example, the stem bends under pressure. This happens often in uneven-aged forests and forests with small-diameter clearcuts, especially due to unevenness in canopy height and density and constant changes in the space available to grow.

The third factor leading to quality losses is the number of knots in planks sawn from the pith. There were more knots in UAS butt logs, though they were smaller in size.

The differences in density close to the pith are easy to explain. The trees in uneven-aged forests grow very slowly to begin with – and the growth rate may take incredibly long to accelerate.

”There may be trees one metre in height that are as old as 60 years,” says Mr. Sauli Valkonen, Research Scientist at the Finnish Forest Research Institute. A slow growth rate leads to narrow annual rings and dense wood.

In principle, however, each tree has the same growth potential. It depends on each individual tree when it can begin to use this potential – or whether it ever does so.

“This may happen even after a hundred years, if the growing conditions become more favourable, though recovery may still be very slow,” says Valkonen.

The reason for slow growth may be the suppressing effect of other trees – lack of space and light. In an uneven-aged forest, the position of a tree in relation to other trees has a significant effect on the density of wood.

When suppression is removed, the tree will start to grow, sometimes very quickly. This is why new annual rings around the pith are wider and the wood in them is less dense. The denser annual rings with plenty of knots, however, remain inside the tree.

Research material was of good quality

To research the properties of UAS spruce in southern Finland, six sites were chosen in three municipalities at distances of several hundreds of kilometres from each other: Lapinjärvi, Vesijako in Padasjoki and Suonenjoki. The growth of trees on the sites had been monitored since the beginning of 1990s and prior to that, the sites had been maintained for decades by means of selective logging.

Both butt and top logs were sawn. Their length was 2.5 metres, measured either upwards from the stump or downwards from the point where the top diameter of the tree was 20 centimetres.

All in all, 60 logs were sawn. The cell structures were studied from discs sawn from the trees at a height of 60 centimetres.

According to Piispanen, the picture provided by this material of quality differences between UAS and EAS spruce is the best one available. “Our material is good, and we have gained a useful overview of the matter,” says Piispanen.

Only one reservation must be made: the quality of EAS spruce was measured from logs delivered to sawmill, which means that logs unfit for sawing had already been removed from the material. The UAS material was not sorted in this way. The latter also contained logs destroyed by root rot (Heterobasidion annosum).

“UAS cultivation should not be adopted at all in forests destroyed by root rot,” says Piispanen. However, as she says, while these factors do affect the results, the effect is not significant.

Pine should be researched as well

So far, only spruce has been researched in the Erika research project. Similar research should also be carried on pine. The results might actually be opposite to those concerning spruce.

When young pines grow rapidly, they create thick branches and plenty of juvenile wood of poor quality, especially on rich lands and in sparse stands. The problems can be coped with by a careful choice of growing sites and a sufficient density of stand.

“In addition, competition by large trees keeps the longitudinal growth slow and decreases the number of branches in pine forests of uneven age,” says Valkonen.

Pine is, however, more difficult to grow in stands of uneven age than spruce. “Perhaps you cannot really call it UAS cultivation. It might be better to speak of periodic cultivation where the appearance of a conventional forest is maintained by the existence of large overgrowth trees,” says Valkonen.

In terms of present forestry methods, this could be achieved by fellings followed by natural regeneration with dense seedling tree stands or even by shelterwood fellings. A dense, uneven, young stand would emerge below the overgrowth.

”Growth would obviously not be very rapid, but a better quality would be gained,” thinks Valkonen.
The differences to planted pine stands might be great. “Initially they might grow as if they had lost their mind. The first 20 years might produce very poor wood, and this would weaken the quality of butt logs, which should be the most valuable part of a pine,” says Valkonen.

Valkonen believes that researching this would be a good idea; nor has it been dismissed by wood-using industries, either.