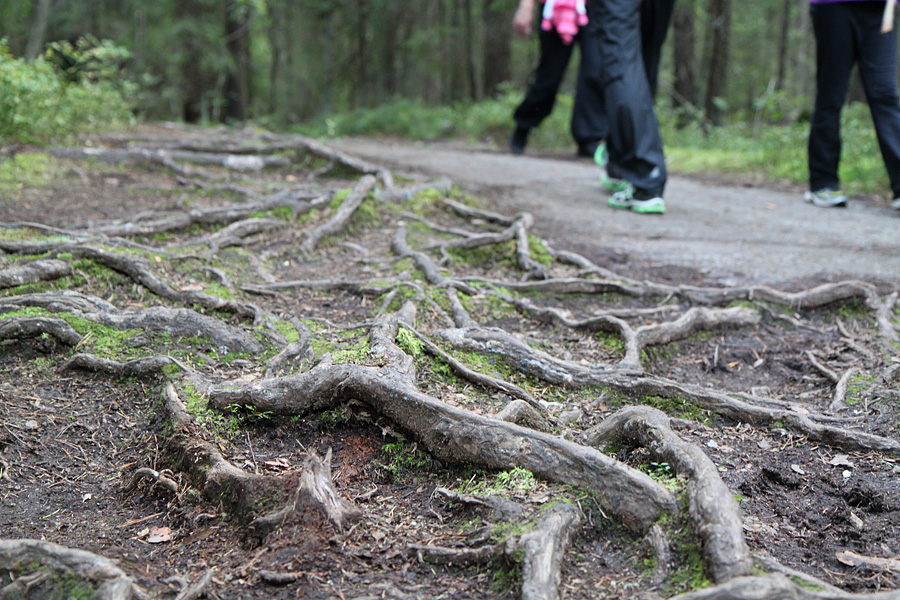 The photo shows a section of a marked route in Sipoonkorpi. These paths suffer a lot of use and wear, but directing people to use them keeps nature intact elsewhere. If unofficial paths are formed in the terrain, the disturbance to nature increases.

Orienteers protected nature as well as they could during Jukolan Viesti, but the orienteering relay event still left its traces in the Sipoonkorpi National Park.

”About 5,000 orienteers came through here,” estimates Erkka Ryynänen, Environment Manager for Valio-Jukola, as this year’s Jukolan Viesti orienteering relay event was called. We are at one of the busiest checkpoints in Sipoonkorpi National Park, situated just 20 kilometres from the centre of Helsinki.

The ground in the pine-dominated forest is trampled and paths have been formed in it. The bark of some roots near the surface is broken, but otherwise there is no visible damage to the trees. Ryynänen is satisfied with the condition of the place.

I’m taking a walk in Sipoonkorpi with Ryynänen, checking the places which have suffered most during the orienteering relay event. Taking care of the environment and respecting it is always important to orienteers, but it was especially challenging to plan an event so as to take account of the nature in a national park.

National Park is an unusual venue

The planning of the Valio-Jukola competition was well underway when the Sipoonkorpi National Park was established last year. Usually, Jukolan Viesti takes place in commercial forests.

Valio-Jukola, which took place in mid-June, drew a record number of participants, nearly 17,000. These numbers were further swelled by the organizers and the public and reached 50,000 altogether.

The fact that the venue is practically in the capital region meant that the event attracted a large public, but also that they could use public transport to get there. “Many cycled here, too,” Ryynänen says.

”An event this big can affect environment in various ways. Therefore it pays to put effort into thinking such issues. In Valio-Jukola, taking care of the environment includes many aspects from traffic planning, waste recycling, planning the structures sustainably and planning the orienteering routes, to the cleaning-up afterwards,” Ryynänen says. The organizers were meticulous about removing litter and such from the forest afterwards.

Sensitive areas excluded from use

”Route planning is one aspect of taking nature into account. We think about the location of the checkpoints and the routes the competitors are likely to use,” Ryynänen explains.

Before this, the organizers together with the landowners have determined the areas which the orienteers cannot use. These are marked on the maps and also in the field. Sensitive areas include rocky sites in natural state, peatlands and shores. There are a few Eurasian eagle-owl’s nests in the area, too.

”Route planning was a bit problematic this year as there were so many prohibited areas. It meant that we had less forest available, and those areas inevitably suffered more wear,” Ryynänen says.

Successful route planning for an orienteering relay event means situating the check points so that there are several clear options for getting from A to B. The distances between checkpoints have to vary, too. When there are plenty of prohibited areas, planning all this becomes more difficult.

“Everything was done that could be done”

Ryynänen himself is satisfied with their success in protecting the environment during the competition. He believes that the traces left in the terrain and vegetation will have faded a lot by next summer. Jukola was raced in the same area back in 1995 and according its environmental follow-up report, most of the damaged areas recovered within couple of years. The healing of the lichen on the rocky sites will take the longest.

“We did everything we could,” Ryynänen says.

”The orienteers did all they could to protect nature. I am awestruck by the amount of work they did. Rolls and rolls of yellow tape were used to mark the prohibited areas,” agrees protection biologist Antti Below from Metsähallitus, which manages all national parks in Finland. Still, the event left considerable signs of wear in the national park.

Below says that the timing of the event in early summer with nesting birds and the height of the growing season made things worse. “Places which previously only had five paths now have hundreds.”

How well nature recovers remains to be seen. Some of the peatlands are trampled so the peat itself is visible, but this may even help their recovery. “We have observed that chaffed sphagnum mosses spread back quickly,” Below says.

Below agrees with Ryynänen that the damage likely to last longest is found on boulders and rocky areas. Summer rains have washed away the loosened lichen and soil. They can take long to recover. Another problem will be created if people start to use the new paths formed.

Metsähallitus is following up the recovery of nature in many ways. Certain sites have been photographed before and after the event and new photos will be taken next summer and in five years. Lines have been marked in forests where vegetation is monitored.

“Sports events can be arranged in national parks, but they should be smaller ones and preferably during the autumn,” Below says.