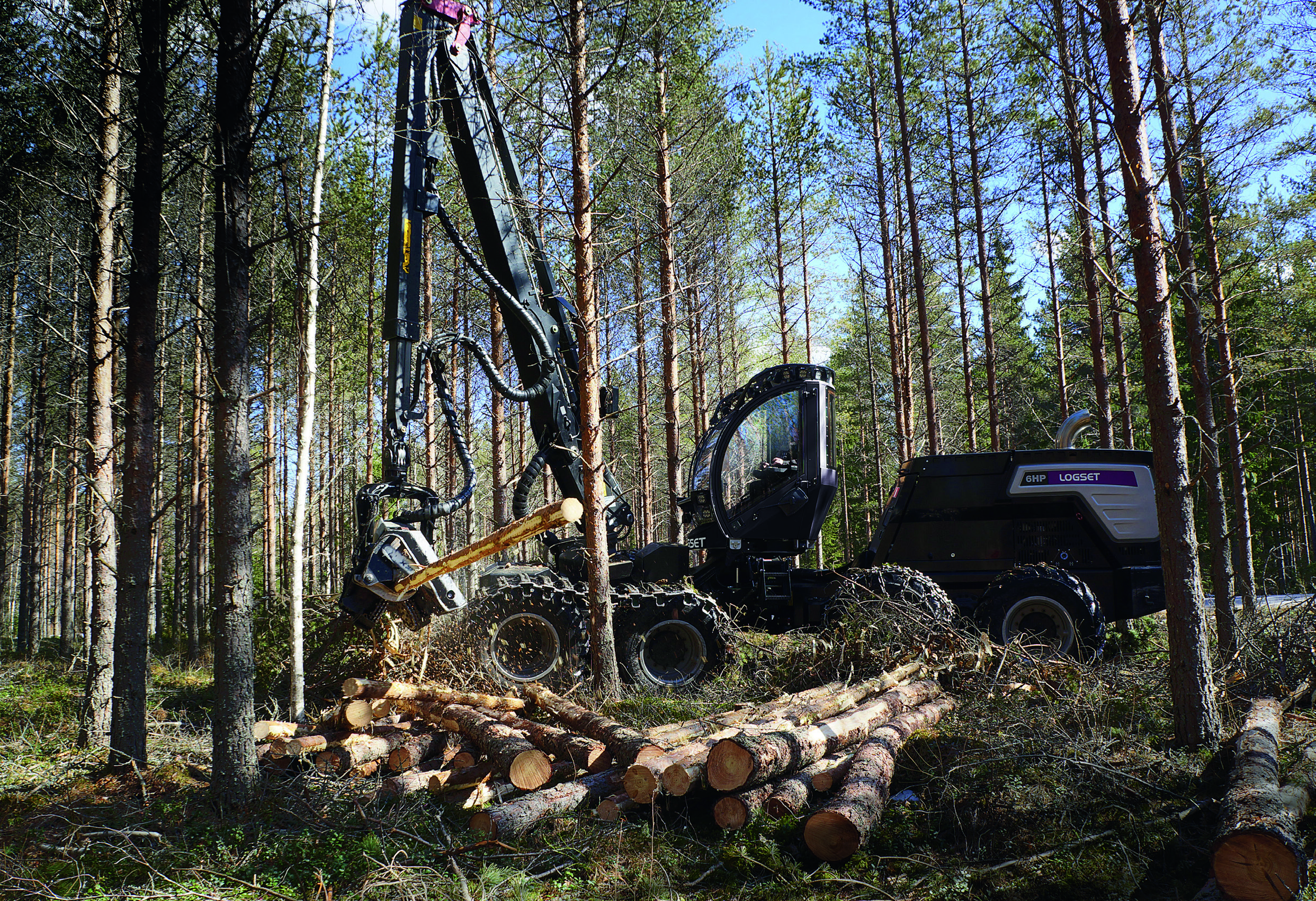 The area of thinnings in Finland is nowadays more than two times as large as the area of regeneration fellings. Photo: Logset

The purpose of intermediate felling is to remove some of the trees in a forest to speed up the growth of the remaining trees into high-quality stout timber, which is the main goal of Finnish forestry. The most popular thinning method is selective thinning, where the trees to be removed are selected one by one in the areas between the strip roads used by the harvester.

The trees to be removed are chosen by the harvester operator. The main aim is to remove trees that are smaller, somehow damaged or of poor quality.

Corridor thinning works in a different way: in it, all trees are removed from corridors that run at right angles from one strip road to another.

In a research project led by Natural Resources Institute Finland, corridor thinning has so far only been tested on young pine stands. The results are promising. As a first thinning, the corridor method is more productive than selective thinning.

The higher productivity is due to the work being easier: there is no need to select which trees to harvest. In addition to this, the average size of the harvested trees is larger in corridor thinning than otherwise.

Corridor thinning has been studied earlier in Sweden, the United States and central Europe. In Finland it was tested in November 2017 in Suonenjoki, central Finland.

The forest in question was a pine-dominated stand which had been well managed, with no natural undergrowth that would hamper the harvesting work. The operation carried out was first thinning and the trees were felled on corridors 1-2 metres wide. The work was done with a normal harvester.

“The result meets the criteria set by the Finnish Forest Centre for good forest management and for the appearance of the area after harvesting,” says Yrjö Nuutinen, research scientist at Natural Resources Institute Finland.

Corridor thinning proved to be faster than the traditional method. The number of cubic metres harvested per hour may be significantly higher than in selective thinning.

“This is due to the fact that, in selective thinning, you need to pay attention to the remaining trees, which makes the work slower. Transferring harvesting residue and moving the harvested lengths also take more time in selective harvesting,” says Nuutinen.

Some growth will be lost, but not much

The Finnish Forest Research Institute, one of the predecessors of the Natural Resources Institute, has previously studied the effects of corridor thinning on forest characteristics. In this study, the structure of the growing stock and growth were monitored for 20 years after the harvesting.

The study showed that the growth loss caused by corridor thinning was not great, in comparison to the traditional harvesting method, but still, there was some loss. Corridor thinning also decreased the average size of the timber stock and length, but even here the difference was small.

This is because in corridor thinning, trees of all sizes are harvested, while in selective thinning mainly smaller trees are removed.

According to Nuutinen, lower harvesting expenses might, however, offset the loss in growth.

A long-term follow-up study will be started

In the future, corridor harvesting will be developed further in the first thinning of a pine-dominated stand in Konnevesi, close to Suonenjoki. The seedling stand has been managed in the same way as the Suonenjoki stand, but in Konnevesi there is undergrowth that will clearly hamper the work.

So far only the actual harvesting has been studied. To decide about taking the new method into use, important issues to be examined include the productivity of timber transport in the forest and the production volume of the stand, especially the volume and quality of stout timber across the whole rotation period.

The research plan includes long-term follow-up studies on the test stands. The effect of corridor thinning on forest growth, biodiversity and quality of the timber stock will be further examined.

The test stands are owned by the forest industry company UPM and the harvesting was carried out by the Varis Forest company using a Ponsse Beaver harvester. The project is financed by the Finnish Forest Foundation and the European Agricultural Fund for Rural Development.

The project is implemented by the Natural Resources Institute, the Finnish Forest Centre and UPM Metsä.

The sources of information presented in this article include the following:

Mäkinen Harri, Isomäki Antti & Hongisto Timo 2006. Effect of half-systematic and systematic thinning on the increment of Scots pine and Norway spruce in Finland. Forestry, Vol. 79, No. 1: 103-121.