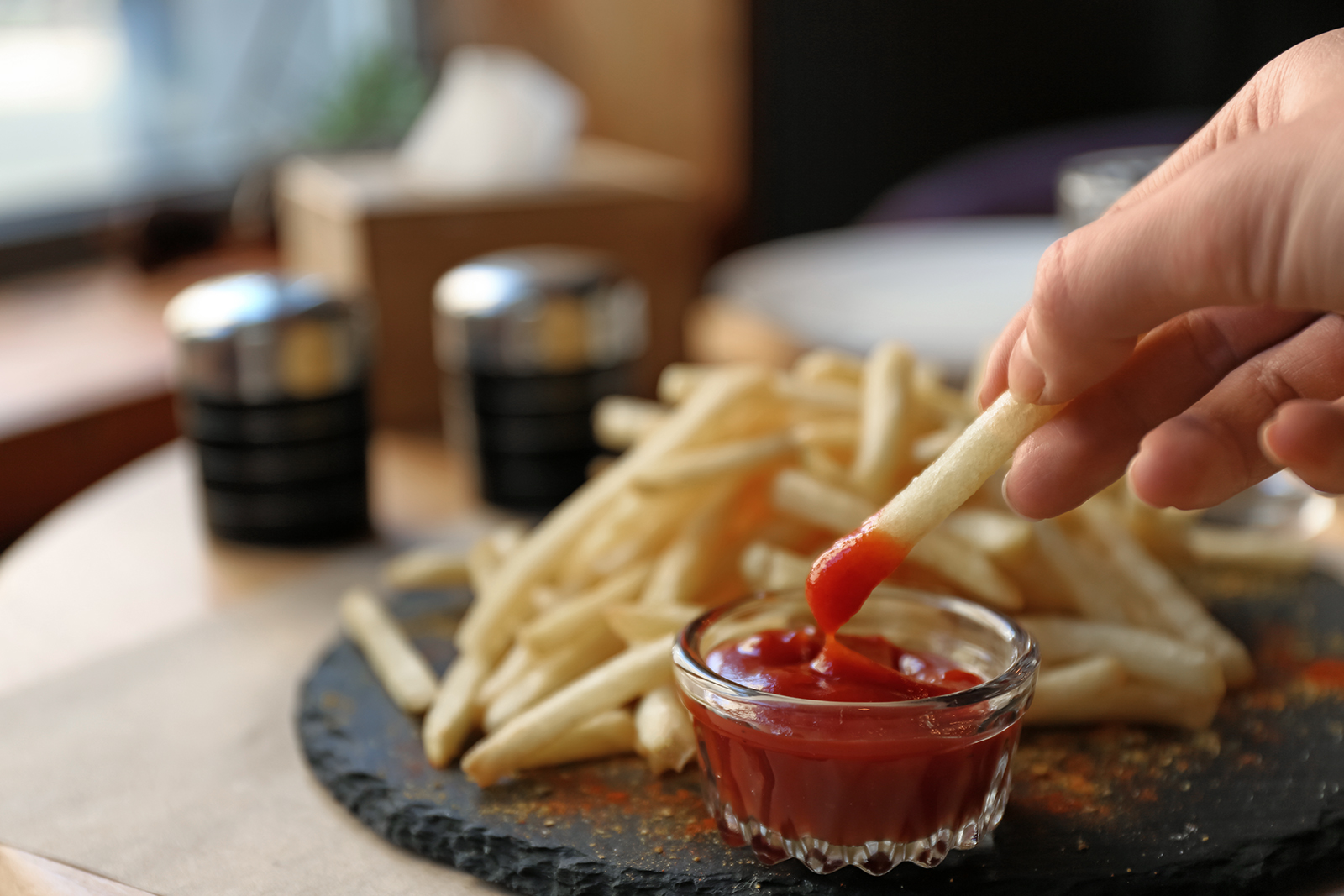 There is cellulose even in the ketchup. Photo: Shutterstock

Carboxymethyl cellulose (CMC) is perhaps the least known product coming from the forest, which is surprising given its significance. It does not normally play the starring role in any product, but it is still needed everywhere.

As we drink our morning yoghurt or decorate our lunch with ketchup, we may mainly be thinking of the taste. What may cross our minds less frequently is that the consistency of a food is an inseparable element of how we experience its taste.

Would the yoghurt taste as good if it was watery, clotted or lumpy? Could we bang the ketchup out of the bottle if its consistency wasn’t always the same?

If your answer is no, you are probably a friend of carboxymethyl cellulose.

Still, few people scan the product labels for the E aliases of carboxymethyl cellulose, such as E 466 and E 468. Some know it by the name cellulose gum. Its best-known name is the abbreviation CMC.

Research Professor Ali Harlin at VTT Technical Research Centre of Finland says that CMC has 700–800 different uses. It is impossible to list them all here, but some are closer to the consumer than others.

It is used in toothpaste, ketchup and mustard because of its effect on the ‘flow characteristics’ of the product. In other words, thanks to CMC toothpaste is fairly stiff when squeezed on to the toothbrush, but when brushing, it spreads on to the teeth and works up a foam.

Ketchup and mustard flow evenly out of the bottle as it is squeezed. CMC also provides consistency and texture for various types of juices.

Another important property of CMC is its ability to retain water. Thanks to this, frozen foods do not develop ice crystals, and baked goods and convenience foods stay fresh longer. It also gives more strength to gluten-free bread.

Thanks to its surface charge properties, adding CMC to laundry detergents prevent dirt from reattaching to the laundry. In pharmaceuticals, such as tablets, CMC is used as a filler to bind the other ingredients together.

CMC helps effervescent tablets to dissolve more rapidly. In soft drinks, CMC prevents dyes from forming a sludge on the can bottom. In wallpaper adhesives CMC has been used since the 1940s, when it replaced potato as the adhesive agent.

In oil drilling, the drill bit is lubricated during the operation with drilling fluid. The consistency of the mud created during drilling can also be optimised with the help of CMC.

In water-soluble latex paints, CMC is used to make the paint easier to spread and to adhere better to the surface, to prevent splatters and drips and to stabilise the paint. In the textile industries CMC has two uses: for sizing the warp to strengthen it and for making the dyes spread evenly when printing.

CMC is used in glazing and coating ceramic tiles. Added to the glazing solution, CMC helps to form an unbroken film on the tile, thus allowing the other ingredients also to spread evenly.

CMC is made of wood pulp. In appearance it is a white powder with a grain size determined according to the purpose of use and purity. Finer qualities may resemble potato starch, while coarser ones may look like semolina.

CMC comes in three grades: technical CMC for industrial use, purified, low-salt CMC and highly purified  CMC that can be used for foodstuffs and similar products. Unlike technical CMC, purified CMC is treated with a mixture of alcohol and water to remove impurities.

CMC is completely disintegrated when composted, for example. It is non-toxic and reasonably priced, making it a suitable ingredient for foods. That it is safe to use is revealed by the fact that its maximum allowable daily intake has not been officially determined anywhere.

Äänekoski, Finland is the biggest in the world

When a food label includes the code E 466, the ingredient can probably be traced back to Äänekoski in Central Finland, where the production of CMC began in 1944 at Wärtsilä-Selluloosa Oy’s mill. The mill was later acquired by the US company CP Kelco.

The plant now located in Äänekoski next to the Metsä Fibre pulp mill is the world’s largest CMC plant. Its biggest expansion occurred in the 1980s, when the paper industry began using CMC for coating paper.

The Äänekoski plant employs a 30-person research team, and new applications are developed frequently, such as the brand-new, CMC-based greaseproofing for food packaging. Products of this type are used in pizza cartons and their health risks have been widely discussed.

Earlier, greaseproofing was achieved using hydrofluorocarbons, but their use has been restricted or even prohibited in several countries. With CP Kelco’s bio-based and biodegradable greaseproofing agent, paper and paperboard can be coated using conventional technologies.

“What is more, it is a safe product for both manufacturers and consumers,” says Jaana Ahtikari, Global Marketing Manager (CMC) at CP Kelco.

CMC is found in almost all paper grades

In Central Finland, CP Kelco has been an important and steady employer for long. CMC is not produced by anyone else in Finland, but globally there are plants in Europe, the United States and China, at least.

The share of products for the food industry of CP Kelco’s production is about one tenth. The total global production of CMC is over 400,000 metric tons a year.

The paper industry uses CMC as a binding and coating agent and for sizing, to ensure that the coatings and sizes used for breakfast cereal cartons and the like are spread evenly.

CMC is also used at the wet end of paper machines – that is, at the start of the process, where the mixture of pulp and water is led to the machine. Among other things, CMC improves the strength of the paper and helps to achieve a good shape.

“In fact, the only paper grades for which CMC is not used extensively are toilet paper, newsprint and, among paperboards, uncoated liners and fluting,” says Ahtikari.