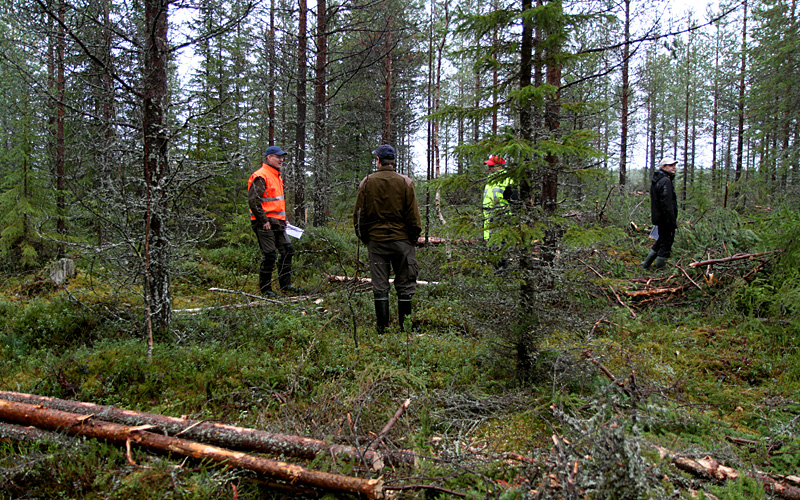 Monitoring compliance with certification criteria means field trips and deskwork. Compliance with criteria in effect since beginning of 2011 is being inspected currently.

The City of Rovaniemi is rainy and grey on this October morning. According to my taxi driver, there has been no snow so far this fall and the “day won’t get much lighter than this”. Great outdoors weather, then.

A group of men are seated around a table at the Metsäliitto offices. An audit of the PEFC certification is about to start. The purpose is to verify that the requirements of the certification are being carried out in practice.

These audits are carried out once a year and involve an assessment of all the operators who have committed themselves to the certification system. In this case, the audit concerns the operations of Metsäliitto in Lapland.

Also present is Pekka Saikkonen, Regional Manager for the Regional Forest Owners Union of Northern Finland, as the owner of the certificate.

The PEFC certificate in Finland is a regional group certificate. Each of the hundreds of thousands of forest owners does not have to apply individually for a certificate. The application has been submitted collectively via the Regional Forest Owners Union in question, explains Saikkonen.

”During the morning, we’ll go through the bureaucracy, which means contracts, instructions and instruction practices. The aim is to ensure that everything is carried out according to the law and the certification requirements,” Ilomäki says. “In the afternoon we’ll check sites to verify that practice and instructions match,” he continues.

The review during the morning includes Metsäliitto’s IT systems, contractors and their contracts, arrangements for occupational health care, work instructions and quality criteria, briefing of new contractors, training, felling site information and how it is transmitted, the definition of felling site boundaries and the marking of valuable natural habitats on maps.

“There are 45 harvester and forwarder teams, which have all in all 120 drivers, carrying out fellings in the Kemi district alone. The mode of operation has to be consistent,” Mäkinen explains the need for training.

”It is really difficult to measure the effectiveness of training. We believe that this helps us avoid mistakes at the fellings sites,” Romakkaniemi adds.

When Ilomäki has got all the information he requires, the group moves on to the forest. During the afternoon five arbitrarily chosen sites will be visited: a clear felling area, a thinning, an on-going felling and an energy wood harvesting site. The fifth site is one where a felling is planned but has not been started yet.

Romakkaniemi prints out the documents and maps related to the sites to be visited.

“I’m not nervous. The people working for us are skilled enough that the felling sites can be visited any time. We pay special attention to what the site looks like after we’re gone,” Mäkinen says.

The rain is worse every time we leave the cars at a new site. At every site, the group goes through the plans, actions taken and the results.

At the site currently being felled Ilomäki speaks with the entrepreneur, Mr. Joni Saariniemi from Veljekset Saariniemi Oy, and checks his instructions, maps and safety arrangements. All things and equipment are in order in Saariniemi’s harvester.

The planned felling site generates the most discussion, as it is bisected by a brook. “The owner thinks that the forest needs something done to it. I think the brook is not in a natural state, so it’s not protected by the Forest Act as a valuable habitat,” says Halvari.

Feedback at every site

The auditor agrees with Halvari. The brook has been cleared at some point, so that neither the streambed nor the forest surrounding it is in a natural state.

“The certification or the Forest Act does not require special actions here. Water conservation has to be taken care of, of course,” Ilomäki says. “In places like this there’s nothing against carrying out forest owner’s wishes”.

The brook could also be treated as a valuable habitat as defined in the Forest Act. Saving the forest bordering on brooks increases biodiversity in commercial forests, the banks are good locations for leaving retention trees and the brook itself is important to wildlife, too.

After talking things over, the men agree on what should be done. A thinning will be carried out in the forest, but the harvester will stop at ten meters to the brook. Some trees can be thinned next to the brook, but the goal is to maintain the brook in its current state.

Ilomäki provides immediate feedback at every site visited. The quality of the work meets the certification requirements, in some cases to an excellent degree. “These felling sites won’t show up as deviations in my report.”

All the eight Regional Forest Owners Unions in Finland will receive a report on the audit findings in their areas. The reports list all sites or actions which deviate from the certification requirements. These lead to immediate corrective action.

The audit is over, and the cars head back to downtown Rovaniemi. The rain stops.

PEFC General Assembly in Finland – a first for a Nordic country