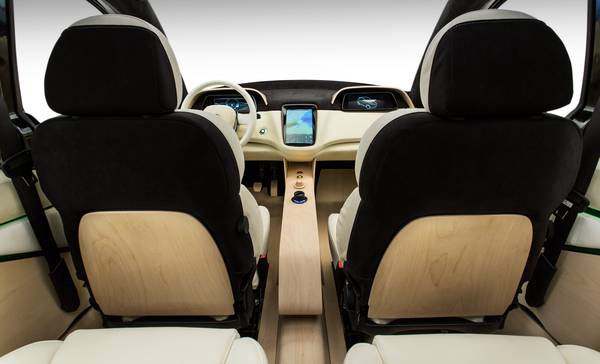 Forest industry company UPM has developed a Biofore concept car, where the proportion in the use of biomaterials is as high as possible instead of traditional ones. Such biomaterials include UPM Grada plywood and UPM Formi biocomposites. The concept car was constructed by students at Metropolia University of Applied Sciences in Helsinki, Finland.

Most of the plastic materials used in cars were substituted by biomaterials in the consept car. 15 percent of the car’s weight consist of biomaterials and it also weighs 15 percent less than an ordinary car.

The cabin floor, console, curved covers of dashboard and door panels are made of UPM Grada plywood. It can be thermomechanically freely formed after production. UPM Grada is produced of birch veneer. Mask in the fore and side and cabin panels are made from UPM Formi, raw materials of which are wood fibre and plastics. Stickers of UPM Raflatac are used in the car as well.

Biofore concept car has a diesel engine. This is why UPM:s renewable, wood-based BioVerno diesel can be used as fuel in the car.