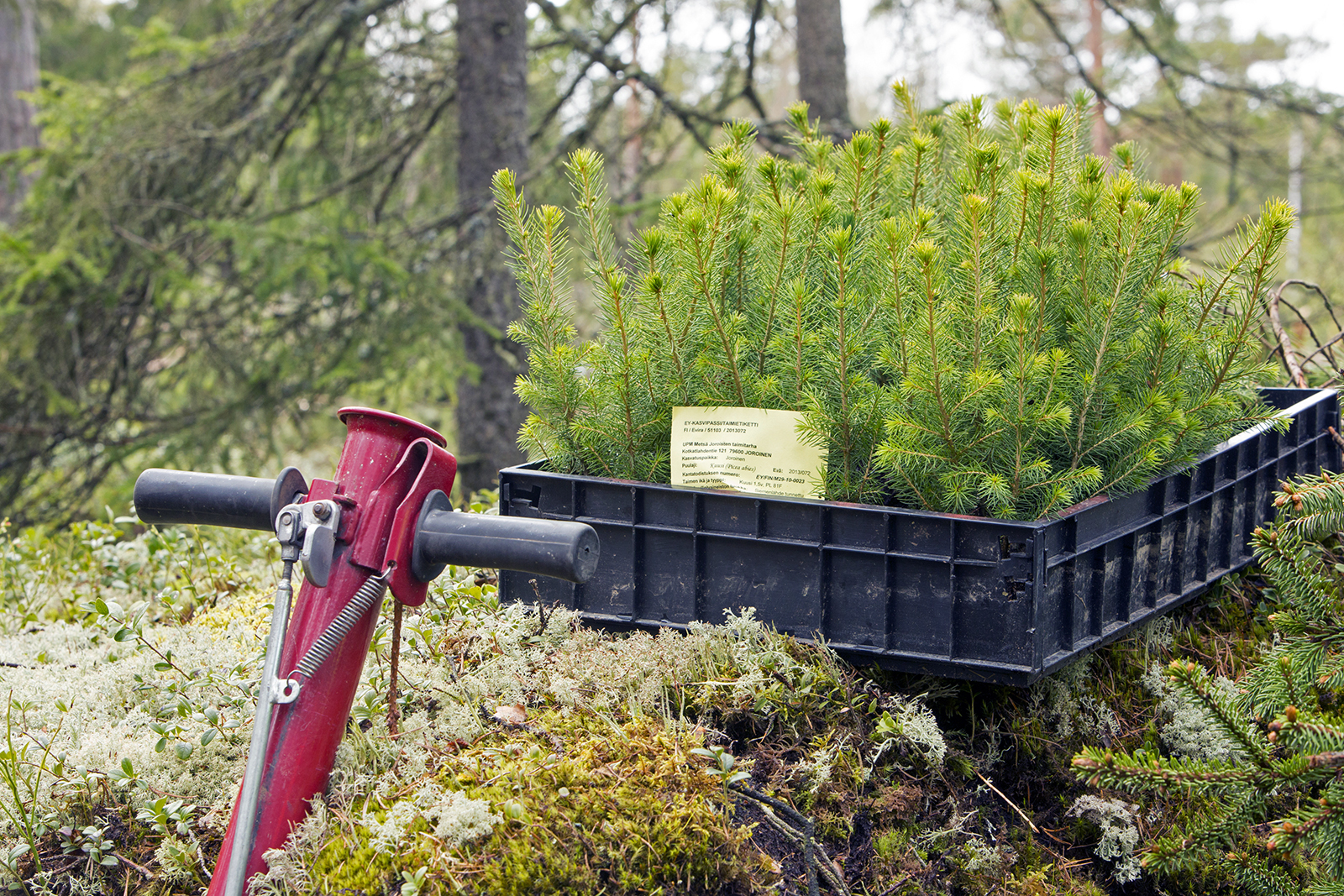 Simply increasing fertilization would enable Finnish forestry to increase its carbon sinks by an amount equalling the emissions from passenger cars in Finland. Other effective means of increasing forest carbon sinks are soil manipulation, choosing the appropriate method of silviculture, effective management of seedling stands and the genetic improvement of trees.

According to a recent study by Natural Resources Institute Finland, appropriate management of seedling stands could increase the growth of stemwood by six million cubic metres over the next hundred years. As the growth mainly occurs in the raw material of long-term wood products, that is, logwood, seedling stand management would also bring greater revenues to the forest owner.

Compared to current figures, timber sales revenues would increase by two thousand million euros over the next hundred years. On the other hand, the cost of forestry operations would increase by about 0.6 thousand million euros. Senior Scientist Saija Huuskonen says that ‘in the long term, investing one euro in seedling stand management will bring an average increase of three euros in stumpage revenue.’

In this scenario, the more intensive management methods would consist of early clearing and thinning according to the recommendations for good forestry, on sites selected on the basis of the dominant species, growth site and location of stand. Early clearing would involve removing the seedlings of incidental species before they enter the stage of strong growth.

For assessing the sales revenue and cost of forestry operations the researchers used the average prices for the whole of Finland for 2002–2016. The effect of timber supply on prices was not taken into account.

Researchers at Natural Resources Institute Finland note that seedling stand management could be considerably improved. Only just over one half of the need for seedling stand management, as defined in the recommendations for good forestry, is met in the country as a whole. According to the results of the 12th national forest inventory, the area of seedling stands where forestry operations are overdue is more than 700,000 hectares.

Genetic improvement can increase yield by one fifth

Using genetically improved seeds and seedlings makes sense for the forest owner. ‘That is the easiest, cheapest and most natural way of increasing the binding of carbon. At the same time, forestry will give a better yield,’ says Matti Haapanen, Senior Researcher at Natural Resources Institute Finland.

Haapanen says that the genetic improvement of conifers has increased the yield of stemwood by 10–20 percent over the growth cycle, depending on the degree of breeding of the seeds. Here, the comparison was between pine stands established with improved seeds or seedlings and pine stands from ordinary seeds.

“It is evident that improvement by breeding increased the capacity of binding carbon considerably,” says Haapanen. He goes on to say that the latest technologies, especially the production of spruce seedlings for cultivation by means of vegetative propagation, will continue to improve the capacity of carbon binding.

At the moment breeders are testing and selecting the second-, or even third-generation descendants of what are called ‘plus trees’, the best trees originally selected from ordinary forests. The benefits of breeding increase with every generation.

Fertilization is the most effective way of mitigating climate change

Fertilization can be used to boost growth – in other words, to increase the carbon sink. Fertilization can also be used to improve tree health by correcting nutrient imbalances in the soil so as to prevent growth disturbances, such as forked tops, excessive branching and abnormal growth of the stem.

On mineral soils this would mean that pine and spruce stands of the bilberry and lingonberry types, which respond best to growth fertilization, would be fertilized every ten years, while peatlands would be fertilized with ash every 25 years. The area fertilized annually would be about half a percent of Finland’s forest area, or 120,000 hectares.

Furthermore, fertilizing seedling stands and young forests to improve their health would boost growth. Studies show that fertilization does not have a long-term effect on berry or mushroom crops.

The best fertilizer from the viewpoint of circular economy is plain wood ash. It contains all the nutrients needed by trees in practically ideal proportions. Yet only a small share of ash from power plants that is suitable for fertilization is actually used for the purpose.

As the number of trees on peatlands increases, they take up and evaporate more water from the soil. This decreases the need for repair ditching, which in turn helps to protect waterways. More broadleaved trees will also appear on ditched mires, which will support biodiversity.

During the peak years of forest fertilization, in 1965–1975, the maximum area treated annually was about 240,000 hectares. The area has since dwindled, chiefly for environmental reasons: it is feared that the fertilizers are leached into the waterways.

There are fairly few studies on the leaching of fertilizers from mineral soils.  What is known is that the leaching is the greatest during the first two years.

If the stands to be fertilized are selected carefully, no more than one tenth of a nitrogenous fertilizer may be leached. Forest certification requires quite extensive buffer zones around waterways – the FSC requirement is up to 50 metres – and they have decreased leaching. On the other hand, no fertilization is currently recommended for areas such as fairly poor mires, for financial and environmental reasons.

Fertilizers, too, have improved. On peatlands, for example, a well-established product contains not only ash, but also iron, which causes phosphorus to dissolve more slowly. This has significantly decreased the leaching of phosphorus into meltwater in spring, for example.

In recent years the areas under fertilization have begun to increase. The current extent is about 60,000 hectares per year, of which somewhat over 45,000 hectares are fertilized to boost growth.

Breaking and manipulating the ground before planting new seedlings gives a good boost to the new tree generation and helps the initial growth. According to a Swedish study, soil manipulation adds to the forest carbon storage almost 25 metric tons per hectare in 25 years.

The effect on forest growth can be seen for decades. Manipulation is financially profitable, and on mesic heath forests the annual return on manipulation up to the following regeneration felling is about 3.5 percent.

According to Research Professor Hannu Ilvesniemi at Natural Resources Institute Finland, soil manipulation is one of the key factors that have enabled the growth and carbon sink of Finnish forests to approximately double in size in the course of the past 60 years.

As regards regeneration sites on peatlands, the situation is more complicated than on mineral soils, since regeneration fellings cause the soil water table to rise. Because of this, lack of oxygen in the soil becomes more common, which may hamper root growth and also increase emissions to waterways and the air.

Nevertheless, trees in vigorous growth form a significant carbon sink even on peatlands. The carbon storage in peat is substantial, however, and changes in its size in whichever direction cannot be detected with current methods.

Soil manipulation also brings other benefits. It lessens the compaction of soil, raises the temperature of the growth site, increases the availability of nutrients accessible to plants and decreases competition with surface vegetation and damage to seeds and seedlings.

Soil manipulation also makes it easier to plant the seedlings. Similarly, regeneration by sowing is easier when the seeds do not vanish among the undergrowth.

In 2014, Pellervo Economic Research PTT made a study of existing forest research to clarify which is considered better, continuous-cover or clear-cutting forestry. The outcome was that there is no clear-cut answer, nor can there be.

Since then, plenty more data has accumulated on the various methods of silviculture, but one thing remains the same: the profitability of different silvicultural methods can only be compared for individual stands, as there is so much variation in so many conditions. The main variables are the site characteristics, the trees growing in the stand and the forest owner’s aims – such as the owner’s definition of profitability.

Nevertheless, something can be said on the topic. Researcher Sauli Valkonen at Natural Resources Institute Finland says that in spruce stands in southern Finland, the yields from continuous-cover silviculture are one fifth smaller at the outset than from clear-cutting. Also, the growth of the tree stocks correlates directly with the size of the carbon sink.

One factor explaining this difference is that many forest management innovations, such as the genetic improvement of seeds and seedlings, are not used in continuous-cover silviculture.