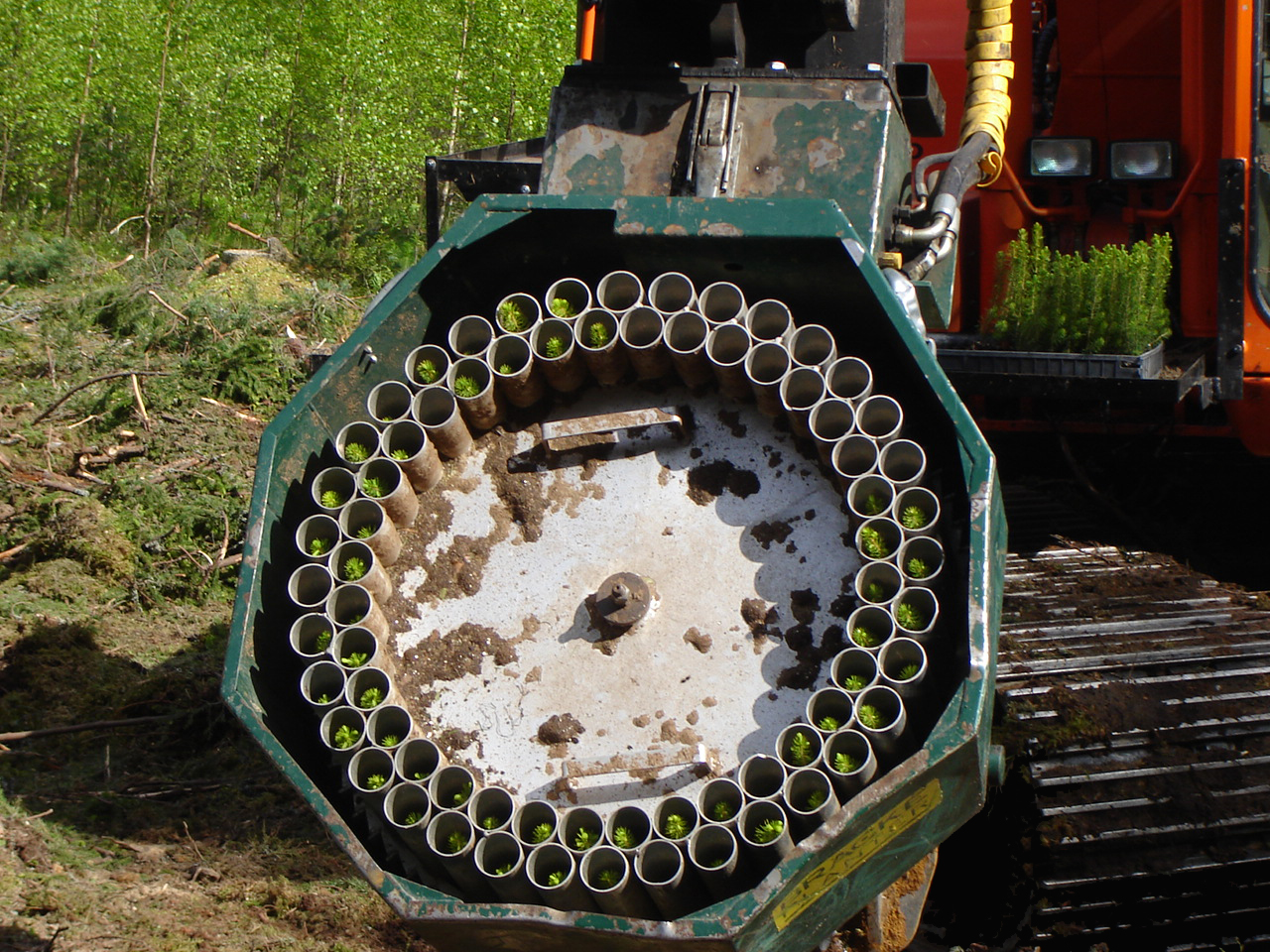 Planting machine driven by an excavator. Putting the plants into the machine is the most time-consuming phase of the work. Photo: Hannes Mäntyranta

When the soil surface is prepared after regeneration felling for new trees to grow, the new tree generation germinates and starts to grow quickly. Simultaneously, logging residues increase the carbon storage of soil.

Over a longer period of time, soil preparation improves forest growth and helps to increase the carbon storage in the trees. Carbon storage increases in the soil as well, but the change is difficult to monitor because the size of soil storage varies so much from one point to another.

According to a recent Swedish study, the increase of forest carbon storage due to soil preparation may be as high as 25 tonnes per hectare in 25 years.

’We have managed to double forest growth and forest carbon storage in 60 years in Finland. Soil preparation has been one of the key elements in this development,’ says Hannu Ilvesniemi, Research Professor at Natural Resources Institute Finland.

Compared to mineral soils, the situation is more complicated on peatlands, because regeneration felling causes the groundwater level in the soil to rise. This leads to a lack of oxygen in the soil, which may harm the growth of tree roots and increase emissions to waterways and to the atmosphere.

Forest stock with abundant growth is a significant carbon sink also on peatlands. The carbon storage of peat is, however, so large that any changes in it in one direction or another are difficult to observe with current methods.

This is why the methods of harvesting and soil preparation must be carefully chosen on peatlands. Ensuring appropriate hydrology is of particular importance.

Natural Resources Institute has compiled a review of what research in general knows about the effects of soil preparation on forest regeneration, waterways and the ecological and social sustainability of forest use. The effects are positive in many ways.

Soil preparation decreases soil compaction, increases growing site temperatures and access to nutrients and decreases competition with undergrowth as well as seedling and seed damage. Due to this, the seedling has better chances of early survival and growth than on unprepared soil.

The effects of soil preparation on forest growth are visible for decades. Soil preparation is a profitable measure with an annual return of about 3.5 percent until the end of rotation period on fertile heath lands.

Seedlings are easier to plant after soil preparation. Sowing is also easier, because the seeds do not disappear in the undergrowth.

’As a matter of fact, sowing without soil preparation is more or less useless,’ says Ilvesniemi. ’Even in natural conditions trees do not germinate if the soil surface is not broken in any way. According to current information, soil preparation also enhances germination in continuous-cover silviculture.’

In mounding, a hole reaching to the mineral soil is scooped with an excavator or a hoe and the soil is dropped upside down next to the hole. The seedling is then planted on top of this mound.

In patch mounding the soil is dropped upside down into the hole that it was taken from.

As the mound is higher than its surroundings, the seedling will stay dry and the growing site is warmer than the surroundings. The bare soil is a deterrent to the pine weevil, and the humus inside the mound decays slowly, providing nutrients for the seedling.

According to Ilvesniemi, mounding also makes it easier to safeguard features important for ecology. ’Harming retention tree groups, key biotopes and decayed wood on the ground is easier to avoid,’ says Ilvesniemi.

Mounding is appropriate on fertile lands, where regeneration is almost always carried out by planting. On poorer lands, harrowing is suitable for both planting and sowing.

In harrowing, the soil surface is turned to create shallow furrows, into which the new trees are planted or sown.

Disadvantages are prevented by careful work

Soil preparation may be harmful to landscape, recreational values or waterways. This can be prevented by careful work, such as using methods as light as possible and only breaking  the soil surface when necessary.

Prepared mineral soil releases more nutrients into waterways than an unprepared one, but the washout rate is low, because soil and vegetation adsorb it. Soil preparation may harm the woody stems of berry species, for example, but in general, vegetation recovers well after preparation.

On peatlands, the amount of nutrients and organic substances in the washout is many times greater than in that from mineral lands. Here, however, the effect on waterways can be decreased by buffer zones around waterways.