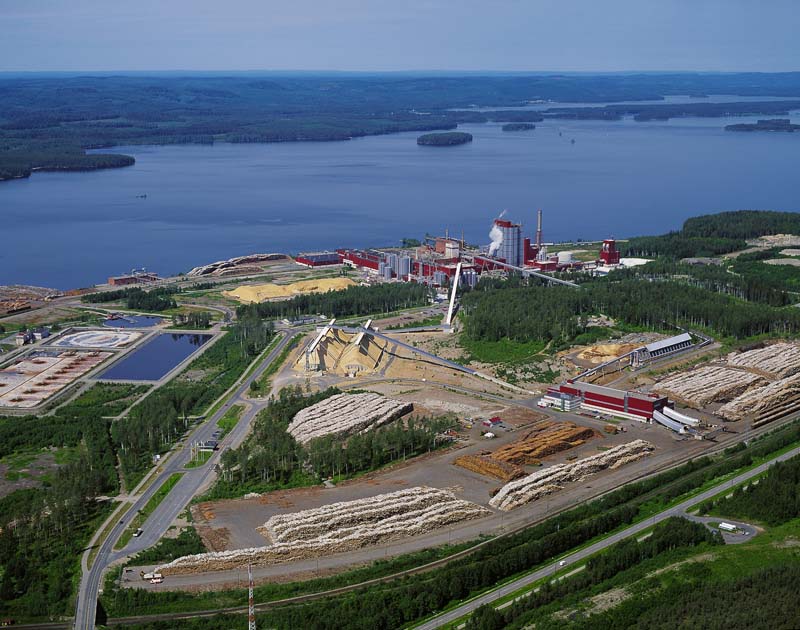 Since last summer, Stora Enso has been producing dissolving pulp at its Uimaharju plant, and has had no problems with either sales or prices.

It was summer 2012 when Enocell, a subsidiary of Stora Enso, started the test production of dissolving pulp at its Uimaharju plant in Joensuu, eastern Finland. The reason comes as no surprise: ”When the demand of paper started to decrease, we faced the question of where to find substituting production that could also create income,” says Ms. Sirpa Välimaa, TCS (Technical Client Service) Manager of Stora Enso’s dissolving pulp production.

The Uimaharju plant had two pulp lines with a combined annual capacity of 450,000 tons. The smaller, 150,000-ton one was reconfigured for dissolving pulp production.

The test runs started in January 2012 and after the third one, continuous production was started. The whole output of the line goes to textile production in Asia.

The market price of dissolving pulp is clearly higher that that of conventional pulp, though that, too, is very profitable these days. The demand is predicted to remain good, because population growth means more need for clothing.

In 2012, there were 34 producers of dissolving pulp in the world, with a total production of 5.7 million tons. This corresponded to nearly six per cent of the world’s fibre demand, while the share of cotton was one third, and the rest was covered by oil-based fibres.

It is estimated that the share of cotton will decrease to a quarter before 2030. ”According to estimates, the market will face a severe fibre shortage by 2030 at the latest. The competition is also heavy, but we have entered this market in order to stay,” says Välimaa.

Already this year the production capacity of dissolving pulp is estimated to rise by 1.25 million tons.

On the other hand, the production potential of the competitors of wood as a raw material of dissolving pulp – that is, cotton and oil-based polyester – is getting smaller and smaller.

The problem with cotton is that it is produced on arable land, which is desperately needed for food production. According to estimates by the Department of Agriculture of the US, the USDA, the world’s arable land area will decrease by 18 per cent from 2010 to 2050, while the demand for food will increase simultaneously by 85 per cent – then again, the demand for fibres will increase by 112 per cent.

The potential related to this can be described by the 15 million cubic metres of wood by which Finland could increase its annual loggings without exceeding the limits of sustainability. If all this wood was used to make dissolving pulp, 15 million people could be fed with crops from the arable land that could be freed for food production as a result.

But what is dissolving pulp? Välimaa starts by telling that pulp is produced by boiling wood chips in chemicals. ”When the result is washed and dried, we get pulp. Pulp consists of cellulose and hemicellulose, but if we treat it with highly acidic solvents, the hemicellulose will be dissolved and only cellulose will be left,” says Välimaa.

In textile industry, dissolving pulp will still undergo a very complicated chemical process resulting in fuzz that resembles cotton lint, which is then spun into thread.

Dissolving pulp can be made from all tree species. At Uimaharju they chose birch, mainly because there is plenty of birch in eastern Finland and, if that is not enough, more can be imported from the Russian Federation, where birch has no industrial use. Birch also gives a higher yield than softwood because of being denser.

In addition to this, some products are better if they are made of birch. Some of us still remember the rayon shirts in the 1960s, which acquired a yellowish tinge over time. This was because the raw material was softwood, but with birch, this problem does not exist.

In addition to these species, dissolving pulp is also made of eucalyptus.

The range of end products of dissolving pulp is astonishing. In textile production, it has superior advantages. For example, it is the only material that can be made into completely recyclable textiles.

The fibres made of dissolving pulp are rayon, viscose and modal. In addition to being used for industrial textiles and garments, these fibres can be used as raw material for tablecloths, curtains, or even sausage casings.

Acetate is a dissolving pulp product of a higher quality. It is used to manufacture non-discolouring frames for sunglasses and cellophane, used for wrapping flowers, for example. As an example, the red wrap of the small Babybel Gouda cheese is made of acetate based on dissolving pulp.

”But how will you know whether the dissolving pulp used in an acetate material is made of wood,” asks Välimaa, and answers: ”If you crush it and it does not return to its previous form, it is made of wood.”

Acetate has characteristics that are called rheological. This means that it can be used to create structure for many products. The structure of such products as hair conditioners, styling mousses and toothpastes is often the result of acetate based on dissolving pulp.

Dissolving pulp is a raw material of numerous food additives, such as the E-additives 460–469, with the exception of E462. These are mainly different kinds of celluloses, used as fillers in diet products and fibre-rich breads, as well as to emulsify, stabilize, thicken or jellify fruit cakes, bottled sauces, ice creams, cream products and, say, cheesecakes.

Dissolving pulp is also used as coating and filler for pharmaceuticals.

Although the competitors of wood do have their advantages, wood still beats them almost everywhere. For example, polyester is easy to modify, but a cloth made of polyester is unpleasant to use because it does not breathe. Cotton, on the other hand, absorbs moisture but does not release it.

In contrast, viscose based on dissolving pulp breathes, which is why it has practically cornered the markets in hot Asian countries.

The quality of cotton also varies, which is why you have to adjust the production process continuously. And it is not completely colourfast, again in contrast to viscose.

Viscose is soft, has a high and rapid capability of absorption, is more modifiable than its competitors, has a very consistent quality and its environmental burden is very small. Its productivity is some 20 per cent higher than its competitors’ and in spinning, its waste percentage is two, while for cotton, for example, it is 12.

The only problem is the price. ”But we believe that the price will get lower when people understand how wood-based fibres can help solve the problems created by population growth and the decrease of arable land,” says Välimaa.