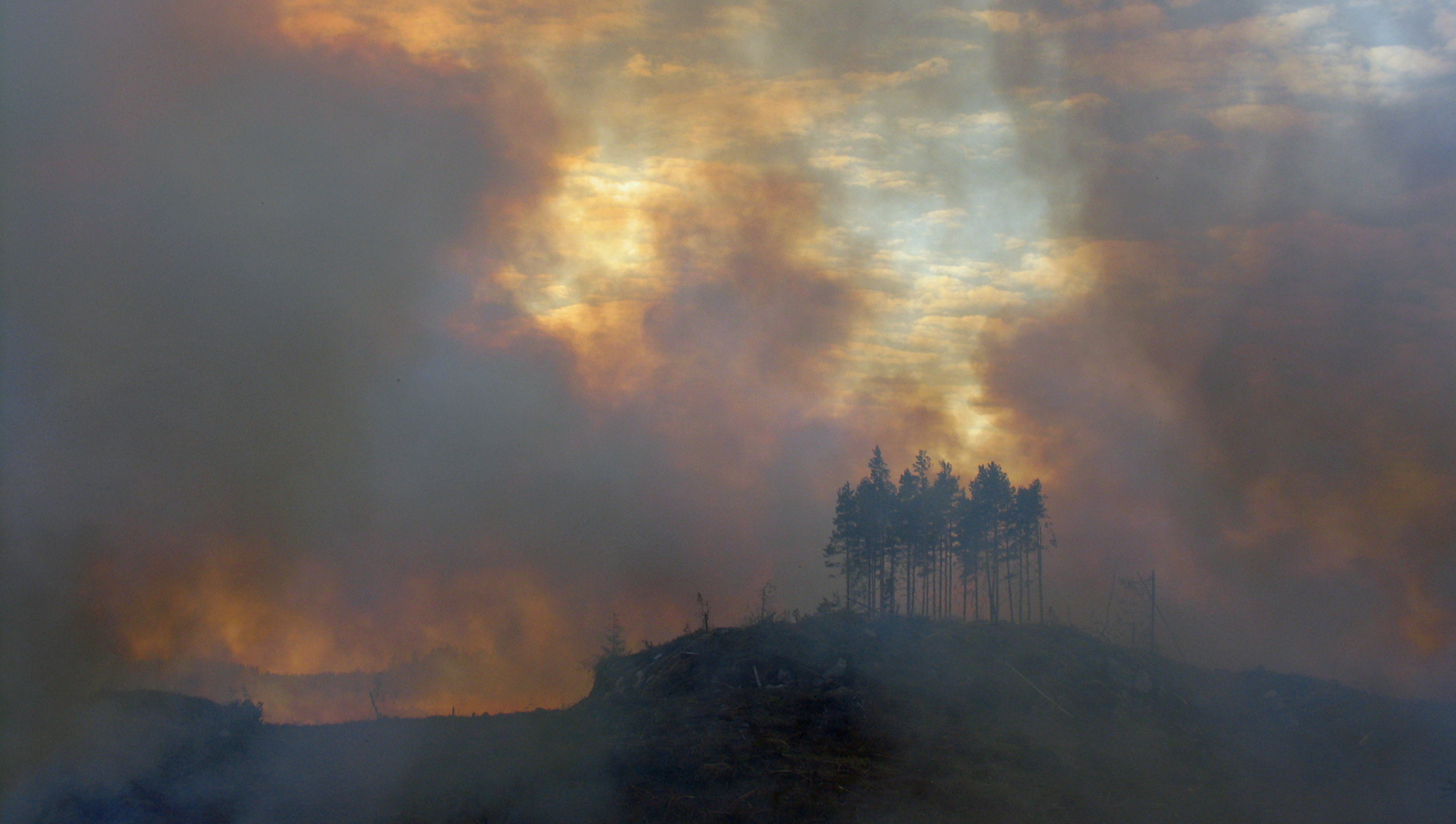 Every year, fewer than one thousand of the 26 million forest hectares in Finland burn down in wildfires. Photo: Henrik Lindberg

Nowadays the term ‘climate change’ is almost always equated with global warming due to human activity, as the amount of atmospheric greenhouse gases is increasing and the climate is thus continuously warming. The main cause of this is carbon dioxide, which is always released when substances containing carbon are burned.

The greenhouse effect refers to the phenomenon that the atmosphere stops some of Sun’s radiation reflected by Earth and re-reflects some of it back on to Earth. This has the effect of warming Earth’s climate. The phenomenon is indispensable for life on Earth as we experience it, for without it, Earth would be considerably colder.

Atmospheric gases which bind and reflect heat are called greenhouse gases. The most abundant of these is carbon dioxide. Thus, carbon dioxide is not a pollutant, but something naturally found in the atmosphere.

There are many ways that the climate can change. There is widespread agreement across the scientific community about the climate changing because of humans. Yet it is equally obvious that human activity is not the only factor affecting climate or climate change, and so far we have not completely understood the part played by humans in climate change.

In principle, burning vegetation is carbon-neutral

Forests and forestry are involved in the natural carbon cycle in many ways. Atmospheric carbon is bound by all forest plants as they grow. At the same time, the carbon sink in the soil also increases. When carbon is being bound in this way in a storage away from the atmosphere, the storage is called a carbon sink.

Carbon is released from a carbon storage when plants or products made of them, such as wooden furniture, disintegrate either through natural decay or by being burned. Soil carbon also decreases as the result of loggings.

Since the growth of forests decreases the amount of atmospheric carbon, one can conclude that forests work to combat climate change. On the other hand, carbon is always released from forests when forest organisms die for whatever reason. This means that forests can only act as carbon sinks if the amount of carbon released from them is smaller than that bound by the growth of plants.

Climate change is intensified by carbon which is brought into the natural carbon cycle from outside it. With the progress of industrialisation, such carbon has been injected above all by the use, or burning, of fossil fuels – coal, oil and natural gas – in energy production and transportation.

Then again, the use of biofuels – which means plants or fuels made of plants – does not intensify the greenhouse effect, although burning them releases exactly the same kind of carbon dioxide as the burning of fossil fuels. It is said that using biofuels – such as forest – for energy production is neutral as regards climate change, because the carbon released by the burning will be bound by growing plants.

According to the latest research, forests also curb climate change in that when growing, they produce particles which reflect some of Sun’s radiation back into the space. In Finland this effect may be equal to as much as one quarter of the use of fossil fuels in the country. So far, however, we do not know sufficiently about this phenomenon.

Finnish forests have functioned as carbon sink for a long time

The good management and use of forests in Finland has increased the carbon storage in its forests for the past 70 years. The volume of stemwood in the forests has increased from 1,500 million cubic metres to the current figure of 2,500 million. The carbon contained in other parts of trees has increased in the same proportion, as has the carbon in the soil.

Finnish forestry is actually quite clever in that, while it uses the forest carbon storage as industrial raw material, it simultaneously works to increase the storage. According to a study by Natural Resources Institute Finland, two thirds of the increase in forest growth since the 1970s has been due to forestry and the increased number of trees, while 37 percent has been caused by environmental change, including global warming. This study did not cover peatlands and thus the more recent drainage of mires, for example.

Another way of expressing this is that only a part of the annual increment of Finnish forests has been logged during the past few decades. If the volume of harvesting is compared with the maximum sustainable potential harvesting levels, as estimated by Natural Resources Institute Finland – excluding natural removals of forest trees, harvesting in areas excluded for conservation reasons and also political decisions to increase the carbon sink – the actual loggings have only been about 85 percent of the maximum sustainable level.

Finnish forests will continue to function as carbon sink

The acceleration of the climate change has forced humankind to turn its gaze from fossil raw materials to renewable ones, including forest products. Increasing the use of renewable raw materials is considered to be one possible solution to climate change, as long as they are produced ecologically and fully sustainably.

Several projects to increase the industrial use of wood are under way in Finland. Some, though, see here the drawback that they will diminish the carbon sink in Finnish forests.

However, there are no plans in Finland to increase loggings to the point of eliminating the carbon sink. According to the Finnish Environment Institute, for example, increasing loggings will always diminish the carbon sink for a long time, if compared with not increasing them.

In exchange, many new products of the timber economy could become available to replace others which cause much greater harm to the environment. The best example of these may be textiles. Fabrics made of wood with new technolgies could replace cotton, the cultivation of which requires plenty of water and competes for land with food production. Wood construction, too, can replace concrete construction, which is more harmful to the climate.