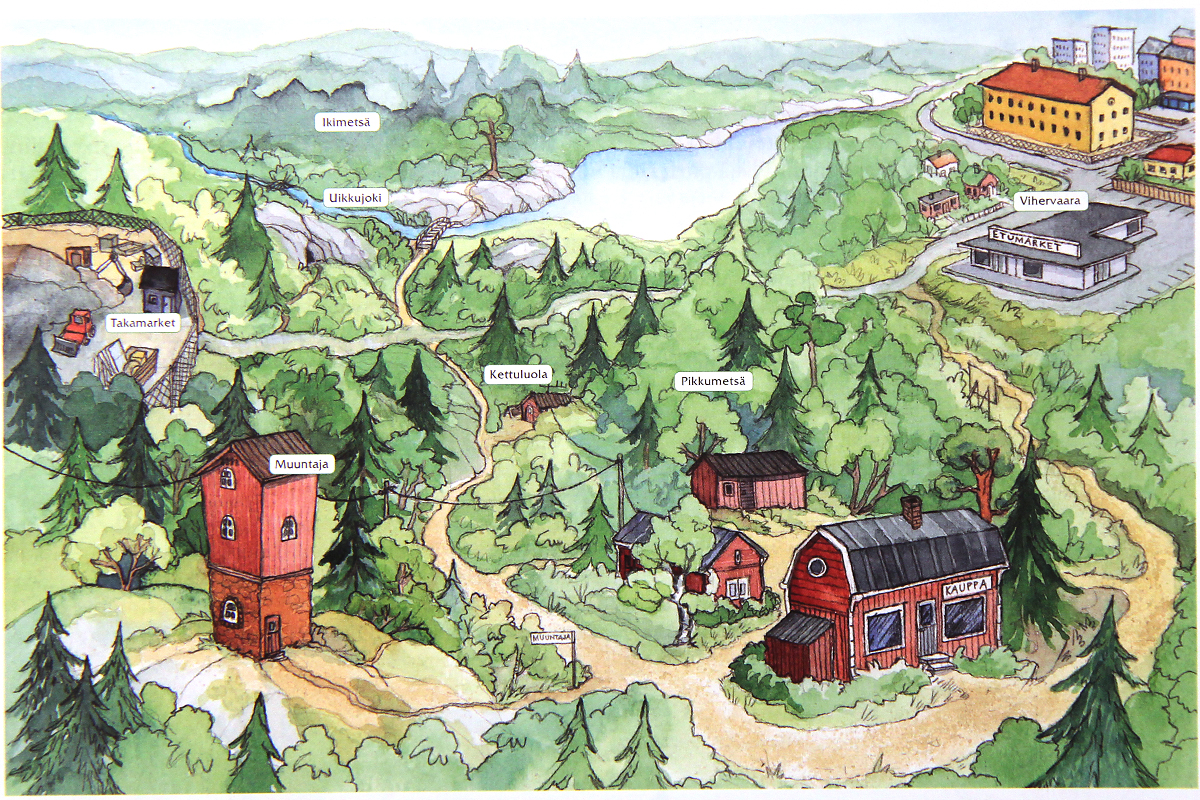 Little Forest is a small forest area, which the characters inhabit. Little Forest is part of the city called Vihervaara [Greenhill]. The big forest called Ikimetsä [Forever Forest] behind the river is a bit scary place.

You can get a really negative idea about felling trees from a Finnish ABC book called Pikkumetsän aapinen. That is not its goal, says writer Mervi Wäre.

The ABC book Pikkumetsän aapinen [Little Forest ABC Book], meant for first-graders and published by WSOY, has offended both forest owners and parents. Staff at the Finnish Central Union of Agricultural Producers and Forest Owners MTK and the forest owners’ unions have received feedback.

During the Forest Fair organized in mid-November, quite a few of those visiting the Finnish Forest Association’s stand brought this up. One angry mother had even written to several newspapers about the book.

So what is wrong? On the first pages of the book The Crow, a narrator figure, sees an unknown man in the Little Forest who then puts paint marks on the trees.

The Crow knows that nothing good will follow from this. It soon transpires that the Little Forest will be felled. The Crow reports the events in his diary and on the radio.

The plan is to build houses in the forest, but the animals plan to stop this, as the forest is their home. An efficient harvester arrives at the Little Forest and attacks the trees.

As the Crow tells it, the animals manage to stop the machine, though at first it seems that it will not stop. The driver runs away.

The forest is ultimately saved by the poop of the flying squirrel Niilo, who lives in the Little Forest. The houses will be built in a different place.

”We’re not condemning the use of wood”

”If you only read the Crow texts, you may end up with the negative perception described above,” says Mervi Wäre, schoolteacher and teacher educator and one of the writers of Pikkumetsän aapinen. “The true picture is revealed when you know all the other material related to the book, such as the teachers’ manual. The ABC book does not aim to condemn silviculture and the use of wood.”

Wäre has decades of experience in teaching both student teachers and children. Pikkumetsän aapinen is her fifth ABC book.

The above-described stories reported by the Crow differ from the story in the teachers’ manual. “The Crow is an egoistic and conceited character. His story is not the story that the children hear from the teacher,” Wäre says.

In the story as read by the teacher, the harvester is called a monster machine, but the driver does not try to drive over the animals but stops the machine.

The felling stops because the driver notices he is on the wrong piece of land. The driver does not run away, but walks to his car.

According to Wäre, the Crow texts are targeted to children who need a bit more challenge. The texts are meant to teach critical reading.

The harvester is described as scary because facing new things and phenomena is scary. “The children are not left permanently with the idea that harvesters are scary, as the teacher will lead a discussion about this,” Wäre says.

”In other stories in the book the forest is described as a place to enjoy and to pick berries in. The big Ikimetsä [Forever Forest] is scary to one of the characters, but not to another,” Wäre says.

The main characters of the book are animals, as they interest children. On the other hand, textbooks need stories and events in order to keep the kids interested. Boys tend to respond to stories with machines in them.

Wäre stresses that the characters and storylines have been thoroughly considered. Therefore one of the characters, Hukka-Uuno, is a dog instead of a wolf, as wolves arouse negative feelings in many.

The felling is not stopped because of a rally by the animals, but because the forest is inhabited by an animal protected by law
.
“We’ve only received positive feedback about Pikkumetsän aapinen from teachers and children,” Wäre says. “The main goal of the ABC book is to make the children interested in reading. It is fiction, not fact.”

“A lot of responsibility is left to the teacher”

Ms. Sirpa Kärkkäinen, Liaisons Manager at the Finnish Forest Association, says that Pikkumetsän aapinen leaves a lot of responsibility to individual teachers. “How nuanced and diverse the discussion on forests with the pupil is depends on the teachers,” says Kärkkäinen.

”If you only read the Crow text you are left with a stereotypical picture of nature: nature is for the animals, and humans are something separate and a source of disturbance,” Kärkkäinen says. She points out that humans have homes, too; they live in houses, and you can’t stop building houses.

”A problem is not genuinely solved if you only shift it to a different place, away from your own backyard. Here, the problem is moved from the Little Forest to Owl Hill,” Kärkkäinen says.

Wäre says the story is an exciting narrative about protecting your own home and its vicinity. “Pikkumetsä is saved because humans want to save it for recreation. The local authority designates another place for the houses. Everyone is satisfied,” Wäre says.

The Finnish National Board of Education is responsible for drawing up the national core curricula for basic education and general upper secondary education. The Board does not define or approve the content of school textbooks in any way.

Publishers are responsible for the books they produce. The teachers and schools decide what kind of books they use and how.

”There are no supervising bodies to check the books,” Kärkkäinen says. It is in the interest of the publishers to produce books which attract teachers; thus, it is good if the content of the textbooks match the national core curricula.

The Finnish Forest Association offers help to publishers of biology and geology books every time the national core curricula change and new books are made. “The last time round, the Otava publishing house asked for our comments, and we checked their books for outdated information,” Kärkkäinen says.

The example of the ABC book shows that the relationship between humans and nature is not only dealt with in biology and environmental education classes.