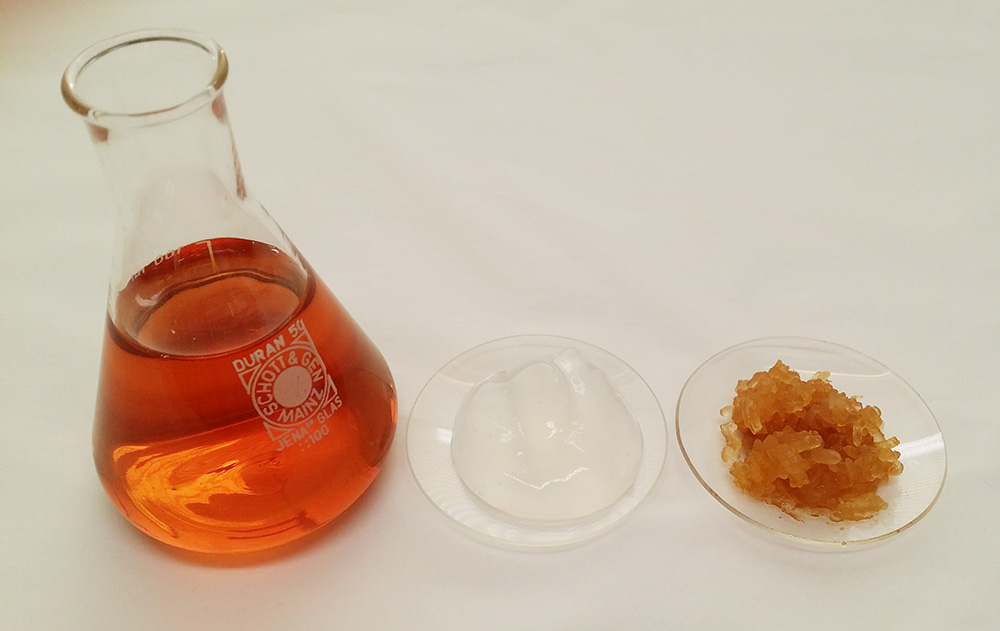 On the left, the acid process water including iron, for example, used in the research study. In the middle, the nanocellulose gel. On the right gel that has reacted with the process water to the left. The amount of sequestered iron can be concluded from the darkness of the gel to the right. Photo: The University of Helsinki

Nanocellulose made of tree sequesters metal and sulfate ions effectively. These occur in process waters of metal mining, and are difficult to remove by other means.

Usually the process waters containing acids and lots of soluble metals and sulfates have been treated by alkaline chemicals, such as limestone derivatives and sodium hydroxide.

Extremely soluble sodium and sulfate ions do not, however, precipitate this way. They end up in the surplus waters released to waterways from the mines. This may cause salinisation of waterways.

One of the most difficult environmental problems to be solved, that is caused by mining or energy production, is the salinisation of inland waters,” says Salla Venäläinen, research scientist at the University of Helsinki.

Venäläinen with her colleagues has studied, how the gel made of nanocellulose by forest industries binds along contaminants that occur in the industry process waters. Based on the results, the gel fits especially well in pre-cleaning of process waters of mining industries.

In laboratory tests, the three step treatment by the gel decreased the metal and sulftate concentration in acid process waters by almost 75 percent, depending on the dosage of the gel. Of neutralized process waters, even more than two thirds of sodium could be removed, and of sulfates, 80 percent. Results were better when the gel was made more solute by diluting it with water.

According to Venäläinen, the level of sequestration is significant, because the concentrations of metals and sulfates in the researched process water was very high. Over 98 percent of the used gels consisted of water.

The chemical characteristics of the nanofibres included in the gel can be changed according to what substances they should sequester. In ideal cases, the substances could be released from the gel afterwards and recycled back to industrial processes.