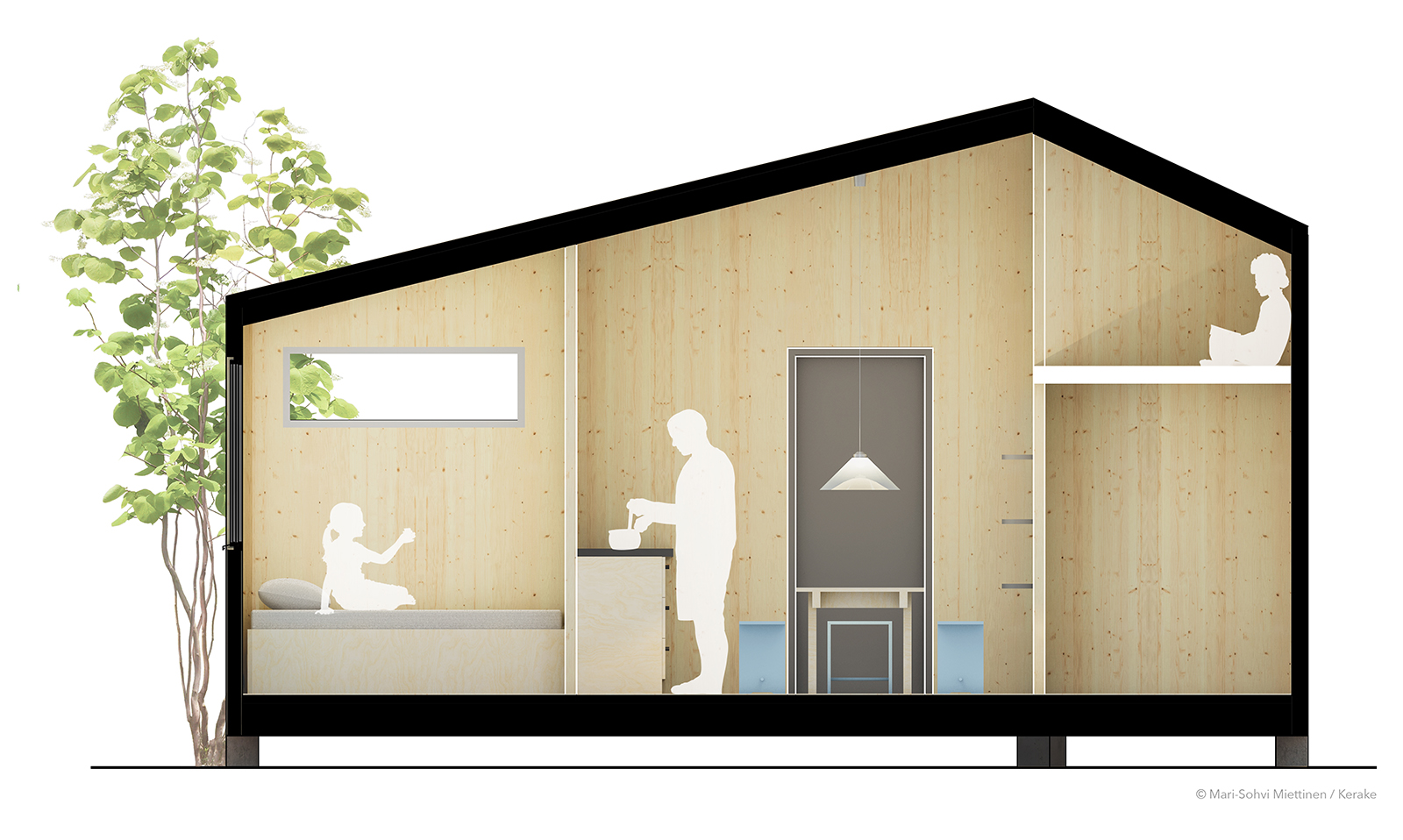 A low-carbon wooden building is an ecologically sustainable alternative to shelters made of plastic or steel on refugee camps.

Refugee camps often provide shelter in tents and containers, but in future, these could be replaced by Finnish wooden buildings of 21 square metres, thanks to the Kerake project run by the Seinäjoki Urban Laboratory of the Tampere University together with wood sector businesses in the South Ostrobothnia region. The Arbo shelter provides temporary accommodation to 4–6 people and can also be modified to make a permanent dwelling.

Sustainable solutions are needed because as much as 39 percent of global carbon emissions come from construction activity and buildings.

Wood is known to be an ecological material, and the starting point of the Kerake project was to promote low-carbon construction.

’In terms of its carbon footprint and especially its handprint, a wooden building is in a class of its own, compared to the metal containers widely used as shelters,’ says the building’s designer, architect Mari-Sohvi Miettinen from the Tampere University.

Miettinen’s statement is based on the carbon footprint calculation and comparison made by project manager Virpi Palomäki on the basis of the building concept.

Wooden buildings have several positive characteristics. In addition to the low carbon footprint, they are an example of the sustainable use of forests.

’Appropriately targeted, a wooden building has the potential to be an excellent solution in terms of environmental, economic and social sustainability, when accommodation is needed in and after a crisis,’ Miettinen says.

The price of one Arbo shelter varies from EUR 3,000 to 15,000, depending on the choice of materials and fixtures.

With a prolonged stay on the camp, such factors as security, privacy, clean water and food become more important. Schooling and studies, working and contacts with authorities may also need to be taken into account.

According to Miettinen, one of the main advantages of the wooden Arbo shelters is their adaptability. People may spend years or even decades on a camp, even if both refugees and camp staff would prefer the stay not to be permanent.

’Studies show that people like to modify their emergency dwellings to suit their individual needs,even when they know the stay to be temporary, or when the dwelling is not designed to be adaptable,’ Miettinen says.

Studies show that people like to modify their emergency dwellings to suit their individual needs,even when they know the stay to be temporary, or when the dwelling is not designed to be adaptable.

Miettinen points out that wood is relatively easy to work with simple tools, unlike the metal containers widely used on refugee camps. A wooden building can be given a new outer cladding or a porch.

When circumstances change, the wooden shelter or parts of it can be incorporated in a new, permanent dwelling.

Re-use is even more attractive when considering that  as a long-life wooden construction, the shelter will be a carbon storage throughout its existence.

Miettinen knows that our understanding of how wood materials affect people’s health and well-being is steadily increasing. Wood is experienced as an attractive material. It feels warmer to the touch than, say, metal or glass, and it has pleasant acoustical properties. Moreover, wood keeps the humidity of spaces more even.

’It’s been found that wood materials have a positive effect on stress levels and the ability to concentrate. This means they could be particularly suitable for the homes of people who have experienced great anxiety and stress because of a conflict or disaster,’ Miettinen ponders.

In principle, the Arbo shelters can be used anywhere, though wood-destroying insects may limit their use in tropical regions. In colder climates the shelters must be equipped with heating.

The Finnish company Afstor Oy has developed a solar cooker for preparing food. It can also be used to light reading lamps and charge mobile phones. The cookers are already being used in, for example, Zambia.

’However, further away from the equator we’re likely to need other energy sources as well. It’s indeed important to develop and support cooking methods that don’t require the burning of wood sourced locally,’ Miettinen says.

Another crucial aspect is sanitation, which requires familiarity with local cultures. The Kerake project has studied a system developed by the Finnish company DTS Finland, which can turn sanitation waste into fertilizer, thus supporting local food production in regions suffering from crises.

’We’ve designed several versions of the shelter, with a dry toilet either indoors or in a separate building outdoors. The shelter is large enough to accommodate a shower cubicle. There are already coatings for cross-laminated timber [CLT] that enable it to be used in wet rooms, too. Not having to share toilets or washroom facilities is really important especially on refugee camps and as regards the safety of women and children,’ Miettinen points out.

Not everything needs to be decided in advance

Life on refugee camps and therefore also the use of the Arbo shelters as dwellings may also involve problems.

According to Miettinen, those in need of help may be less than happy if they have little opportunity to affect things related to their accommodation and if everything has been decided for them.

’It’s important that people can feel an ownership and have some say with regard to their accommodation, as soon as the situation allows,’ Miettinen notes.

Miettinen explains that the project team wanted the building concept to have ’an architecturally assertive appearance’, to distinguish it from other options. Still, arriving at the final design was not quite straightforward. One of the problems encountered was the dimensioning of windows.

’We were told that the design looked too pricey, which might cause interested parties to reject it. We also interviewed a refugee worker who mentioned that a modest appearance is often preferred for reasons of policy,’ Miettinen says.

’We made the appearance less showy and went for a hidden potential and adaptability: it is possible to install larger windows and an outer cladding later, when the crisis is no longer so acute,’ Miettinen explains.

Wars and crises have had an impact on architecture even before this.  Finns are familiar with the gable-roofed one-family houses designed for the postwar reconstruction period in the late 1940s. The demand for these houses was greater than the capacity of the Puutalo Oy company.

No competition with tents

Miettinen can see that the Arbo shelter has a commercial potential, though from the perspective of humanitarian organixations these high-quality Finnish products may be too expensive.

’With limited resources, people normally prefer a lower standard in order to bring help to as many as possible,’ Miettinen notes.

It may be difficult for Finnish companies to gain a foothold on the international market and to reach the actors that can bring the products to the buyers. As regards commercialization, Miettinen sees the bottleneck to be in finding good contacts and gaining a foothold on a market that is extremely cmpetitive.

’It’s important to identify the most appropriate use for these wooden shelters: they can’t compete with the price and speed of putting up of tents, for example. Small buidings based on the sustainable use of forests could perhaps appeal to actors who want to find an all-round sustainable way of providing new homes to those who have lost theirs,’ Miettinen says.

Small buidings based on the sustainable use of forests could perhaps appeal to actors who want to find an all-round sustainable way of providing new homes to those who have lost theirs.

Miettinen goes on to say that a number of Finnish companies have the capability to produce buildings such as the Arbo shelters, even at considerable volumes and with tight deadlines.

’In the end, it’s a very simple product. The important thing is to understand the complexity involved in providing accommodation for refugees, and to figure out how you could assist in that,’ Miettinen ponders.

Miettinen says that the information gathered during the project has been formulated as a conceptual plan. The concept includes the idea that over time, the shelter can be tailored as desired, also as regards building technology and fixtures.

’A concept is still a long way away from an actual product. Product development will only make sense when there’s more detailed information of the target country and the standard expected by the customer,’ Miettinen says.