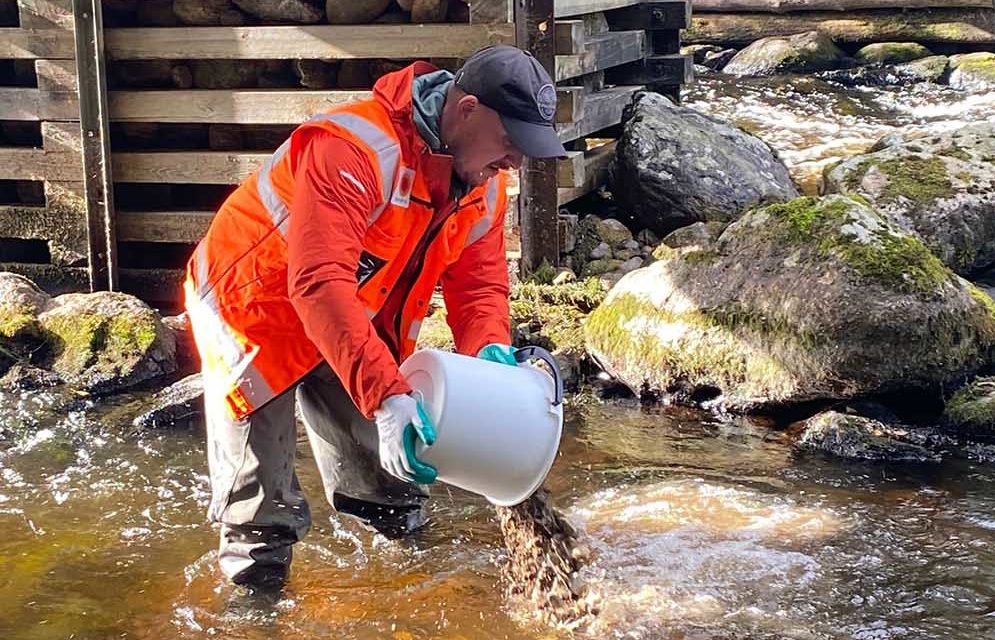 We listed six aeas in flowing water bodies that have been or will be improved and restored to support fish populations and improve the ecology of the waterways.

Rivers and streams are important habitats for threatened migratory fish, such as trout, salmon and migratory populations of European whitefish.

Flowing water is also advantageous for threatened aquatic insects, mosses, crayfish and bivalves, as well as mammals such as otter.

The river bed was given more variety by placing stones and tree stems in it and digging pits. Gravel was added to make breeding grounds for fish.

Before this, a dam had been removed from Peukalonjoki, thanks to which threatened migratory fish are able to swim upriver.

Stora Enso, Tornator and WWF have agreed on a three-year collaboration project called For the forest streams in Finland. The aim is to restore small water bodies whose course mainly runs in forests.

2. Restoration of natural conditions for salmonids

The chute of the Sapsokoski rapids in Sotkamo (Kainuu Region) was restored in August. The work took about a fortnight. The aim was to re-create conditions that would allow salmonids to return to the river according to their natural life cycle.

Before the restoration, a mill and a dam were removed from Sapsokoski in 2020, opening up an unhampered route of more than 20 kilometres for fish in Kainuu. There are now at least 12 rapids along it.

During the restoration, gravelly spots, stones and rocks were dug up by mechanical excavation and repositioned in the river bed to improve the habitat. According to UPM, it is expected that the production of micro-organisms important for young fish would start rapidly.

The work was part of UPM’s migratory fish programme, which aims at improving biodiversity. The purpose is to revitalise fish populations in locations where fish can best thrive in natural conditions.

The restoration of Sapsokoski was a collaboration between UPM Energy, Fortum, Kainuun kalatalouskeskus [The Kainuu Fisheries Promotion Association] and the Lapland Centre for Economic Development, Transport and the Environment.

3. Revitalisation of fish populations in Mämmenkoski

The Mämmenkoski rapids in Äänekoski (Central Finland Region) were restored in the summer of 2020. Thanks to the work, fish now have a free run from Kuusamo to lake Ala-Keitele, and trout are able to breed in the rapids area.

The restoration included the opening of two dams that prevented the trout from travelling upriver. One of the dams was modified with structures that enable the water flow to be controlled and the fish to run past the rapids.

In addition, the bed of the rapids was improved and shaped as a close-to-nature fish stair with paving. Breeding grounds for trout were also made, as well as areas where young fish would thrive.

The project was a collaboration between Metsä Botnia, WWF Finland, the North Savo Centre for Economic Development, Transport and the Environment and the Mämmenkoski owners.

Kaarneenkoski rapids in Kuhmo (Kainuu Region) were restored in September. Gravelly areas for the breeding of lake trout and other migratory fish were made, existing breeding grounds were improved and the course of the rapids ws cleaned. According to Joel Sahlman, Purchasing Manager at Stora Enso Forest, about ten breeding grounds, roughly 30 centimetres in height and 3 to 5 square metres in size were constructed in suitable places.

The work was caried out by volunteers: eight employees of Stora Enso Forest, four members of the Kuhmo Fly Fishing Association and others from the  Iivantiira Fishing Rights Owners.

5. Dismantling the dam at Arvajankoski

In August, UPM began the dismantling of the dam in Arvajankoski (Central Finland Region) and the restoration of fish populations in the area. The work is estimated to take two to three months, and during it he 19-kilometre course of the Arvaja rapids will be opened up.

According to UPM, the restoration will significantly extend the areas suitable for the breeding and juveniles of endangered trout. Overall, the work will revitalise the waterways and surrounding areas, including animal populations and fish populations.

Arvajankoski has been the site of grain mills, sawmills, structures for timber floating and water intake facilities since the 19th century. A dam and a building housing the water intake equipment of UPM’s Kaipola mill were a part of the landscape since the early 1970s. Up to 2015, Arvajankoski was the mill’s water source, but since then water from Lake Päijänne was used.

To begin with, a temporary dam will be constructed in Arvajankoski, to bring the water level low enough for work to be possible.

After the dam is complete, the old structures for water pumping and regulating will be dismantled and a permanent submerged weir will be constructed. Thanks to the weir, water level upstream of it will settle on the current mean level, reducing the fluctuation of water height. In future, water level will not be regulated.

Arvajankoski will also be restored with a view to enabling fish to travel to rapids upstream.

The Arvajankoski project is part of the national NOUSU programme, administered by the Ministry of Agriculture and Forestry. The programme aims at improving the living conditions of migratory fish and restoring the spontaneous breeding of migratory fish populations in Finland.

Metsä Group will finance the restoration and improvement of the Virtaankoski in the Tainionvirta river in Sysmä (Päijät-Häme Region) in the summer of 2023. Thanks to the project, trout from Lake Päijänne will be able to travel upriver to Lake Nuoramoisjärvi and breeding grounds above it.

Ten years ago, the Government of Finland defined Tainionvirta as the most important area to be restored in the Päijänne basin, with a view to supporting the endangered lake trout.

Virtaankoski is only one of the flowing water projects of Metsä Group. The company is also financing the improving of three rapids in the Hiitolanjoki river in the municipality of Rautjärvi (South Karelia Region). The first of these was Kangaskoski rapids, and all three were completed by November 2021.

Hiitolanjoki is important for the critically endangered lake salmon which runs to Finnish waterways from Lake Ladoga, as well as for trout. Both of these species will benefit from the opening up of dams.

In last autumn’s funding applications round, Metsä Group decided that it will finance eight projects for the total sum of EUR 350.000.The round focused on fish, water bodies and aquatic ecosystems.

Updated 5.9.2022 at 9.13 AM: The photo taken of the Hiitolanjoki is not Stora Enso’s. It is taken by Arto Apila / South Karelia recreation area foundation.

Read more: Restoration of forest brook preserves whole habitat – but will it bring back the lampreys?