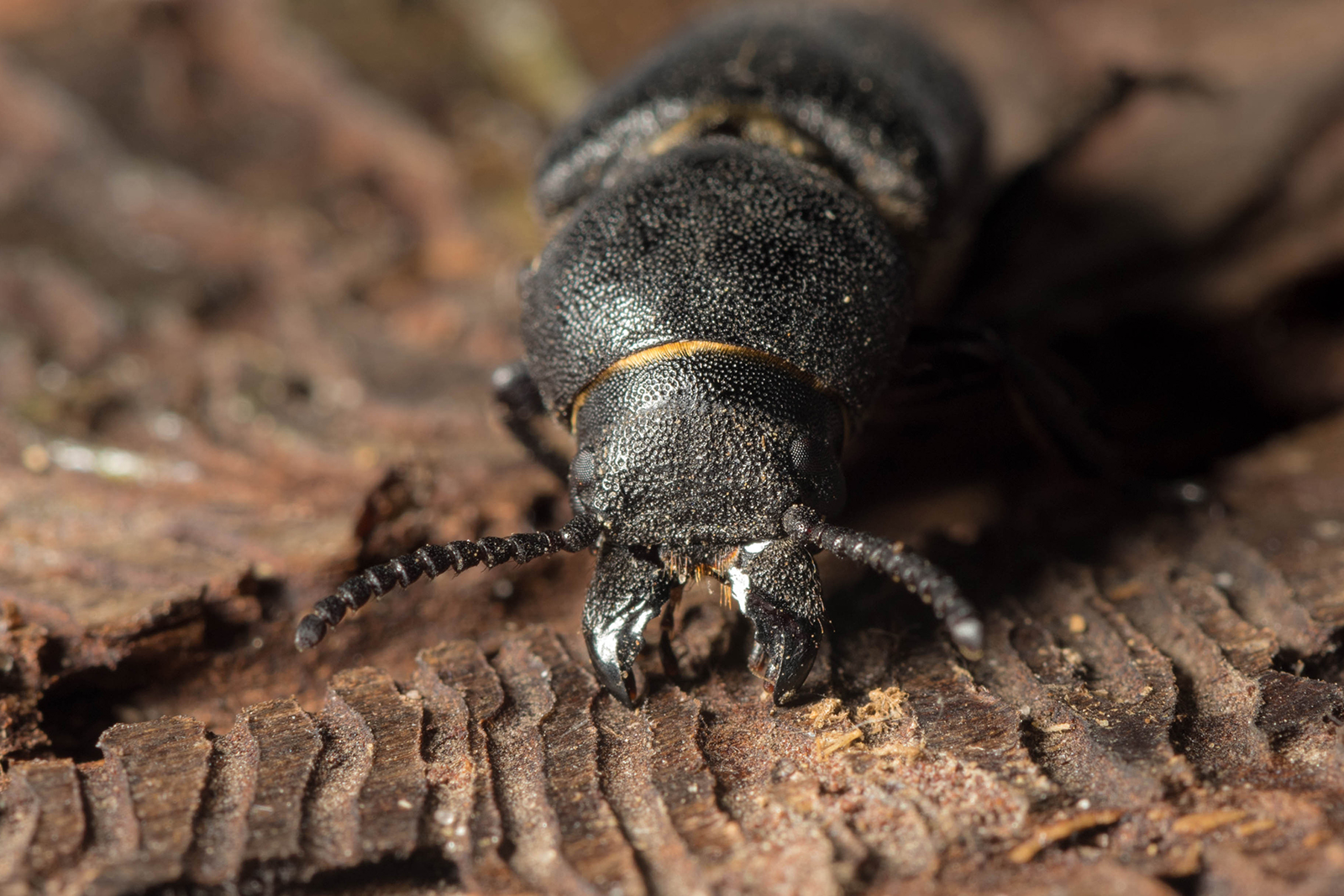 There are thousands of species of bark beetles in the world, of which the European spruce bark beetle is the worst for the economy. Photo: Shutterstock

The mild and stormy winter causes fears that new invasive alien species could appear in Finnish forests. Professor Jarkko Hantula says the risk of forest damage is increased by the proliferation of spruce and the eventual growing popularity of continuous-cover silviculture.

Hantula considers that the issue of forest damage has only merited some headlines in the climate debate.

“It is not enough to say that forest damage will increase due to global warming. We need a broader overview of what causes damage, how it is spread and especially how it can be fought against.”

Hantula is Professor of Forest Pathology at Natural Resources Institute Finland and is known, among other things, for his research on the Heterobasidion fungus and the means to prevent its spreading.

Hantula is currently worried about the European spruce bark beetle. He sees a clear connection between its spreading and climate change.

“The European spruce bark beetle benefits from increasing storm damage and higher temperatures. In the worst case, these may enable it to produce several generations within a year.”

In addition to climate change, Hantula names another factor that helps the beetle: the proliferation of spruce in Finnish forests.

The European spruce bark beetle has caused severe damage in spruce forests in Central Europe, particularly in the Czech Republic and Slovakia. The results are seen in timber trade even in the Nordic countries: the markets are suddenly flooded with huge batches of timber that simply must be sold. Above all, dead timber must be removed from the forests, as otherwise it would only help to support more beetles.

“The spread of the beetle in spruce-dominated forests is a great challenge in Europe, and Finland must prepare itself for it as well. The European spruce bark beetle is particularly fond of stout spruce logs, so such trees should be harvested on time,” Hantula says.

’Even-aged silviculture enables the best use of the results of genetic tree improvement. It helps us improve the growth of trees and their resistance to damage,’ Hantula says.

He also encourages forest owners to favour mixed forests, which are more resistant to damage and disease. Continuous-cover, on the other hand, would lead to even more spruce and risk of damage, he considers. Even as it is, conifers are the dominant species in 80 percent of Finland’s forests.

Continuous-cover silviculture has only been carried on in Finland for a short time and Hantula finds it suitable for valuable natural sites and for decreasing carbon emissions or emissions to waterways from peatlands. It may also be appropriate for aesthetic reasons in areas close to settlements and leisure homes.

Pine is pestered by fungi – and elk

Regeneration fellings and mixed forests would also be an effective check on some pests, including Heterobasidion, which has been regarded as the worst cause of forest damage and loss of timber revenue in Finland until now.

Heterobasidion also destroys spruce stands. If a forest is infested with it, the only remedy is to fell the conifers and plant deciduous trees.

Hantula says that Scots pine, the other dominant species in Finnish forests, is not damaged by insects comparable to the European spruce bark beetle, but by fungal diseases such as the Brunchorstia disease. Caused by the Gremmeniella abietina fungus, the disease kills annual shoots and branches in the lower parts of the pine canopy and may destroy the entire canopy in a few years.

“Historically, severe occurrences of the Brunchorstia disease have been seen maybe every 50 years. Most recently the cold summers in the 1980s brought about forest damage by this disease, though the cause was then thought to be acidic fallout. A similar epidemic was seen in Sweden during a cold summer in the early 2000s.”

Pine stands in Finland have also been attacked by enemies much larger than inserts. The substantial populations of elk and European roe deer prefer pine seedlings and very frequently feed on them, which makes forest owners, in turn, prefer spruce when regenerating.

“That’s why forestry benefits if elk and deer populations are kept on a reasonable level,” Hantula says. The other benefit is that there are fewer road traffic accidents .

The unprecedentedly mild temperatures and lack of snow this winter do not worry Hantula. The 2008 winter was very similar to this one, yet did not lead to anything particularly remarkable in terms of forests.

“I don’t think this winter will have very dramatic consequences, either. Changes take place over a longer period. Speaking of the European spruce bark beetle, it is difficult to predict whether the lack of protective snow cover is good for it or whether it might itself be troubled by fungal disease, for example.”

Hantula points out that there are several invasive species in Europe whose movements are being monitored. New harmful species as yet unknown in Finland have already been seen in Estonia, Russia and Sweden.

“Ash dieback has caused severe damage in Europe, and Dutch elm disease has decimated elm stands in Central and Southern Europe. An outbreak of the latter disease was found last year In Vyborg, just 40 kilometres from the Finnish border. If it spreads to Finland it will be a great risk to our valuable elm stands. We are also monitoring the emerald ash borer beetle, which is travelling westward from the Moscow region.”

“And if something like the pine-pine gall rust that damages pine forests in North America should arrive here, we would indeed have our work cut out.”

This article is part of the ‘Metsä vastaa’ (the forest answers) communication project of the Metsämiesten Säätiö Foundation, which is publishing topical speeches about sustainable forestry.

It is exciting to see that there is interest in studies of the biotic damage that climate change could imply for Finland’s forest, in this case by bark beetles. Attacks of moth species could ease bark beetle attacks. Moths as Lymantria monacha (nun moth) and Lymantria dispar (gypsy moth) lead to losses in stand growth, which requires great investments in monitoring and controlling. For example, in Poland in 1853-1855, L. monacha outbreak damaged about 403,000 km2 of forest and opened the door for a severe outbreak of Ips typographus (Bejer, 1988).
Those moths are now in south Finland, with different densities that require careful studies (Melin et al., 2020), what is my topic of interest.