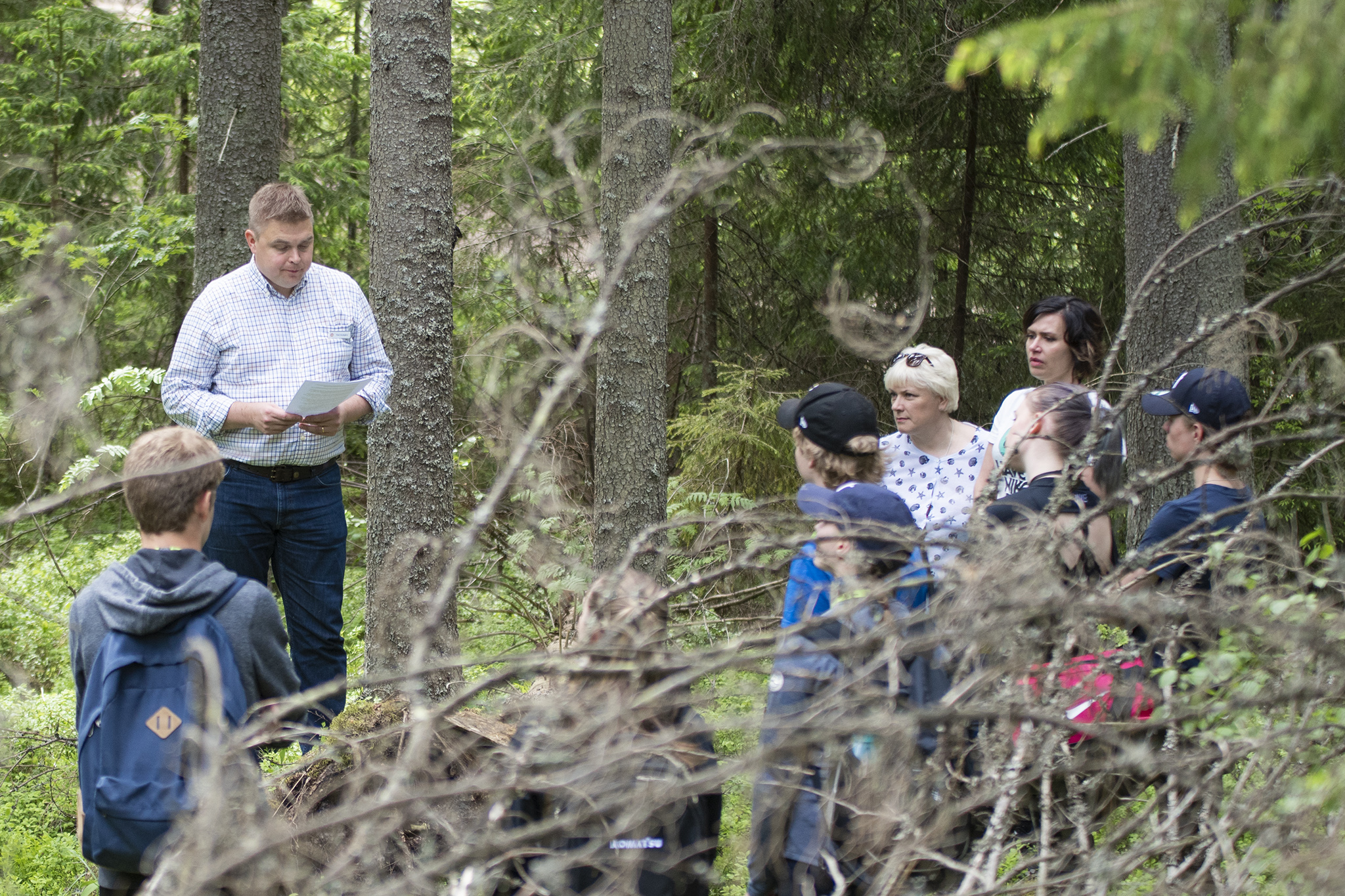 Root rot causes damage worth of tens of thousands of euros for Finnish forestry annually. This was emphasized at the Forest Quiz organised by the Finnish Forest Association for schoolchildren in May, 2018, where Petri Kortejärvi from the OP Financial Group was discussing the subject. Photo: Vilma Issakainen

Swedish researchers have identified a gene that slows down the growth of root rot in spruce. In Finland the discovery will be utilized by selecting spruces with a better genetic resistance to root rot for breeding.

A team of Swedish researchers, Miguel Nemesio-Gorriz et al., have conducted basic research with a view to breeding a spruce with a better resistance to root rot. The breakthrough came when they found an explanation on the genome level to why some individual trees withstand the root rot better.

”They managed to identify a gene that slows down the growth of root rot. In functions in exactly the same way as the human genes determining blood type or eye colour,” says Jarkko Hantula, Research Professor at Natural Resources Institute Finland.

The gene in question is advantageous in that it affects the descendants even if it was inherited from only one parent.

According to Hantula, the gene does not prevent root rot from spreading, but it does slow it down. The spreading of the mycelium in spruce slows down by 27 percent, but in reality, the decline in damage is even greater, because the journey of the mycelium from the rootstock to the tree butt will slow down.

There are two species of root rot in Finland

There are two species of root rot in Finland, one found in pine (Heterobasidion annosum) and another in spruce (Heterobasidion parviporum). Only the latter is a significant cause of rot in roots and butts.

The root rot specializing in spruce causes more damage in more southerly locations. It decays the most valuable part of the trunk, the butt log, and this alone causes an annual loss of EUR 50 million to Finnish forest owners selling wood.

”In addition, there are many indirect effects, the size of which we don’t know, such as the weakening of growth due to diseased rootstock,” says Hantula.

Another loss is the potential value added of the logs that cannot be sold to industry. The size of this loss cannot be estimated, either.

There are plans in Finland to utilize the Swedish discovery as rapidly as possible. The fastest method is to take spruces with a better resistance and multiply them asexually, which is something that can be carried out successfully for spruce.

”Another method is to study the genomes of individual spruces to see which of them have the gene in question and which do not. This gene test can be easily carried out using, for example, the spruce needles,” says Hantula.

”When we find spruces that have inherited the resistant gene from both parents, all their descendants can be used on contaminated stands, because all the descendants of these trees will be resistant,” says Hantula.

A third method is the traditional one, to select spruces with a proven resistance and continue breeding with them. This method is, however, clearly slower than the other two.

The research project led by Hantula is not designed to carry out actual breeding, but it will set up the foundation by finding the spruces with the best resistance from among seedling spruces in southern Finland. Hantula and Muhammad Kashifi, the project’s field worker and researcher, are going to study the genome of 2,000 individual spruces.

Then it is up to the forest breeding specialists to continue with what has been found. ”We could well have spruce seeds and seedlings with a better resistance against root rot on the market very soon,” says Hantula.

A forest contaminated by root rot presents a challenge because the fungus spreads underground in the rootstock of the trees. It can be wiped out completely from a contaminated forest stand only by clearcutting – that is, by removing the spruces and replacing it with another tree species, which must be broanleaved, such as birch.

The safest way is to allow the birches to mature and only then begin to consider whether to replant the stand with spruce.

”According to a recent observation, root rot spreads through the rootstock faster if there is a dense undergrowth of small spruces. This is because then the rootstock will also be dense and the conditions for the spreading of root rot will be ideal,” says Hantula.

However, it is possible to restrict the contamination by root rot. In Finland, the best way is to harvest the forest during wintertime. The forest is infected by aerial spores through the cut surfaces of stumps, but in cold winter conditions no spores are dispersed through air.

If harvesting in winter is not possible, another method of prevention is to spray the stump surfaces immediately after cutting with urea or the Phlebiopsis gigantea fungus, which is a natural competitor of root rot.

The treatment is actually obligatory in southern and central Finland when harvesting coniferous forest stands in the summer and can be easily carried out with a harvester.

”The success of stump treatment is 90 percent, and harvesting in winter leads to even better results,” says Hantula.

Continuous-cover silviculture, prevalent within the EU, can in Finland be best applied on peatlands with a natural availability of good seedlings.