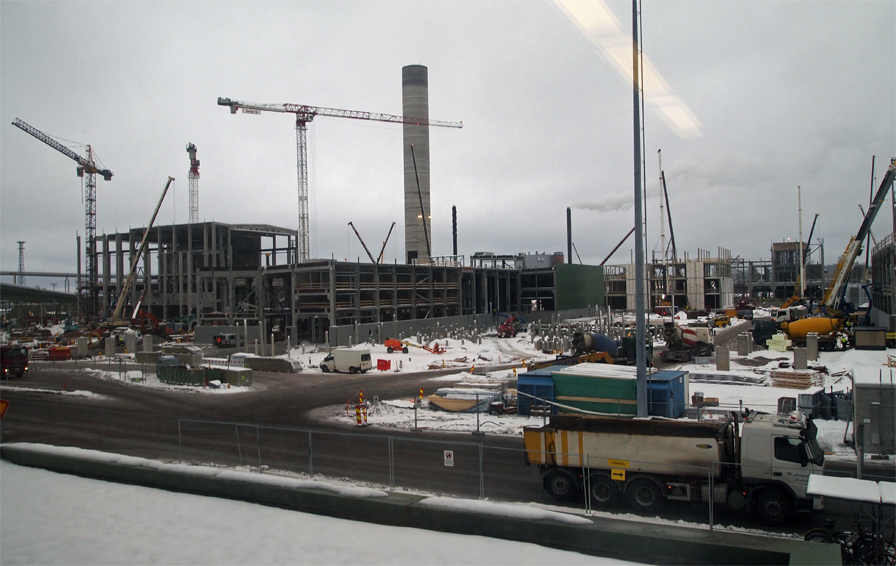 To begin with, one fifth of the turnover of the Äänekoski bioproducts mill will be derived from products other than pulp. The mill site already hosts several other wood processing companies, and the number is set to increase.

Metsä Fibre’s existing pulp mill on the Äänekoski site has working links to at least five other companies: the Metsä Board paperboard mill; CP Kelco, which produces CMC pulp: the minerals producer Speciality Minerals; the energy company Äänevoima; and Valio, which uses heat from the pulp mill to produce the classic Aura blue cheese, among other things.

The production of sulphuric acid from odorous gases and the processing of lignin from the mill into glue and composites are being developed. The production of fuel gas from tree bark for the bioproducts mill by Metsä Fibre will also start in due course.

Thanks to the gas, the mill will be completely independent of fossil energy. The production from the gasification plant will replace 45,000 cubic metres of heavy diesel oil annually.

Biogas from the whole of Central Finland

Connected to the mill’s wastewater treatment plant, the EcoEnergy SF company will begin to produce biogas for transport use. At the first stage, its raw material will consist of sludge from the treatment plant, but later on it will also use all types of biomass available in the region.

The plant is the first one of its kind in the world to be connected to a pulp mill. Among other uses, its product will be delivered to a fuel station by the nearest main road, to be sold to passing motorists.

The aim is to also use the gas in industrial transport, as soon as the first lorries running on gaseous fuel come into use in 2017. After this, the forest industry will be able to minimize the use of fossil fuels in its transports as well.

After the commissioning phase is completed in 2017, the plant will employ 12–16 persons directly. Its annual production is designed to reach some 20 gigawatt hours, which corresponds to the annual energy use of some 1,800 passenger cars.

The company also plans to produce synthetic gas from energy wood in the future. This would increase the production to 100–600 gigawatt hours annually, which corresponds to the energy content of 10–60 million litres of diesel oil.

The production of biogas does not dissolve all of the lignin in the sludge. This is why even the putrefaction residue can either be burned to generate energy or used as fertilizer and soil improving agent.

One of the bodies supporting the project is the Finnish Funding Agency for Innovation Tekes.

Composite from pulp and plastics

The Aqvacomp company had plans to start the production of composites in Äänekoski at the same time as the bioproducts mill starts its operation. Thanks to high market demand it became necessary to move the start forward.

Production will actually be started at the beginning of 2017 at Metsä Fibre’s Rauma mill. However, Äänekoski is also being evaluated for the possibility of starting a plant with a larger capacity than at Rauma.

The granulated composite of pulp and plastics produced by the company is used in musical instruments, for example. Many references show that, in terms of its quality, the composite is even better than many rare and threatened wood species, such as ebony. What is more, the production is rapid: the fingerboard for a guitar can be produced in one minute by injection moulding.

The breakthrough during the development phase came with the combining of plastics with pulp that had not been dried. This eliminated the energy-intensive drying process. The result is a product that corresponds precisely to specifications and in which the shares and grades of pulp and plastics can be modified according to each end product. The share of pulp in the end product is typically between 20 and 40 percent.

Pulp can replace the materials used to reinforce plastics, such as minerals or glass. Not only does it work better, but it is also renewable and lightweight, thus decreasing transport costs.

The composite is used in the manufacturing of cars and home electronics. The company aims at production with high added value. The plant will employ five persons per shift. Markets for the product are developing rapidly, especially in Asia.

Among all the innovations, the project to produce textile material from pulp may be the one furthest away from actual production. However, Metsä Fibre and the Japanese Itochu Corporation, which owns 24.9 percent of Metsä Fibre, have invested substantially in this.

Textile material is already manufactured from wood by first processing wood into dissolving pulp and then into viscose. A new technology strives to bypass the stage of viscose manufacturing, as it is highly harmful to the environment.

The technology is being developed in collaboration by the University of Helsinki, VTT Technical Research Centre of Finland and the Aalto University. Metsä Fibre and Itochu have started a development project to commercialise the production; the next phase will be to take the laboratory-scale production process to a pilot plant.

The price of the product cannot be determined as yet, but in order to survive on the markets, it must be able to compete with corresponding products. What we do know is that the price of viscose, for example, is somewhere around EUR 1,000 per tonne.

Wood fibres are familiar to Itochu, which has worked with textiles for 150 years. As a partner of Metsä Fibre, it offers know-how of the textile markets that are unfamiliar to a forest industry company.

To gain an idea of the impact of wood fibres on the textile markets it is perhaps helpful to know that ten million cubic metres of wood are needed to produce close to two million tonnes of textile fibre. The annual global sales of textiles fibres are about 70 million tonnes.

Video film from the construction site of the bioproducts mill

Value of Finland’s forests has soared, contrary to that of forest industry – solution lies in new products instead of “pulp chauvinism”