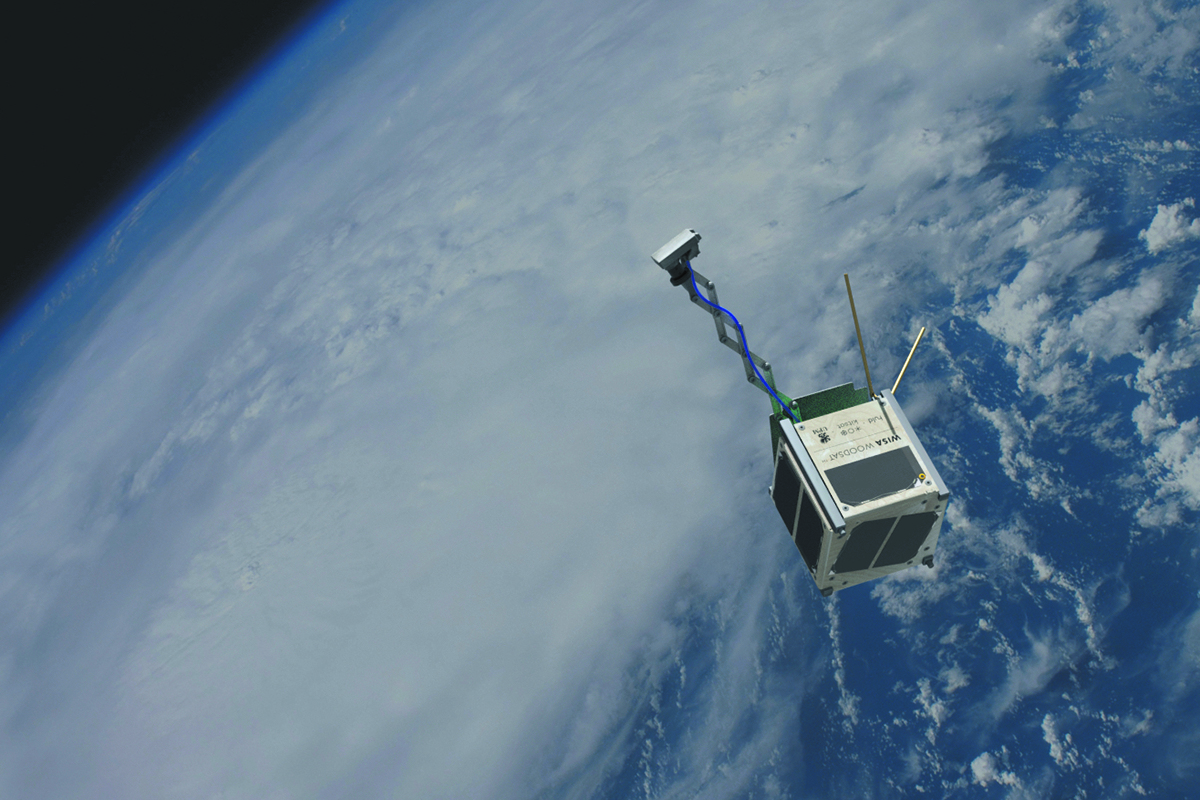 Illustrative drawing of the WISA Woodsat plywood satellite in space. The satellite includes a ’selfie stick’ to gather images that will be freely available to radio amateurs. Photo: Arctic Astronautics

The first-ever satellite made of wood will be launched to orbit the Earth by the end of 2021. It will be used to study the durability of wood in space. Another aim is to educate the general public about space technology and science.

The satellite will be made of plywood produced by UPM Plywood in Savonlinna, Eastern Finland. UPM is developing the satellite together with the Finnish company Arctic Astronautics, the European technology design house Huld and the European Space Agency (ESA).

The next stage in the project will be testing to ensure that the satellite and its wooden structure will withstand the velocity of the launch vehicle.
The satellite is designed and built by Arctic Astronautics. The work is based on the Kitsat satellite designed for education purposes. The completed satellite will be a cube measuring about 10 x 10 x 10 centimetres and weighing about one kilogram.

The satellite will gather data on the behaviour and durability of plywood in the extreme temperatures, vacuum and radiation in space, The birch plywood will be monitored by two cameras, one of which is placed at the end of a deployable boom. The boom will be 3D printed by Huld.

The ESA space materials laboratory will deliver the sensor suite for the satellite, to record changes in the plywood. The satellite will be powered by nine small solar cells.

At the same time, the satellite will test an extremely easy-to-use and cost-effective IT technology for the use of radio amateurs, and a new type of position control technology. ’Also, the WISA Woodsat will validate the Kitsat platform in orbit and popularise satellite communications and space technology,’ says mission manager Jari Mäkinen from Arctic Astronautics.

’The WISA Woodsat carries the important message that fossil materials can be replaced with renewable, wood-based materials even in demanding applications,’ says Ari Voutilainen, the space project manager for UPM Plywood.

The WISA Woodsat satellite will travel round the Earth on a polar orbit at an altitude of 500 to 550 kilometres. Each orbit will take ninety minutes.

Correction, 4.6.2021: Sentence ‘In contrast to ones made of conventional materials, wood-based satellites will not add to space debris at the end of their useful lives’ was removed.

One comment on “Wooden satellite to test plywood in space”