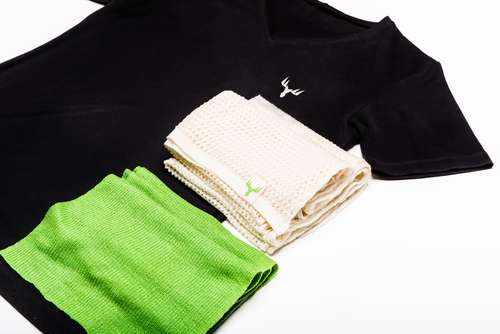 Producing textiles from wood fibres always means that the fibres must be dissolved. In traditional viscose production this is done with the help of carbon disulphide, which, however is highly toxic and flammable. The main goal of the new technologies is to find a way to avoid the use of carbon disulphide.

Technical research centre VTT is a central player in wood textile development work in Finland.
Of the projects under way at VTT, the farthest advanced is the carbamate process technology. In this technology, dissolving pulp is treated with urea.

The fibres produced in this process are soft, which makes them well suited to hygiene textiles and cotton mixtures, for example.

In fact, the carbamate technology is not a newcomer and this is why it already now is well developed. A pilot plant at VTT’s research centre Bioruukki in the Helsinki region will start producing textile staple fibres in June 2017. The product will be commercialised by Infinited Fiber Company.

In another technology, called BioCelSol, the pulp fibres are modified with enzymes. However, we do not know whether this technology is suitable for industrial production.

The third technology is called Ioncell-F. An advantage of the fibre produced with it is its superior strength as compared to the textile fibres sold today. On the other hand, the fibre is more fragile, it pills more easily and is more difficult to dye.

Ioncell technology uses an ionized solvent developed by the University of Helsinki. The main problem in the development work is how to recover the solvent.

It is produced by pulling the fibres through air using a method developed by the Aalto University.

For the time being, only a couple of small garments have been produced with the Ioncell technology. The next stage aims at scaling the production up to pilot scale. However, it is highly improbable that Ioncell could be used on an industrial scale before the late 2020s.

Same technologies suit in textile recycling as well. This is very interesting because of the environmental problems of cotton production and the increasing amounts of textile waste.

De-dyed and cleaned cotton can be used as raw material in both the carbamate and the Ioncell process.

If the production of wood fibre textiles can be profitably commercialized using these technologies, success can be guaranteed. Forest-based raw material is better in terms of its environmental impact. The cultivation of cotton creates one of the largest environmental problems in agriculture; unlike wood fibres production, it also competes with food production for arable land.

And, compared to oil-based synthetic fibres, the production of wood fibres is better, being based on renewable raw materials. Thanks to the new technologies, the fibres are also fully recyclable.

All tree species are suitable for the production. In addition to this, textile fibre has a high added value – in terms of its price per kilo, for example, textile fibre easily wins all previous bulk products of the forest industry.

Of the Finnish forest industry companies Metsä Fibre and Stora Enso participate the development work of Ioncell process. Finnish textile company Marimekko also participates the work. Metsä Fibre has established a new company to carry on the development work. The Metsä Spring company has started to construct a test factory in Äänekoski. The EUR 40 million investment will be taken into use in the end of 2019.