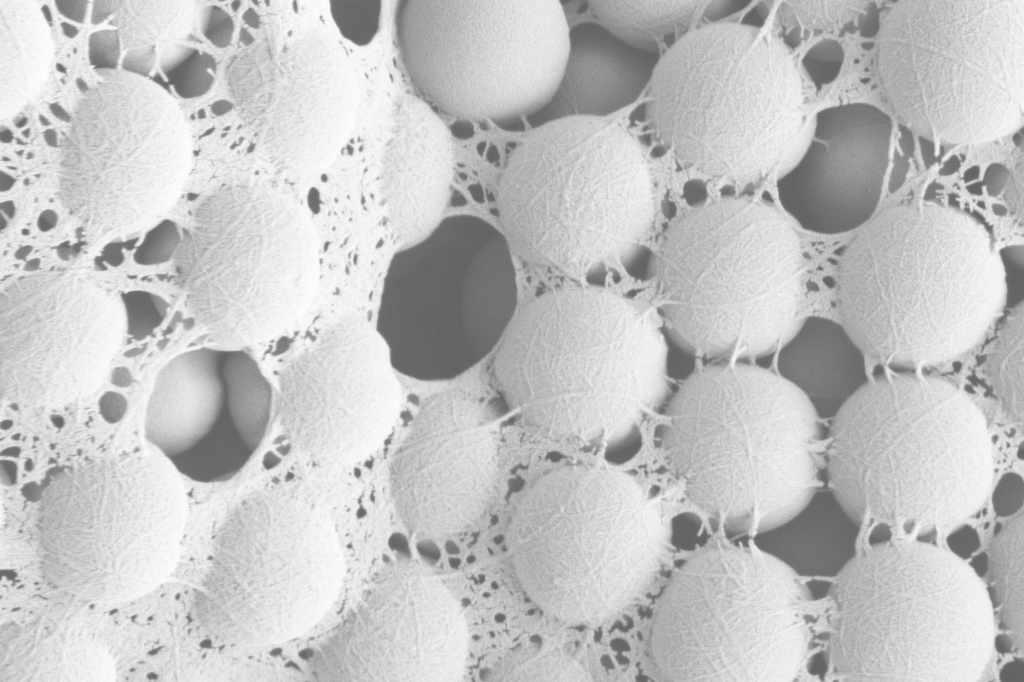 Researchers have discovered a completely new property in nanocellulose: it is capable of binding almost any particle and thus generating new materials so far unseen. This is based on the fact that the nanocellulose fibres, called fibrils, when placed in water, form a flexible, net-like structure that adapts itself to the particles.

The fibrils are extremely small, with a length of about one nanometre, or one thousand millionth part of a metre. Nanocellulose is made by grinding the fibres of ordinary cellulose, the length of which is in the scale of millimetrers.

Nanocellulose has the same light weight as cellulose, it can be used to produce structures as strong as metal, and it is non-toxic, renewable and biodegradable.

Nanocellulose is also able to compound particles of any type. The cohesion of materials often depends on how well the different types of particles can hold together.

‘With nanocellulose these limitations can be overcome,’ says Postdoctoral Researcher Bruno Mattos in a press release from the Aalto University.

According to the team leader Professor Orlando Rojas, nanocellulose can be used to combine metal particles with various microorganisms, such as yeasts. The particles combined can be both hydrophilic and hydrophobic. Thanks to this, it is possible to create material combinations that are completely new and have new functionalities.

‘This is an effective method that can be applied to many purposes. It forms a bridge between colloidal science and the development and manufacturing of materials,’ says Rojas.

Nanocellulose can be worked on in ambient temperatures. This is why it is also suitable with many sensitive, biological and surface-active particles which would lose their useful properties in high temperatures. The structures created in this way can be up to three times stronger than structures produced by sintering, that is, by compacting heated materials.

The research project is conducted jointly by the Finnish Aalto University, the Polytechnic University of Catalonia in Spain, the University of British Columbia in Canada, and the Brazilian Agricultural Research Corporation (Embrapa Florestas unit), and it constitutes a first step towards a new type of nano manufacturing.

‘In fact, a nanocellulose factory already exists, if by that you mean the fully automated generation of nanoparticles or the use of nanoparticles for shaping materials,’ says Research Fellow, Dr. Blaise Tardy from the Aalto University.

‘Still, the products thus created have a very limited range of use. ‘New research will make it possible to expand the range of applications,’ says Tardy.