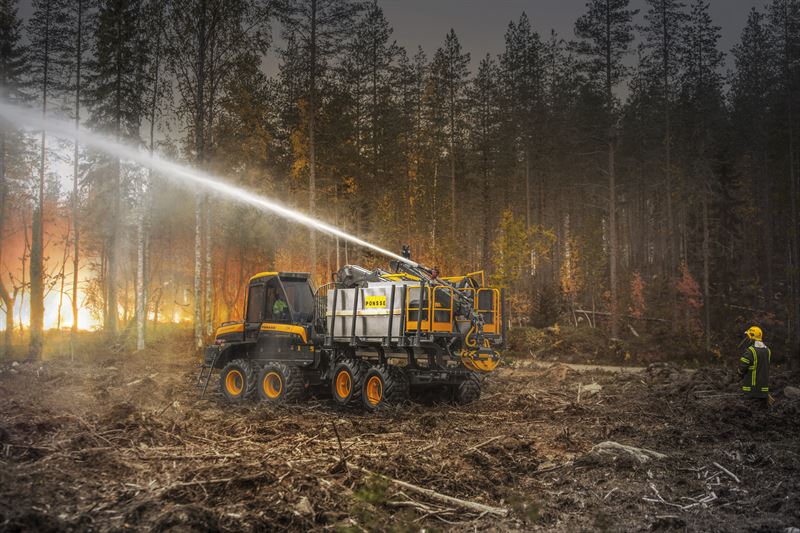 Firefighting equipment developed by Ponsse can be installed in the company’s Buffalo and Elephant forwarders. Photo: Ponsse

Ponsse is introducing firefighting equipment to be installed as extra equipment in a forwarder. Installed in the forwarder’s load space, the equipment is designed for extinguishing wildfires.

‘We have only just started selling it, but interest has been really lively all over the world. Requests for information have arrived from about two dozen countries,’ says Juha Haverinen, Product Manager for forwarders at Ponsse.

The firefighting equipment is brought to the fire site as one unit and can be used immediately after being connected to the forwarder’s hydraulics system. At other times the forwarder can be used for normal forestry work.

‘It’s hard to think of a better way to reach a wildfire site than a forwarder: it moves easily across difficult terrain and has a sufficient load-bearing and hydraulic capacity,’ says Haverinen.

Interest in firefighting equipment was originally expressed by rescue professionals and customers. ‘When the rescue services inquired if we could collaborate with them to develop such equipment, we were very keen to start,’ Haverinen says.

The unit contains a 10-cu.m water tank. It can be filled with its own pump either from natural waterways or from the tank of a fire engine. The tank material allows the use of various chemicals that can be mixed in the water, as well as the use of salt water.

The water cannon has a range of 47 metres and a 360-degree radius. The water spray can be directed by wireless remote control both horizontally and vertically. The spray pattern, too, can be adjusted.

The actual firefighting is the responsibility of rescue professionals. They operate the equipment and direct the work of the forwarder operator during the operation.

Wood-based foam to replace Styrofoam and other plastics