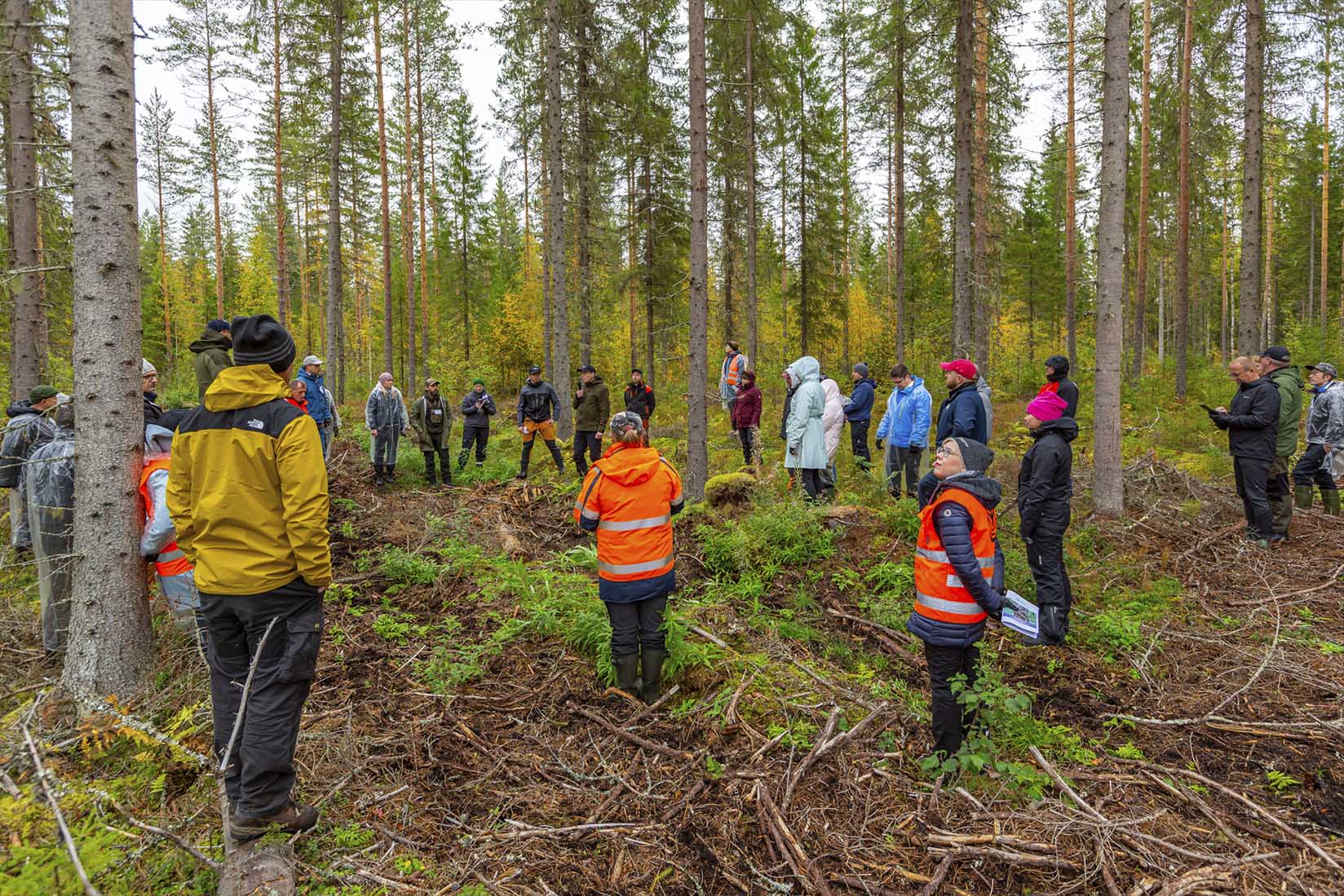 Continuous-cover silviculture, prevalent within the EU, can in Finland be best applied on peatlands with a natural availability of good seedlings. But it is not suitable for some sites at all.

’The best conditions for what is called continuous-cover silviculture are found in peatlands. There must be seedlings on the site that have sprung up naturally and have good growing conditions,’ says Saija Huuskonen, Senior Researcher at Natural Resources Institute Finland.

However, not all peatlands are equally suitable for this method.

’For example, peatland heaths with woody herbs often require a light breaking of soil surface for the seedlings to emerge,’ she continues.

The EU forest strategy aims at decreasing clear fellings. This should be replaced with continuous-cover silviculture.

The best conditions for what is called continuous-cover silviculture are found in peatlands. There must be seedlings on the site that have sprung up naturally and have good growing conditions.

Continuous-cover silviculture refers to a method where the felling sites are small or the trees to be feled are selected her and there. The method relies on a spontaneous regeneration of the tree stock. In other wods, new trees are not sown or planted, but come up from the seeds of the remaining trees.

Still, continuous cover is not applicable to every growing site. Huuskonen says that a managed, even-aged stand is difficult to convert to the continuous-cover method.

’For the seedlings to emerge, you must have sufficient light on the ground,’ Huuskonen says.

’Fellings leave fresh open surfaces on stumps and cause bark damage, exposing the stand to root rot, which will spread along existing root systems to young spruces that spring up naturally,’ Saija Huuskonen explains.

Huuskonen points out that silviculture may have many different objectives, including carbon sequestering, biodiversity, recreational use, revenue and well-being.

Metsähallitus, the company owning, managing and protecting the state-owned forests in Finland, has been set the target that the forest area under continuous cover should be 25 percent of fellings considered as regeneration fellings.

According to Natural Resources institute Finland (Luke), one quarter of the forests in Europe are under continuous-cover silviculture. The share is highest (50–90 percent) in south-eastern and central Europe, where most forests are found in mountainous aeas.

Luke reports that in notifications of forest use from 2020, less than five percent of all notified fellings were declared as continuous-cover fellings.

Metsähallitus, the company owning, managing and protecting the state-owned forests in Finland, has been set the target that the forest area under continuous cover should be 25 percent of fellings considered as regeneration fellings.

Metsähallitus reports that it uses the continuous-cover method particularly in forests popular for hiking and recreation and where landscape values have an important role. Other areas where the method is favoured are sites important for ecology, such as the lekking grounds of grouse.

An expert’s assessment of the method

The success and applicability of the continuous-cover method causes debate in the forest sector. Markku Remes, Senior Forest Management Specialist at the Finnish forest Centre, spoke about continuous-cover silviculture at the Forest Academy for Decision Makers arranged in September in Savo. The presentation focused on economics.

Remes stressed that his views are based on ’decades of experience and having practically been born holding a chainsaw’.

Remes said that in general, conventional forest management methods are fairly successful on peatlands, on what are called type 1 and 2 mires.

Success is likely on sites that  before draining were open mires or cominations of wooded and open mires. After draining these sites have turned into so-called type 2 cowberry, bilberry or grassy peat heaths.

’On such sites traditional fores management methods are generally fairly successful. The result will be a forest with several layers,’ Remes said.

By type 2 mires, Remes refers to forests that have grown up on old drained mires. These forests have developed after draining on open mires or so-called mixed-type wooded mires.

On mixed-type mires, the trees grow on tussocks. Between the trees there are open fen areas covered by low vegetation.

Some peatland heaths are difficult

According to Markku Remes, continuous-cover forestry is not successful on peatland heaths wit woody herbs and many peatland heath sites dominated by cowberry.

On these sites the woody herbs and the litter from more mature trees is slow to decompose.Mosses will grow on the ground.

’Tree seedlings have great difficulty to take root in this mossy layer. If any do sprout, they can easily perish at the early seed leaf stage,’ Remes explained.

Here, too, it’s not necessary to be strictly orthodox. If a peatland heath with woody herbs is manipulated,the result will be completely different. After manipulation there will be no problems with natural regeneration. But with no manipulation, it may take 50 years and still nothing much has happened.

However, as Remes pointed out, a peatland heath with woody herbs can be convereted to a good site for continuous-cover forestry by means of soil manipulation.

’Here, too, it’s not necessary to be strictly orthodox. If a peatland heath with woody herbs is manipulated,the result will be completely different. After manipulation there will be no problems with natural regeneration. But with no manipulation, it may take 50 years and still nothing much has happened,’ Remes said.

Remes noted that in the Savo region, for example, four fifths of the forest land consists of heath.

’Just taking a look at the field layer on a heath will reveal something. If you can see young trees that have sprung up naturally below the larger ones, then you can expect seedlings to germinate and thrive well and a stand will develop naturally and fairly rapidly. The rate of this will depend greatly on the ratio of pine to broadleaves,’ Remes said.

Remes pointed out that in Finland no site will remain without trees.

’If you’re not in a hurry or primarily looking for revenue, fellings during the transition phase will produce a layered forest,’ Remes noted.

’Continuous-cover and periodic silviculture are needed’

Heli Peltola, Professor of Silvicultureal Sciences at the University of Eastern Finland and member of the Finnish Climate Change Panel, says it is not useful toe differentiate categorically the different silvicultural methods.

’We need both forest management based on periodic silviculture, in which the different development stages of a forest can be clearly distinguished, and continuous-cover silviculture that relieas on selection and small-diameter fellings,’ Peltola said in an interview given to Audiomedia.

We need both forest management based on periodic silviculture, in which the different development stages of a forest can be clearly distinguished, and continuous-cover silviculture that relieas on selection and small-diameter felling.

According to Peltola, the use of continuous-cover methods is currently fiarly infrequent.

’They’re useful in recreation areas and neighbourhood forests, for example, where plenty of cover is preferable, and also in areas where natural regeneration is successful. The choice of silvicultural methods should take into account the nature of the site and the forest owner’s goals,’ she says to Audiomedia.

Peltola considers that continuous cover may be more profitable for the forest owner, because no regeneration or tending costs are createdAt the same time she points out that the site must be suitable for the method.

Increasing continuous-cover silviculture also poses other challenges, according to Peltola. It is often thought that continuous cover is a superior way of safeguarding forest biodiversity.

Here, Peltola reminds that the amount of decayed wood is an important biodiversity indicator.

’At the moment, leaving deadwood in the forest in connection with fellings under continuous-cover silviculture is not required in the same way as when regenerating forest under periodic silviculture.The current requirement of leaving retention trees only concerns clear fellings, but they should also be left in otherfellings, also under continuous-cover forestry, to ensure a deadwood continuum,’ Peltola stated to Audiomedia.