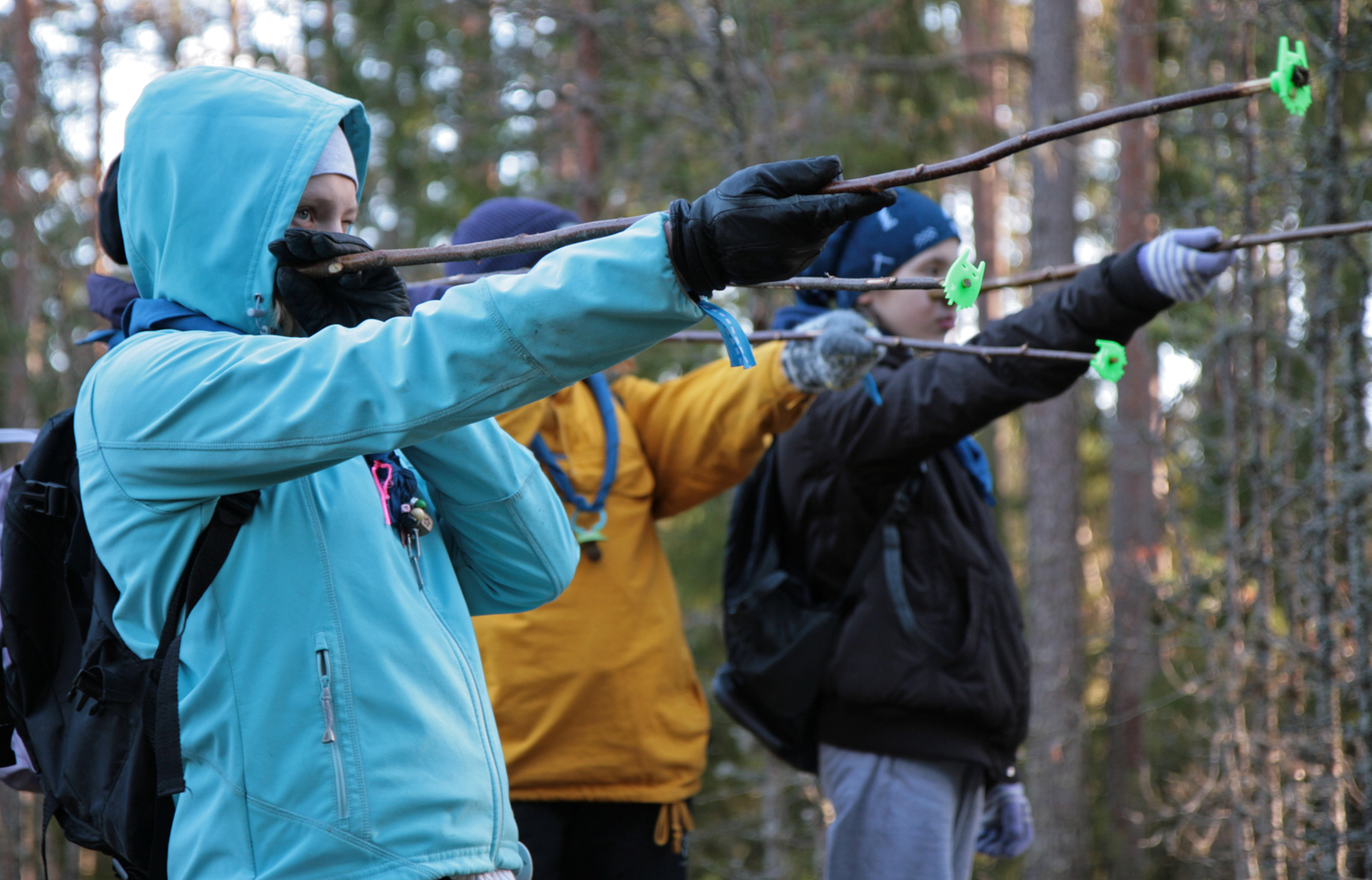 The finnish scouts and guides practises determining the height of a pine tree with a relascope. Photo: Anna Kauppi

The Scout Movement is known for its love of campfires and woodcraft, but what do scouts know about forestry? forest.fi visited a Scout event in Southern Finland.

“Of course, you should not fell all the woods, like perhaps in rainforests. But in Finland, forests are managed well, and new trees are planted after felling,” says 16-year-old Tinja Lantta from Lappeenranta. Her fellow scouts nod in agreement and considers timber to be a sensible raw material.

Lantta and her team have just practised determining the height of a pine tree with a relascope. Before that, they had the opportunity to climb into the cab of a forest harvester.

The event took place in the Teijo National Park, half an hour’s drive from the city of Salo. It is amazing how well the young participants know the concepts of forestry and the significance of the forest sector in Finland.

Many of the young guides and scouts call forests Finland’s green gold, and they are well aware that forestry is an important exports sector for Finland. “In Finland, scouting is, above all, hiking and camping in the outdoors, but it makes sense to learn about other things happening in the woods, such as forestry as a livelihood,” says Jaakko Nippala, coordinator of the Forest Programme in the Guides and Scouts of Finland.

“Besides, the guides and scouts also learn many skills related to forestry careers. For example, planting trees is often an activity during the jamborees.”

Many forestry professionals were scouts

The activity trail in the Teijo National Park was part of the Explo, an event organized in October in and around Salo for the Explorers, who are 15 to 17 years of age. Nearly 1,500 guides and scouts from all over Finland participated in the event.

One of the activities was to identify traditional forestry tools, such as the “pottiputki”, a simple but efficient planting tool invented in Finland. Identifying the tool is no problem for the scouts – but some find it hard to believe that the 150 million tree seedlings planted annually in Finland are set out one by one, without machinery. However, mechanical planting is rare and difficult to achieve efficiently in Finnish forests.

Nippala knows that many young people involved in scouting could become interested in forestry and careers within it. “Or, at least, many forestry professionals have been scouts or guides,” says Nippala, himself a Master of Agriculture and Forestry.

Nippala leads a two-year forestry project funded by the Metsämiesten Säätiö Foundation and the Finnish Forest Foundation. This year, the forest programme has been an integral part of the campaign “Together in forest”, with which the organization celebrates the centenary of Finland’s independence.

The goal of the campaign is to offer as many children and young people as possible a positive forest experience during the jubilee year 2017.

Though right now, on an outcrop of rock in the Teijo National Park, near the Matildanjärvi lake, the relationship to the forest as a source of livelihood is being tested to the full. Matleena Pelkonen, Eevi Kallio, Arto Tuominen, Arttu Hintsala and Petra Huttunen attempt to answer questions on forest-related products.

“Hey, what’s a viscose t-shirt?” “Does anyone know what species of tree cardboard is made of?” “What, is there wood in yoghurt?”

To begin with, questions related to the wide range of products of the forestry sector seem impossible for the young guides and scouts. But as they begin to find the answers, it becomes clear that they actually have a lot of knowledge about forests and also some interest in the forest sector.

Huttunen has considered the possibility of studying something related to the forest industry, Hintsala mentions that forest management is excellent in Finland, and the whole team believes that forests can and should be used within reasonable limits. “Of course, since forests offer renewable raw material.”

Guiding and scouting in Finland