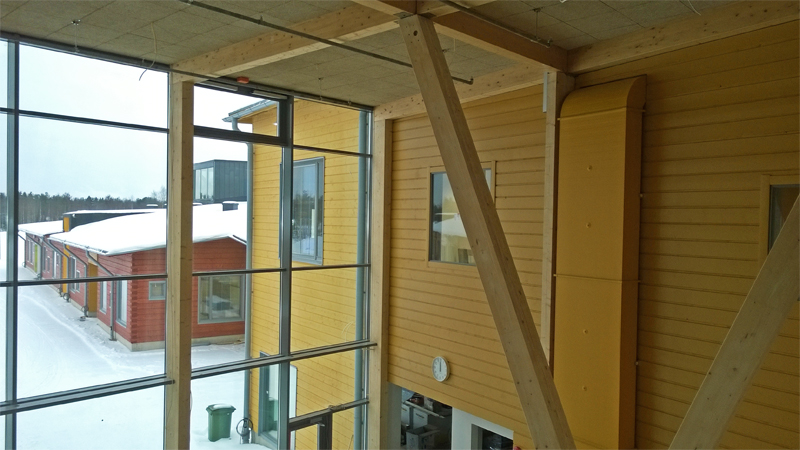 Large public construction projects using logs are likely to increase the interest of family house builders in using massive timber. What is reportedly the world’s largest log-built school will be completed in Pudasjärvi in Northern Finland in May.

On a construction site close to the Iijoki river and the national road from Oulu to Kuusamo, the last of the interior work is almost done. The log-built school centre is 10,000 square metres in size and will be completed on schedule in May.

“We have had close to 1,300 visitors from all over the world and so far, no one has heard of a log building bigger than this,” says Ms. Hanna Keskiaho, Purchasing Engineer at the construction company Lemminkäinen Talo Oy.

Visitors have come from Korea, Japan and Australia, but also from many Finnish municipalities. Log as construction material could be a solution to moisture problems – common in schools and other public buildings in Finland.

Problems with mould were also the reason why Pudasjärvi decided to invest EUR 23 million in a new school building. The town of 8,500 inhabitants had good experiences with logs from previous projects to construct a small residential area and a day care centre.

In a log building, the indoor air humidity remains within the optimal range, because of the capability of massive wood to release and absorb moisture. For the same reason, there is no mould at all.

Pudasjärvi boasts not only several log construction projects but also the biggest manufacturer of log buildings. Kontiotuote Oy produces more than 1,500 log buildings annually and exports them to 20 countries.

The company has also supplied and built the log walls in the projects of its home municipality. For the school centre, 28 kilometres of laminated log were needed. For Kontiotuote, that equalled 160 truckloads of logs and the factory’s entire production capacity for two weeks.

Mr. Jalo Poijula, CEO of Kontiotuote, says the interest in the world’s largest log-built school has had an impact on the number of invitations to tender. At the moment, Kontiotuote is preparing offers for five public construction projects.

According to Poijula, public construction projects using logs also increase the interest in single-family detached homes made of logs. Despite the recession in the construction industry, orders for prefabricated log houses have increased.

“A log house used to be thought of as the poor man’s building, both creaky and draughty,” Poijula says. “Now, the log-built school centre and other public buildings will increase confidence in the use of logs as construction material. The new generation wants to build log houses because of their healthy indoor air.”

The walls of the school are made of wood all round – even inside the building. The laminated logs are 275 millimetres thick and no additional isolation is needed. The interior walls are also mostly made of logs.

Many visitors cannot resist running their hands on the surfaces, which look and feel like natural wood, despite the protective finish.

In addition to healthy indoor air, a log building can offer a peaceful learning environment. Keskiaho likes to take her visitors next to a classroom window, behind which log trucks thunder along from Kuusamo to Oulu.

“Can you hear anything?” Keskiaho asks, visibly pleased at the silence.

Poijula mentions an Austrian study in which schoolchildren were observed in classrooms made of either solid timber or concrete. Those who spent their school day in timber classrooms had a slower pulse.

A builder opting for logwood may also rest easier because it is a very ecological material. Poijula likes to point out that a log building is environmentally friendly in more than one way.

First, logwood is the only construction material that is energy positive, because burning the by-products of log production generates more energy than is consumed in manufacturing a log house. Second, the log acts as a carbon storage.

“A medium-size log house contains about 30 tonnes of wood. It binds more or less the same amount of carbon dioxide as is generated by driving a passenger car for 400,000 kilometres,” Poijula compares.

Lemminkäinen constructs the logwood school campus on a life cycle principle. This means that the construction company also assumes responsibility for the management and maintenance of the completed building. In the Pudasjärvi school, the agreement will run for 25 years.

“You can make a deal on the life cycle principle provided you accept that it is impossible to know what will happen in the next few years with the number of pupils, for example,” says Keskiaho.

To improve adaptability, the school centre is modular in construction. For big events, classrooms can be combined with the entrance hall. If the population of Pudasjärvi should decrease, it is possible to use the four buildings on the log-built campus for other purposes by, for example, converting the classrooms to single-occupancy flats for the elderly.

Pudasjärvi will also be able to offer service flats in logwood buildings in the near future. Lemminkäinen and Kontiotuote have already started a new co-production project – also based on the life cycle principle.