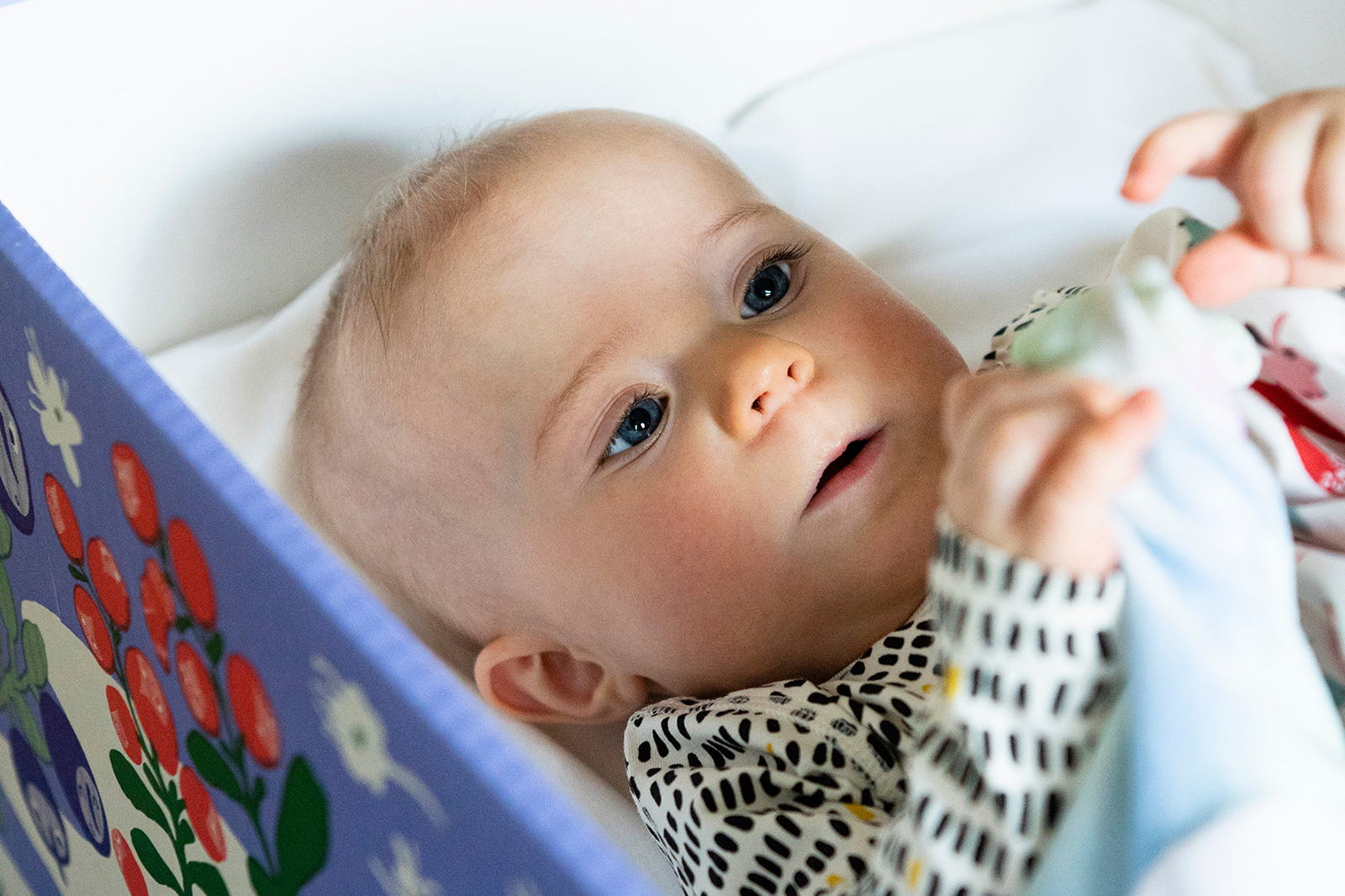 The box may be used as the child’s first cot – together with the mattress and blanket included. Photo: SII, Veikko Somerpuro

The production of paperboard continues to increase even in 2021. Online businesses need cartons and the food industry requires sturdy, high-quality packaging. The all-time greatest innovation using a box made of corrugated paperboard was, however, introduced in Finland about 80 years ago.

The Finnish baby box, which saw the light of day in 1937, can rightly be regarded as a veritable packaging innovation. It contains a selection of items needed by the newborn baby and the family: garments, blanket, bath towel, bib, and so on.

The family of every baby born i Finland receives the box if they so choose. Elsewhere, maternity boxes of different types are distributed in at least 63 countries under 91 different programmes.

The baby box is more than just a carton filled with things. In many countries, the family finds in it information related to the health and upbringing of the child and also information on reproductive health.

In Finland the baby box has been distributed since 1937, initially to parents with limited means. After World War II, starting in 1949, it has been given to all families with a newborn baby. To begin with, the ’box’ was an enamelled wash basin, which was later replaced with a box made of corrugated paperboard.

A baby box is extremely important, especially in poor countries such as Finland was during the 1930s and 1940s. For one thing, it is an excellent way of encouraging disadvantaged parents to register their child with health care services.

Demand goes up by nearly two percent each year

The Tampere University has conducted a study interviewing 29 baby box programmes. In 16 of them, the box is made of paperboard, which is a sturdy and safe material. These are also properties thanks to which the demand for paperboard has reached high figures in recent years.

Jenni Kärkkäinen, Principal (Packaging) at the consulting company Afry, divides the paperboard market into folding boxboard used in consumer packaging and corrugated paperboard used in industry, transport and users such as online businesses.

’The size of the market for folding boxboard, liquid packaging board and paperboard for cups is about 45 million tonnes a year, and it grows by about two percent per year. The market for corrugated paperboard grows only a little less, but it is produced in much greater quantities. Last year, for example, the demand was 169 million tonnes,’ says Kärkkäinen.

Kärkkäinen goes on to say that a paperboard packaging is sturdy and provides good protection for the contents. Its raw material is wood-based and thus renewable, it is recyclable and in most cases will be recycled. If made of primary instead of recycled fibre, it is also guaranteed non-toxic and safe.

As regards the packaging of food, paperboard still needs further development, and plastics continue to be popular here. ’This is why various solutions for protective layers for paperboard packaging are being developed with great enthusiasm,’ Kärkkäinen says.

Kärkkäinen stresses the advantages of the long fibres derived from softwood in the north in particular. ’These fibres make sturdy yet lightweight paperboard,’ she says.

Many think that paperboard packaging can only be used once, but this need not be the case. A good example of this is the baby box. It can be used for many different purposes and even for decades.

Thanks to its design the box may be used as the child’s first cot – together with the mattress and blanket included. This is not unimportant: in the box, the baby can sleep in the same room as its parents, yet not in the same bed with them. Both of these things reduce the risk of sudden infant death syndrome, or cot death.

It is precisely the fight against cot death that lies at the centre of the baby box programmes. Of the 29 programmes interviewed in the Tampere University study, ten strove to prevent cot deaths.

Since the early 1960s, the Finnish baby box has been made of paperboard by Stora Enso. ’As a rule, we make the paperboard and also the box, complete with printing, at the packaging facility of our Lahti mill, but a couple of times someone else has won the contract for actually making the box. The box appearance is decided by the client, which is the Social Insurance Institute of Finland,’ says Satu Härkönen, head of Finnish media relations at Stora Enso.

Originally the box was very simple, with no added colour or printing. Nowadays the appearance is designed by packaging professionals, and there have even been competitions for the design.

Paper mills are converted to paperboard

With the decreasing global demand for paper and increasing demand for paperboard, one of the ways for forest industry companies to adapt to market changes is to convert mills from paper to paperboard production. However, this is not enough to make up for all the paper production lost.

To cite an example, Stora Enso has converted its Varkaus and Oulu paper mills to paperboard production, while deciding to close down its paper mills in Veitsiluoto (Kemi, northern Finland) and Kvarnsveden (Borlänge, central Sweden). A changeover is not feasible in every case, and the decision is affected by several factors.

’Generally speaking, the mill’s cost competitivity after conversion, its location in relation to the markets, the market situation of the envisaged product, the mill’s suitability for conversion and the availability and price of raw material must be taken into account,’ says Kärkkäinen.

Baby box is the best alternative in the most disadvantaged areas

In Finland in 1949, the baby box corresponded to a significant sum of money, equal to one third of the average monthly wages of an industrial worker. These days families may choose between the box or a cash benefit of EUR 170.

Practically all first-time mothers choose the box, and even of families with more children, only a third opt for the benefit.

Most baby box programmes are operated in countries with low or middle income levels, such as Finland was 80 years ago. Some exceptions to this are the United Kingdom and Ireland, where the baby box made a breakthrough after the BBC broadcast programmes extolling its virtues. Some US states, such as Alaska, also run baby box programmes.

Just as in Finland in the 1930s, one goal of the baby box programmes, especially in poorer countries, is to ensure that children and families with children can be reached by health care services. In Finland, a condition for receiving the box continues to be that the mother registers with a prenatal clinic.

Baby boxes may also be of great help in disaster areas. Where people have completely lost their homes in a natural or other disaster, a baby box may save the life of a newborn.

The baby box programmes, linked with other support and education, are run by many different bodies from small, non-profit associations to great governmental organisations. Universities have been very active in developing programmes linked to baby boxes.

The most successful programmes are those adapted to local conditions. Part of the local dimension is related to the material and contents of the box. As far as feasible, they should be produced as close by as possible and of the safest materials possible.

In this sense it is natural that the Finnish box is made of corrugated paperboard, as is the case in many other countries.

Of the 29 programmes interviewed by the Tampere University, 16 used a paperboard box, and in 20 the box could be used as a cot. Other materials used were plastic and fabric.

The video by the Finnish Forest Association describes the use of wood at all stages of human life: from a paperboard box to a wooden funerary urn.

Coordinator Veera Petäjä at the Social Insurance Institute of Finland was interviewed for this article.

Mouse’s nest to a box for love letters

The baby box of corrugated paperboard can be used in a multitude of ways. We listed some of the most popular and most unexpected.

A very exciting study! We in Europe should start a campaign producing these baby boxes for the Syrian refugees. Could Amazon invest a part of the sales-profit, made through corona crisis, for those poor people!